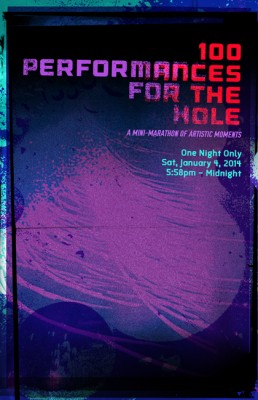 There’s a hole under the gallery floor at SOMArts. And art abhors a vacuum.

This century-old sand casting pit rests under a trap door, a leftover of the 17,000-square-foot venue’s industrial past. But this weekend the hatch is lifted and the hole becomes a generative site of time-based art making. Six hours will see more than 150 local artists delivering two-minute performances “for the hole” in a mini-marathon like no other.

If you can’t be there in person, SOMArts will stream the event live on its website (at least those portions suitable for broadcast under BAVC standards), and public access station SF Commons (Comcast Channel 76, Astound Channel 30) will also broadcast.