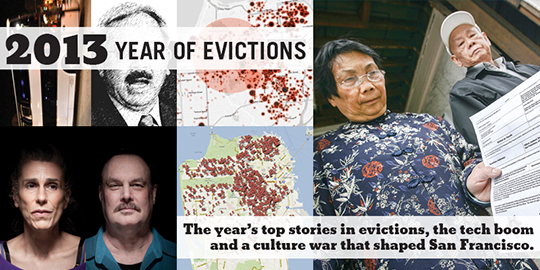 This New Year’s Eve we take a look back at a hard year for many San Franciscans, what many in the future may call our Year of Evictions. After reading our retrospective, check out our interactive timeline below, where we chronicle flashpoints in the year of evictions and San Francisco’s tech culture war. Did we miss something? If you’d like to submit an event and date for the timeline, email joe@sfbg.com.

San Francisco’s political dynamics shifted significantly in 2013 as concerns about affordable housing, gentrification, and displacement shot to the top of city’s agenda, forcing elected officials to scramble for solutions.

The growing urgency of these issues can be tracked by the evolving statements and positions of Mayor Ed Lee over the course of the year, as well as the increasingly assertive actions of the progressive movement for housing justice, which caught fire and began to garner national headlines on a regular basis by the year’s end.

It’s true that affordable housing and cost-of-living issues were already a major concern a year ago, on the heels of voter approval of Proposition C and the creation of the city’s Affordable Housing Fund in November 2012. That compromise measure was created by Lee and his downtown allies, working with Sup. John Avalos and progressive groups.

But early in 2013, it became clear that the measure wasn’t enough to prevent rapid, escalating displacement of low and middle-income San Franciscans, and that the overheating real-estate market — driven by an influx of new employees at technology companies that Lee had courted and supported with big tax breaks — was rapidly changing the face of the city. Meanwhile, Lee’s administration also faced a Housing Authority imbroglio as a former director parted ways amid allegations of corruption, while the agency’s deep financial troubles left dilapidated public housing units in disrepair.

Lee and his allies at first tried to stay the course, giving only lip service to the affordability problem early on.

“Though some may wish otherwise, we cannot defy the law of supply of demand within our City limits,” Lee said during his state of the city address on January 28. The tone of his speech was triumphant as Lee emphasized the growth of the tech sector.

“We have given renewed confidence to leading high technology companies like Salesforce, Yelp, Zynga, Twitter, Square, Autodesk, Riverbed, Airbnb and so many more to stay and grow in our City,” Lee said during the speech. “We’re even attracting growing companies … to pull up stakes and move to the new gravitational center of Silicon Valley — San Francisco.”

But by the time November rolled around, even the New York Times was noting that “As the center of the technology industry has moved north from Silicon Valley to San Francisco …income disparities have widened sharply, housing prices have soared.” (“Backlash by the Bay,” NYT, 11/24/13).

It took almost an entire year, but the mayor’s ardent embrace of tech is starting to give way to the realization that a growing movement for equitable housing was steadily gaining ground and that it was something the city’s politicians would ignore at their peril.