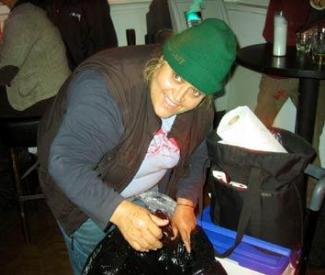 The Tamale Lady, aka Virginia Ramos, finally has a restaurant to call her own (for real this time).

Mission Local reported today that Supervisor David Campos has secured a storefront for the Mission’s favorite bar-hopping foor purveyor, a location at 16th and Mission.

“It will be her very own place,” Albee says. “We pulled out all the stops, and it took six months, but we found a place.”

Campos told us about the 16th and Mission location in a text message last week, which Albee says was going to be a secret until they signed the lease and had a press conference likely in January. “He was not supposed to tell anyone that,” Albee sighed. “Oh, David.”

Campos confirmed with the Guardian that Ramos will have her own storefront, saying “You can imagine she was real excited. It has been a life long dream for her to have her own space.”

The Tamale Lady has served up the goods for Missionites for years, but in June was barred from the ever-popular bar Zeitgeist after the Department of Public Health starting cracking down on street vendors, which the Guardian’s Marke B. covered. We’re just happy she’ll have a new home. They have not yet signed the lease, but are anticipating everything to be finalized in January.