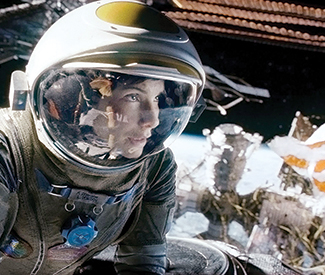 YEAR IN FILM What the hell am I watching? I muttered that phrase many times in 2013, with interpretations ranging all over the cinematic map. There was a sense of amazed “How did they do that?” during Gravity; feelings of intrigued unease during Upstream Color and The Act of Killing; and a genuine feeling of befuddlement as a book I thoroughly enjoyed, World War Z, was transformed into a puddle of CG mud with Brad Pitt bobbing at its center.

It was a year full of memorable images, for better and worse. I won’t soon forget The Counselor‘s car-fucking sequence; The Conjuring‘s creepy Annabelle doll; or the sight of Jonah Hill becoming possessed by a demon in This is the End (or by a handful of well-aged Quaaludes in The Wolf of Wall Street). On the other hand, I’ve been struggling to remember anything that happened in the number one movie of the year, Iron Man 3.

That’s not Tony Stark’s fault. Mega-budget films like Iron Man 3 make high box-office numbers their top priority. To sell a lot of tickets, you have to appeal to as many different kinds of filmgoers as possible; the avoidance of sharp edges and left-field insanity is to be expected. But there’s hope to be found in films like Alfonso Cuarón’s Gravity, the sixth-biggest moneymaker of the year, which married crowd-pleasing suspense and technical beauty (that 3D!) to a surprisingly stark, profound story about loneliness and loss.

Gravity was among many films this year that lingered on themes of fear, abandonment, and forced self-reliance. The other big example: J.C. Chandor’s All is Lost, which sets a solo sailor — Robert Redford, one of few movie stars with as much built-in audience goodwill as Gravity‘s Sandra Bullock — adrift on a perilously leaky vessel. Unlike Bullock’s Dr. Ryan Stone, Redford’s unnamed salty dog isn’t gasping for oxygen (yet …), and he’s scrambling to survive sudden storms instead of onslaughts of space junk. But Redford’s plight might actually be the tougher one. All is Lost offers neither exposition nor any room for existential reflection. (Hell, it barely offers any dialogue; no wacky Mardi Gras stories from George Clooney here.) We have no idea who Redford’s character is, or why he’s puttering around alone on the Indian Ocean. Compared to Ryan, he remains calm as each new calamity presents itself. But both characters — she, a rookie in space; he, a seemingly experienced seaman — scramble to read instruction manuals when they find gizmos that might help them survive, even for just a few more moments.

The stakes are less dire for the lonely protagonists of Spike Jonze’s Her and the Coen brothers’ Inside Llewyn Davis. And you kinda get the sense that both Her‘s Theodore (Joaquin Phoenix) and Inside‘s Llewyn (Oscar Isaac) have only themselves to blame for their ennui. But unlike Llewyn, who bumbles his way through a 1960s New York folk scene riddled with mistakes he’s only recently begun to regret, mid-21st century Los Angeleno Theodore finds a coping strategy that brings him joy. Even when the “relationship” he’s cultivated with his computer operating system hits the expected snags, Jonze sneaks a little bit of optimism in there. By the film’s end, Theodore’s intimate brush with technology has guided him toward some very human soul-searching — again, unlike Llewyn, whose story finishes exactly where it began.

Gabriela Cowperthwaite’s Blackfish — a documentary investigating the 2010 death of a SeaWorld trainer at the jaws of a male orca named Tilikum — also brought a tale of isolation to the forefront. It’s capped with a lingering shot of the giant animal hovering, motionless, in a solitary-confinement tank. Home sweet home. Thoughtful and provocative, Blackfish avoids sensationalism, adding interviews with killer-whale experts to its slate of ex-SeaWorld employee talking heads. It’s not simply an exposé of a specific attack, though it does contain footage shot just before the Tilikum incident. It’s an indictment of an amusement-park industry that puts profits above the safety of its employees, and tries mightily to turn intelligent, unpredictable animals into goofy attractions.

And greed, as it happens, was another big theme for 2013. It’s a topic that lends itself to high-energy tales of ill-gotten gains and dramatic tumbles, with stakes as meaningless as the designer handbags snatched from Paris Hilton’s closet by Sofia Coppola’s Bling Ring bandits — or as huge as the political careers toppled by the antics of American Hustle‘s con artists and slippery FBI agents. Nowhere was this familiar story arc so gleefully explored than in Martin Scorsese’s The Wolf of Wall Street, which — like Bling and Hustle — was based on a true story. Even better, its tale of 1990s stock-market swindling is based on the book written by the fiend who lived it (Jordan Belfort, played by Leonardo DiCaprio), and shot by Martin Scorsese with top-of-his-game panache.

In a parallel universe, someone might make a film casting Belfort as the villain. Here, he’s the obnoxious, thieving, narcissistic, witty, scheming, drug-gobbling douchebag you hate to love. What the hell am I watching? The birth of an antihero, 2013-style. *

Leonardo DiCaprio vs. the stairs, The Wolf of Wall Street