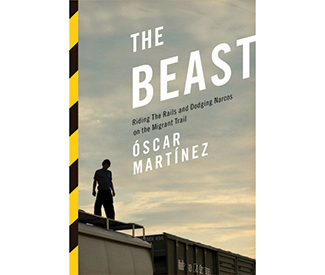 P>From 2007 to 2010, Salvadoran journalist Óscar Martínez made six different excursions on The Beast, a rusted freight train that carries Central American migrants throughout Mexico on their journey to the Southern U.S. border. His vivid, eye-opening account is now available in English, in a recently published edition titled The Beast: Riding the Rails and Dodging Narcos on the Migrant Trail, by Verso Books.

The Beast documents the lives and stories of some of the thousands of migrants who make the perilous trip annually. Whether they are heading north to flee violence in their home countries, or simply in pursuit of una vida mejor (a better life), the migrants who embark on this journey expose themselves to untold risk. The trail leads them isolated Mexican territories where the rule of law holds little sway, and bandits affiliated with drug cartels lie in wait of vulnerable targets.

Some of the figures are appalling: An estimated 20,000 of the quarter million Central Americans who journey along the migrant trail annually are kidnapped along the way. Rape is so commonplace in some areas that coyotes aiding women who venture north frequently give them condoms, with instructions to tell their attackers to use them. “They tell them, trying to fight isn’t an option. Not in that jungle,” Martínez said during a recent book reading at Modern Times, relating what he’d learned from migrants while riding The Beast.

Even more alarming is that the everyday violence afflicted against migrants received scant press attention until Martínez highlighted it. And there are dishearteningly few examples of prosecution targeting those who prey on migrants.

More impressive than the considerable risk Martínez took on to get the story was the level of depth and understanding with which he portrayed the migrants he encountered. He did this by getting to know them, spending hours in their presence, and relating to them by learning the slang used on the migrant trail.

Sometimes he would invent a character in order to slip past gatekeepers who sought to keep journalists out. He pretended to be a john when venturing into a brothel in Chiapas, to get the stories of the women profiled in a chapter titled “The Invisible Slaves.”

“Sometimes, you drink a beer and have a conversation, not an interview,” Martínez said during a book reading at San Francisco’s Modern Times Bookstore Collective. “The migrants, they are very kind to talk to me,” he added. “If you’re on the most dangerous trip of your life, why are you going to talk to a guy who asks you stupid questions for hours?”

Martínez produced the series for El Faro, an online publication based in El Salvador that seeks to produce in-depth, long form reporting.

He initially published a compilation of his experiences dodging narcos and killers on the train in a book titled Los migrantes que no importan [The migrants who don’t matter] in 2010. The Beast was named one of the best books of 2013 by the Financial Times, and has earned praise from the New Yorker.

“We spent a lot of time with the migrants beforehand,” he explained when asked how he gained the trust of the people he wrote about. “The project allowed us to do that. We had the time. That’s impossible to do with the rhythms of conventional journalism.”

Since El Faro is funded through private contributions and grants from foundations, it’s geared toward generating the sort of in-depth, well-researched, carefully crafted journalism that has the power to bring about real change.

“To understand, you need time,” Martínez said. It was only after six harrowing journeys, he said, before “I understood the train.”

Now he is working on a project with El Faro called Sala Negra, investigating gang-related violence in Central America. It’s a dangerous occupation, but Martínez believes he is fulfilling his obligation as a member of the press by bearing witness to the violence taking place in Central America. “Not talking about organized crime is not an option,” he said. “Organized crime is a part of the society.”