Home "Why'd you do it?" we ask Fake Google employee Max Bell Alper 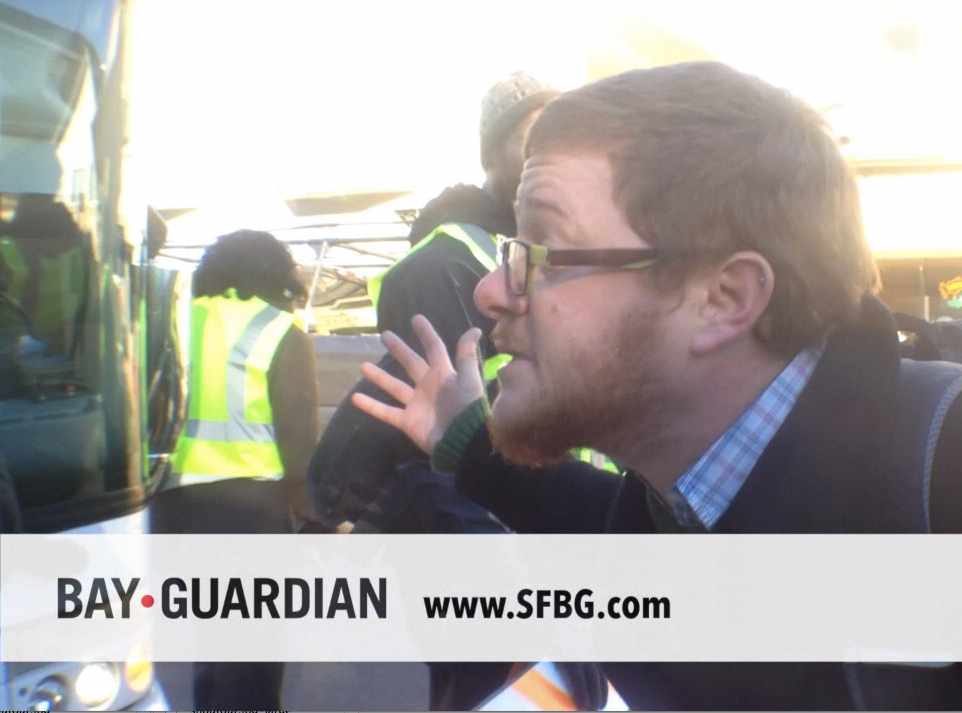 Within a half hour of our original post on today’s tech gentrification and transit protest, the Guardian learned that Max Bell Alper, a union organizer with Unite Here Local 2850 was the man shouting down Google bus protesters earlier this morning. We asked Alper what motivated him to impersonate a Google employee.

You can read the original post, with updates, here.

Alper maintained that he meant no deception, and that it was all “political theater.”

“This is political theater to demonstrate what is happening to the city. It’s about more than just the bus,” he said. “These are enormous corporations that are investing in this community. These companies, like Google, should be proud of where they’re from and invest in their communities.”

And the effects of the tech boom are strong, are real, which the thousands of long-time San Franciscans priced out of the city can attest to. The Bay Guardian has covered this extensively, which is what led us to cover the protest. Unfortunately for the organizers of this morning’s Google bus protest, all of their work may now be for naught.

Some of the protesters feel duped.

“No I did not know him, he didn’t tell me that he was going to be doing that,” said Erin McElroy, who since January has led the Anti-Evitction Mapping Project. A part-time nanny and caretaker for the elderly, she’s poured hours of her downtime into the project. The protest was supposed to highlight an issue that for the past year has been her life’s work.

McElroy is the one being screamed at in this video:

“I’m really upset that this happened. We’ve calculated about 11,000 no fault evictions since 1997,” she said. And the evictions only count units — there’s no telling how many people were in each unit. Many other tenants are bought out of their rentals as well, displacing tenants in what critics call “invisible evictions.” The plight of long-time San Franciscans may be lost in the shuffle over Alper’s deceptions.

When asked if he intentionally intended to deceive media, he replied “People are talking all over the country about what’s happening in San Francisco (referring to evictions and displacement). That’s the debate we need to have here. The more we talk about it, the more we think about it, the more we’re going to see the tech companies need to contribute.”

Alper said that he did not intend to engage in theater before going to the protest, but when there made the decision, “spontaneously,” to stage the argument. When he maintained his story that this was political theater, we again asked why he did not verify his name at the protest itself — and only after the story blew up in national and local media.

“This was improv political theater,” he repeated.

I don’t know whether to laugh or cry at local media not recognizing well-known local organizers.

Alper came to the protest in a backpack and dressed in a button down shirt, which some readers via Twitter and comments rightly pointed out may have been his “tech costume,” suggesting he planned the theater beforehand. Indeed, his performance was impeccable, mirroring snarky and shallow comments made by tech luminaries like Peter Shih just a few months ago.

The Guardian noted this, asking him how he came to show up in near perfect costume for his tech theater. “This is what I wear everyday,” he said.

McElroy didn’t want the larger story to get lost in the shuffle. “I understand it was a highly dramatic moment people were drawn to,” she said. “But I wish people would pay attention to the larger systemic issue of tech capital creating a particular class in San Francisco that’s displacing long-time residents.”

Leslie Dreyer, one of the protest organizers, said that though Alper’s shoutout turned out to be a deception, riders on the Google bus itself were making plenty of snarky comments of their own, which she captured on a camera she was wearing as she entered the bus.

“People were shaming others for even talking to me,” she said. “A person tried to read (my pamphlet) and people said ‘no don’t take anything from them!'”

In the Guardian’s original post we clarified that though it appeared Alper got off the bus and was late to work, as he repeatedly claimed, we had not verified that he was an employee. We did identify him as an employee in the headline, which we quickly amended.

In fact, we actively asked for news tips as to his identity, listing the news@sfbg.com email address to solicit help. Tips flowed in within 20 minutes of the original post. Anthony, a recent San Francisco ex-pat, emailed us identifying the shouting man as Max Bell Alper, a union organizer. The Guardian took time to confirm this, comparing photos and calling other sources. Ex-Guardian reporter Yael Chanoff interviewed Alper during her extensive coverage of the Occupy protests some time ago, as some have pointed out, but as she no longer works here she was not around to identify him quickly. The reporter who covered the event today only covered one night of the Occupy protests, the night Scott Olsen was injured, and had no experience with Alper.

When we confirmed Alper’s identity, we immediately amended our post. Many, including San Francisco Chronicle reporter Ellen Huet, asked if our tweet contributed to the mis-identification problem as well. We tweeted back “Mistakes should stand, and lets correct, not erase them.”

That’s exactly what we did.

@ellenhuet @susie_c @juliacarriew True. But I don’t believe in deleting tweets. Mistakes should stand, and lets correct, not erase them

The story quickly went viral, featured on the blogs SFist and Valleywag. SF Weekly covered the aftermath. The time between our original posting and our correction was 56 minutes.

“Many people put hours into this [protest],” McElroy said. And many more San Franciscans are losing their homes. Let’s hope once people are done talking about Alper, they talk about that.