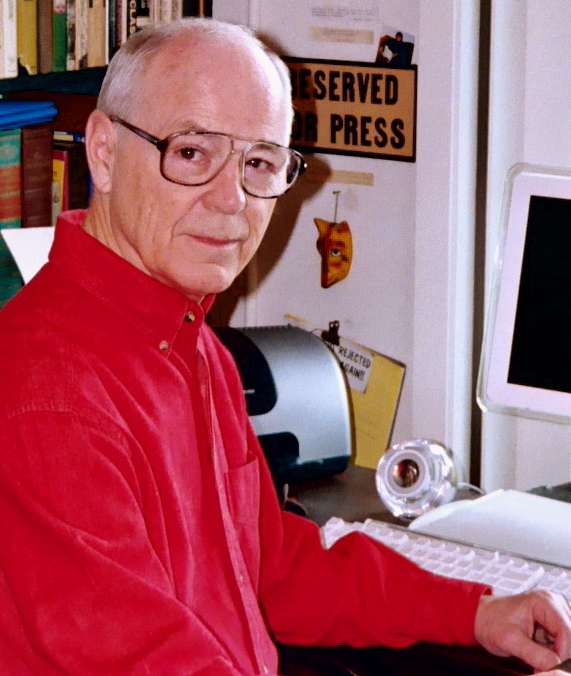 Guardian columnist Dick Meister is a longtime Bay Area journalist. He can be
reached at www.dickmeister.com, which includes several hundred of his
columns.
OK Nike, pay up! You owe me big. Exactly how much, I can’t say, since I
don’t know the going rate for athletes and others who act as human
billboards for you. You know, those whose team uniforms, workout gear and
other garments display your swoosh brand symbol prominently.

I assume the swoosh-marked college athletes are not paid openly, lest they
lose their amateur status, although their colleges, while profiting from the
athletes’ play and display of the swoosh and other brand symbols, of course
face no penalties for doing so.

My days as an athlete are long gone and, sad to say, there were no swoosh
contracts back in those days. But now, I think, it’s time for me to collect
a little.  You see, I was recently quite ill, and on leaving the hospital
was under strict orders to go easy and, among other things, to wear light,
loose fitting clothing.  No tight jeans and such.

But sweatpants, they’d be perfect. So I popped into by favorite clothing
establishment and grabbed a pair of sweatpants off the rack without
bothering to check anything but the size. Didn’t even try them on.

Oh, but when I got the pants home. The shock! the shock! There it was on the
side of the left leg, the dreaded swoosh for all the world to see on my
daily doctor-prescribed walks and other sweatpants-clad forays into the
community. I had become a walking billboard for Nike.

So where’s my endorsement money, Nike? My pay. I’m working for you, after
all. Do I have to bring in a union to get me what I ‘m owed? I’m not asking
for much, just whatever you’re paying other human billboards. I’m not
exactly a celebrity, but I am known rather well . . . and highly regarded, I
like to believe, in some parts of my community. Seeing me wearing the swoosh
might influence some of my neighbors to rush out and buy their own Nike
gear. Naturally.

But realistically, I must tell you it’s not likely I’ll get paid for my
valuable work on behalf of Nike. Big time athletes are paid, and paid well
for wearing and endorsing the swoosh. But not us plain folks who wear the
Nike brand.  We need a union to demand decent pay . . . to demand decent
treatment.

That’s it, a union to demand decent treatment for all who wear the Nike
brand . . . plus the money they should be owed by Nike for doing so. There
are, of course, unions of professional athletes. But their concern, as I
guess it should be, is for their members. We need to form a union of our own
to also get the big bucks for wearing the swoosh.

And while we’re at it, we could use the leverage of our union to effectively
demand much better treatment for the workers in Nike sweatshops in poor
countries who produce most of the swoosh brand stuff.  Nor should we forget
the celebrity athletes whose huge pay for endorsement of Nike products
drives up the price we ordinary folks have to pay for sweatpants and other
gear that the celebrities endorse only because they are paid to endorse
them.

It’s highly doubtful that any of our spoiled, hugely paid athletes would
readily agree to share their endorsement money with lesser-paid citizens.
But with a union, who knows? Professional athletes have their own powerful
unions, so why don’t their unions take up the cause of unpaid Nike
endorsers?

That’s one of the basic principles of unionism, unions seeing that their
members get a fair share and helping members of other unions get their fair
share. You know, solidarity and all that.

So, swoosh wearers, unite! Unionize! We have nothing to lose but our
swooshes!

Guardian columnist Dick Meister is a longtime Bay Area journalist. He can be
reached at www.dickmeister.com, which includes several hundred of his
columns.