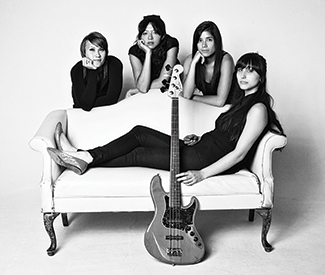 [Update: La Luz was in a car accident during its tour and will no longer be playing these shows. The accident totaled the van, destroyed the gear, and band members suffered injuries. To donate, click here]

TOFU AND WHISKEY Sometimes the unexpected can rip you apart. It can gnaw at your insides, leave your stomach in knots, and twist your thoughts into a confused, messy blur. And sometimes, those rare unanticipated moments can inspire you anew. All the hurt and bewilderment and dark emotions reconfigure and morph into a project, such as an album.

It’s Alive was built from death. “When something that dramatic happens, it could either crush you or give you a crazy energy,” Cleveland says. “For me it was like, after I came out of just being really depressed for awhile I was really inspired to….I don’t know exactly how to phrase it. It’s kind of a weird thing to talk about, I guess. It’s so heavy.”

That heavy moment took place May 30, 2012, when a deranged shooter burst into a Seattle café — Café Racer, where Cleveland and her friends routinely hung out — and killed five people. Around the corner from her house, it’s where she first met La Luz bassist Abby Blackwell. On that spring day last year, it’s where her friend Drew Keriakedes (otherwise known as “Shmootzi the Clod”), a vaudeville-style singing circus clown, died, slain in the rampage.

She describes him as always giving open, honest performances that made everyone fall in love with him — that performance style informed her own artistry. And the months after the shooting informed her songwriting. Though she also notes an intuition affected the record.

“It’s weird because a lot of the lyrics I wrote before the shooting happened and then a lot of them I wrote after. But then when I looked back…I kept seeing these weird premonitions. It just seems like the air was really heavy with this insane event and I was sort of channeling this crazy shit that was about to happen. This sounds kind of New Age-y. But when I looked back over the lyrics I was just like, ‘holy shit!’ I think I just felt something in the air.”

That gloom bled into It’s Alive, a record equally inspired by legendary surf guitarist Link Wray, who also lent a darker edge to the style.

“So it’s sort of a haunted album. It’s kind of cool that it’s coming out around Halloween, it seems fitting.”

It’s the band’s first real record, though before it played a single show, it recorded a demo tape called Damp Face. Both were recorded with the group’s friend Johnny Goss, who was living in a trailer park on the outskirts of town at the time. Goss, who “accumulated all this really cool old recording gear,” took a leisurely approach to It’s Alive, hanging out with La Luz and working together to add new vocal overdubs or extra fuzz.

Cleveland describes it as a highly collaborative process between Goss and the rest of La Luz — bassist Blackwell, drummer Marian Li Pino, and keyboardist Alice Sandahl — though she wrote the bulk of the lyrics before they started playing together. Once La Luz came together, the group altered the music and included everyone’s input.

But Cleveland is also comfortable making art on her own. In addition to La Luz, she’s also a poet (she actually majored in poetry at Columbia College in Chicago) and a visual artist, known for drawings and paintings of other bands and singers, often with big retro hairstyles or matching vintage suits.

“I found this record in a thrift store once and someone had done like, a ballpoint pen drawing of Buffalo Springfield. It was tucked inside of the record and I was really fascinated by it..and I kind of became obsessed with it. I’ve [always] been kind of obsessed with bands I guess, because my parents were both in bands too so it’s my whole life.”

Her dad plays in country and blues bands, her mom sings and plays blues harmonica. They met on tour, in fact — her dad was traveling with a band and stopped in her mom’s Colorado town, then she joined him on the road.

Cleveland grew up playing the instruments her parents — since divorced — had strewn around the house in Kalamazoo, Mich. She picked up guitar around 15 and began playing Veruca Salt songs.

After college, Cleveland headed west to LA but says she hated living in the San Fernando Valley. One day her mom brought her a copy of Seattle alt-weekly, The Stranger, and on a whim, she decided to move there.

“I packed up my Oldsmobile and moved. I don’t know if [The Stranger] knows that yet! I kind of want to tell them.”

Seattle became home and she has since ingrained herself in the local music scene, ticking off favorite Seattle acts like Rose Windows — “They’re doing this like, ’60s psych Jefferson Airplane kind of thing, they’re all really amazing players” — blues combo Lonesome Shack, and Pony Time.

For now, La Luz is touring on It’s Alive, and revving up for a first ever European jaunt in early 2014. While the songwriting began on a darker note, Cleveland is now seeing brightness in the future, at least when I pry out her band goals: “I really want to tour with Ty Segall. That’s just a dream of mine because I would like to see him play every night. I hope that happens. I really want to play with Shannon and the Clams too, because we’re all huge fans of theirs. And the Growwlers. We just played with them but I think it’d be fun to play more shows with them in the future too. They’re one of our favorite bands.”

With Matthew Caws of Nada Surf and Juliana Hatfield of guest-starring-angel-on-My So-Called Life fame forming an intricate new pop band together — Minor Alps — it’s clear the ’90s resurgence beats on. The guitar-swelling, melodious new act, which just released debut LP Get There (Barsuk), plays the Independent Mon/11. And with it comes openers Churches, whom we previewed here at the Guardian before. The Nirvana-loving Bay Area band just released two new tracks: “Pretty in Black” and “Goths on the Boardwalk.” Says frontperson Caleb Nichols, “‘Goths on the Boardwalk’ is the culmination of my two years of living in Santa Cruz. It’s been weird — goths everywhere. [It’s] an ode to my love-hate with this place.” The angst continues.

Local Nintendo-blasting electro rock group crashfaster released the track “Beacon,” the first single of its forthcoming sophomore LP, Further, this week. Like its earlier work, “Beacon” is a bouncy, nostalgic, digi-ride through ’80s video game culture, backed by motorcycle revving guitarwork and sound effects, in rock’n’roll chiptune style, which looks good for the rest of Further. Recorded at Different Fur Studios, that new full-length sees release Nov. 19 — but before that there’s a show at DNA Lounge. With Bit Shifter, Trash80, Unwoman.