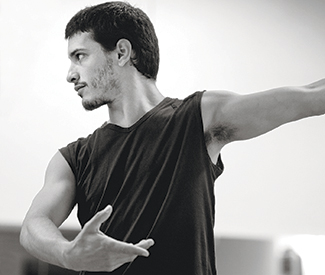 DANCE Israeli-born choreographer Idan Sharabi pays meticulous attention to detail, but serendipity still has a place in his creative process. His Spider on a Mirror receives its world premiere as part of Zhukov Dance Theatre’s sixth season at the SFJAZZ Center this weekend. The work will be paired with Enlight, the latest piece by company artistic director Yuri Zhukov.

Take the way Sharabi chooses his music. For the last couple of years, romantic music — think Chopin — has “often been in the back of my mind when starting a new work,” he explains in a post-rehearsal conversation at the Zhukov studio space on Folsom Street. That’s how late 19th-century Russian maverick Alexander Scriabin popped up for Spider. But then Sharabi went clubbing and happened to encounter Robin Thicke’s “Blurred Lines.” The pop hit had good beat, melodies, and it was fun. “Besides,” he says, “it was all over the place.” So that’s how a Russian wild man met MTV.

Serendipity of a less entertaining kind also kicked in when Sharabi came to work with Zhukov’s dancers. On his first trip to San Francisco, he stayed in Pacific Heights. On his return, living south of Market Street, he got a much grittier vision of the streets of SF. Sharabi drew on this eye-opening experience for Spider. “I am not talking about the difference between rich and poor, but about not having a roof over your head, where people’s skins acquire the gray color of the streets,” he explains.

Trained at Juilliard, where he won the Zaraspe Prize for Best Juilliard Choreographer of 2006, Sharabi has spent his working life in Europe as a freelance choreographer, and as a dancer and choreographer for Nederlands Dans Theater and Israel’s Batsheva Dance Company.

Working on refining Spider — he put the bones together during a four-week residency in June — Sharabi is solicitous of, and aware of, the dancers’ individuality. Yet the process is very detail-oriented. Flailing on the floor, Doug Baum at first looks like a bug fallen on its back. But then trembles and shakes seem to throw him into death throes, tearing his body apart. Sharabi encourages a differently angled knee and fingers that extend into a line. Nick Korkos works on a dropping-wrist gesture that, as the choreographer demonstrates, releases energy to travel up the arm and down the side of the body to pull the dancer to the ground. A limb-entangling duet for Christopher Bordenave and Jeremy Neches finally breaks apart — except, as Sharabi insists, they stay glued together through their big toes.

The exactitude with which Sharabi puts Spider together seems to infuse a sinewy strength into fractured choreography that can look convulsive — sometimes to the point where one becomes conscious of how tenuously these wildly shaking body parts are connected to the skeletal structure.

At the end of the afternoon, the dancers are thoroughly spent. Yet they clearly have what Sharabi always looks for: passion and curiosity. Those are the qualities, he says, that allow superbly trained dancers to go beyond their training and step into unknown territory.

In his own life, Sharabi has encountered and worked with three choreographers who have inspired him to pursue his own path with passion and curiosity. In Jirí Kylián, Czech-born founder of Nederlands Dans Theater, he saw what he calls a “tragic vision.”

“Kylián’s choreography is often quite dark, dealing with death,” he says. “And yet it’s always so elegant. He can take garbage or cans being squashed on the floor, and make them look elegant.” Smiling broadly, he adds, “I am actually a dark person myself,” something he attributes to having suffered a serious injury, and one that may have affected his own perspective on the dancing body. One of the distinguishing marks of his choreography is the extensive and imaginative use of the floor. He views it as more than just something to hit and bounce off; instead, it offers a way to embrace what contact with the earth can offer.

The work of Ohad Naharin, the artistic director of Batsheva Dance Company, remains an intriguing puzzle. With just a touch of embarrassment, Sharabi admits “I still don’t know whether I am supposed to try to understand his work or just go with the sensations.” But about the American-born but Europe-based William Forsythe, who has been rethinking ballet’s fundamental principle, Sharabi is clear: “It’s the math. I love his mind, the clarity of his complex and never compromising thinking.”

What about artists outside dance? Without hesitation Sharabi answers “Quentin Tarantino.” While he is comfortable with Tarantino’s sense of time and even his films’ violence, Sharabi reveres the details (always the details), the sheen, the completeness of the design, the wholeness of the vision, and the absolute control Tarantino exerts over his product. “It’s not the amount of blood that counts,” he says. “It’s the way the blood flows.” *