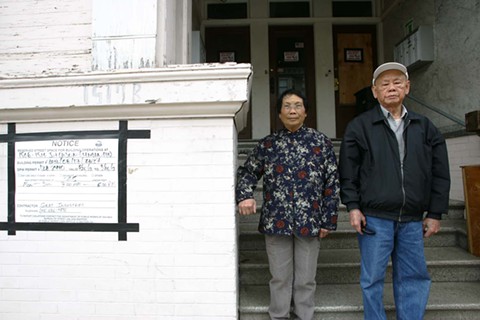 Members of Lee family quietly moved out of their longtime home in Chinatown last night, a day before their latest scheduled Ellis Act eviction, which had been postponed twice before thanks to headline-grabbing progressive activism that turned away deputies and persuaded the Mayor’s Office to intervene with the landlord.

But this time, the Mayor’s Office has been mum about the case (officials haven’t responded to our requests for comment) after failing to find a solution to the Lees – an elderly couple using Social Security to care their disabled 48-year-old daughter – still unresolved situation. With help from the Asian Law Caucus and Chinatown Community Development Center, the Lees moved their belongings into storage while they are staying in a hotel.

“The family is staying at a hotel in the city for the next few days as they try to finalize on a couple of potential rental units here. They’ll be paying over twice the amount that they had been paying for their rent-controlled unit. Their SSI won’t be enough to make ends meet, and so they will be spending down their relocation compensation, which may be depleted in the next several months,” Asian Law Caucus attorney Omar Calimbas told us. “Hopefully, the family will be able to find subsidized housing by then, or they will be in a precarious state of affairs again.”

Sheriff Ross Mirkarimi told us yesterday that he’s been waiting for word from the Mayor’s Office and hoping to avoid this evicting the family. “We’re duty bound. It’s a court order,” Mirkarimi said of his eviction obligation. “The eviction is on the books, but we’ve been expecting an alternative plan by the Mayor’s Office after he intervened in this case.”

The San Francisco Examiner, which had earlier given splashy credit to Mayor Ed Lee for stalling the Lee family’s eviction – to the irritation of some activists that probably deserve more credit than anyone in the Mayor’s Office – had the only journalist on the scene with the Lees last night, but the paper didn’t have any comments or updates from the Mayor’s Office.

Weeks before Mayor’s Lee’s headline-grabbing Sept. 25 intervention in the Lee case, Mirkarimi had his Eviction Assistance Unit contact the Lees and try to help them avoid being turned out with no place to go. But in a city where his office performs around 1,000 evictions per year – it executed 998 court-ordered evictions last year — the single full-time staffer in that office is overwhelmed.

“We need more staff to assist when it gets to this point,” Mirkarimi told us. But his budget request last year to add another position to the unit was denied by the Mayor’s Office and Board of Supervisors, a request that Mirkarimi renewed in a Sept. 30 letter to Mayor Lee.

“When there is a determination, our EAU attempts to support individuals and families facing eviction, not just Ellis Act evictions, but all evictions. This unit is comprised of one full time deputy sheriff and the partial time of another deputy.  Based on [the current eviction] trend, our EAU staffing is insufficient and ill-equipped to assist qualified individuals and families who may be at risk of becoming homeless,” Mirkarimi wrote. “With renewed focus on the consequences of evictions in San Francisco, I return to our FY 2013-2014 budget request to enhance our EAU with one full time clinical outreach worker.”

Meanwhile, the activists say they won’t wait for the next budget cycle or rely on the Sheriff’s Department for help with imminent evictions. They say that they plan to propose a package of reforms for dealing with the eviction crisis as soon as this week.

“Overall, the several weeks of reprieve from the eviction that were won after an incredible display of community solidarity with the Lees were very important in giving them time to find a temporary fix,” Calimbas told us. “Stay tuned in the next day or so for the next move by a growing coalition of community organizations, housing advocates and labor in pushing for a comprehensive package of legislative reform to curb the outbreak of displacement-based speculation.”