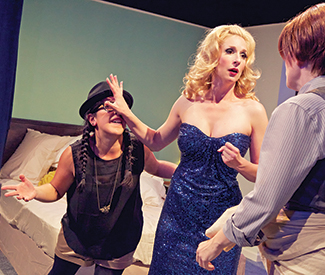 THEATER The premise of Bay Area playwright Lauren Gunderson’s latest, The Taming (not to be confused with her other latest, I and You, running more or less simultaneously at Marin Theatre Company), felt riotously germane on opening night, less than a week into the recent shutdown of the federal government. But only at first.

With a vague nod to Shakespeare’s Taming of the Shrew, this ultimately superficial but consistently witty and rapid-fire political farce takes place in a Washington, DC, hotel room, where a crazed but seriously intelligent, professionally charming Miss America contestant named Katherine, aka Miss Georgia (a superlative Kathryn Zdan), holds hostage two political animals, one liberal and one conservative, while she tries to talk them into helping her bring about a new constitutional convention.

This Southern Liberty Belle is incensed by the status quo and aims at serious reform, seeing nothing short of a new constitution as the way past the political intransigence keeping America from living up to the vision of its Founding Fathers — especially the Constitution’s principal author, James Madison — as she understands it. And she’s willing to go to extreme lengths to see it happen, including drugging her captives and, worse, hiding their cellphones.

Initially, of course, her hostages will have none of it. They immediately wage a rapid-fire quip-war in which the usual stereotypes become so many grenades lobbed at either side of the room and the political aisle.

Bianca (Marilet Martinez) is a liberal blogger in braids, leggings, and hipster hat whose hatred of Republicans is matched by her passionate commitment to the salvation of a tiny, endangered mammal known as the North American Great Pygmy Panda Shrew — a veritable dog pile of qualifiers half-burying the allusion there to Shakespeare’s “taming” play.

Her Republican counterpart, Patricia (Marilee Talkington), is aid and brain to a powerful far-right senator from the South, predictably dim-witted and obsessively predatory on his nubile young interns. Her problems are initially geared to managing her loose cannon of a boss. “What if he actually says what he means? What if CNN asks him to spell something?” But soon we discover that Patricia’s passion lies in the legislation she has devoted her professional life to seeing come to life. It’s actually a jobs bill, in her fashioning, thus pitting ordinary American workers against Bianca’s furry charges in the political melee. Interestingly, the Republican character comes across as the more reasonable of the two.

In artistic director Marissa Wolf’s sharply choreographed production for Crowded Fire (which produced Gunderson’s other Shakespeare-sprinkled contemporary comedy, Exit, Pursued by a Bear, in 2011), the play’s giddy speed also serves it well. While all three performances are strong, Zdan’s tiara-wearing revolutionary, with a fine Southern drawl and a wonderfully composed, perfectly modulated delivery, holds center stage from the first moment we see her — during an exuberant sound check on the pageant stage. Meanwhile, Talkington succeeds best at humanizing her own zany character, infusing her conflicted Republican operative with the hint of melancholic depths that makes her more interesting than the comparatively one-note liberal played by Martinez with punch but less subtlety (which is maybe inevitable given the character’s heavier burden of strained stereotype).

If the play’s timeliness also adds to its enjoyment, the initial frisson of righteous laughter at the expense of politics as usual ends up short-lived. The spectrum of possibilities represented here, political and otherwise, is just too narrow to allow real distance on the hopeless, hideous spectacle of Washington corruption. So resolutely does The Taming stay in the world of red-state, blue-state clichés that the play unintentionally reproduces that sense of hopelessness, in which the world at large comes bounded solely by Democrats and Republicans — a narrow spectrum of humanity that makes one identify more readily with that doomed shrew. *