Home The NSA made the most boring and controversial Tumblr in the United...
WriterJoe Fitzgerald Rodriguez
SectionPolitics Blog 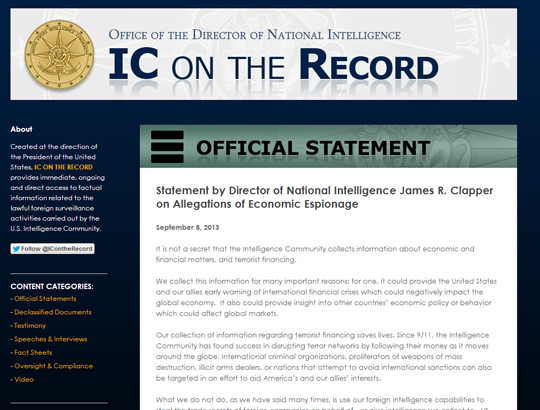 Here’s an excerpt from their Tumblr blog addressing their bad press:

“While the specifics of how our intelligence agencies carry out this cryptanalytic mission have been kept secret, the fact that NSA’s mission includes deciphering enciphered communications is not a secret, and is not news. Indeed, NSA’s public website states that its mission includes leading ‘the U.S. Government in cryptology … in order to gain a decision advantage for the Nation and our allies.'”

Well of course it’s not news that the NSA spies on folks, that’s their purpose. But when the federal government can read the emails and digital records of ordinary citizens without so much as a constitutional please-and-thank you, something is definitely wrong. And thanks to a bombshell dropped by The UK Guardian, the New York Times and Pro Publica partnering to release Edward Snowden’s newest leak, we now know that the NSA can decrypt just about anything on the internet.

And sometimes the NSA uses it to spy on their love interests.

Luckily, there are folks who are on this. The Electronic Frontier Foundation just achieved a major victory by suing the government under the Freedom of Information Act, known as FOIA, to get their hands on documents related to the government’s secret interpretation of Section 215 of the Patriot Act, the law the NSA has used to justify searching through the digital lives of Americans.

You can read more about their victory here.

The EFF is based in San Francisco, which of course means that there is a video of them at Comic-Con.

And the EFF even outlined ways citizens can help:

“Faced with so much bad news, it’s easy to give in to privacy nihilism and despair. After all, if the NSA has found ways to decrypt a significant portion of encrypted online communications, why should we bother using encryption at all? But this massive disruption of communications infrastructure need not be tolerated. Here are some of the steps you can take to fight back:

The NSA is attacking our secure communications on many fronts and we must oppose them using every method we have at our disposal. Engineers, policy makers, and netizens all have key roles to play in standing up to the unchecked surveillance state. The more we learn about the extent of the NSA’s abuses, the more important it is for us to take steps to take back our privacy. Don’t let the NSA’s attack on secure communications be the end game. Let it be a call to arms.”

Get educated, and bone up on the most recent news on the NSA’s spying tactics and policies:

And until everything gets better, I’m going to keep using Tumblr the way it was intended: reblogging GIFs of the best Doctor, David Tennant.