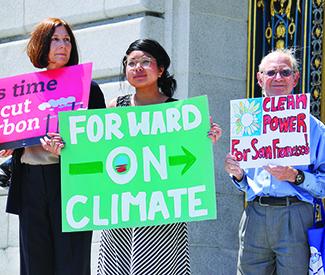 Mayor Ed Lee will be on the hot seat for his unqualified support of Pacific Gas & Electric Co. and his related opposition to the CleanPowerSF renewable energy program, which his appointees to the San Francisco Public Utilities Commission are trying to sabotage, when he shows up for the monthly mayoral question time at the Board of Supervisors meeting on Tuesday.

Hopefully the boring, scripted question time format that Lee created in collaboration with Board President David Chiu will finally give way to what the voters intended when they required the mayor to engage with the legislative branch: an actual, substantive, back-and-forth policy discussion meant to illuminate issues of public concern.

Because that’s what’s needed on this important issue. After more than a decade in the making, the board last year cast a historic vote to create the project on a veto-proof 8-3 vote. But the SFPUC is now refusing to set the maximum rate for the program, which should be a fairly technical and pro forma action, instead raising unrelated issues that the supervisors have already considered. In other words, unelected mayoral appointees have decided to veto a hard-won democratic gain, creating something akin to a constitutional crisis in a city that values public process and input.

So for the first time ever, all the of the supervisors scheduled to ask questions (it rotates because odd- and even-numbered districts each month) have focused various aspects of a single important issue. Even though Lee has mastered the politicians’ dark art of speaking without saying anything, this one should still be a doozy as supervisors ask the following questions:

1. Mayor Lee – As you know, San Francisco has set ambitious goals to combat climate change. In many ways, the City is making great strides in this direction, from increasing bicycling, to pursuing zero waste goals, to hiring a new, excellent environmental policy advisor in Rodger Kim who has a strong background in environmental justice and community engagement. However, the Public Utilities Commission has repeatedly failed to set rates for CleanPowerSF, the most impactful local proposal yet designed to curb carbon emission. This program was adopted by the Board of Supervisors, the legislative body of the City. However, there are some allegations that your office is stalling its implementation. What specifically are you doing, as the City’s head executive, to implement this policy in a timely fashion? (Supervisor Mar, District 1)

2. Mr. Mayor, can you please outline your objections to the CleanPowerSF program as approved last year on an vote 8-3 by the Board of Supervisors? (Supervisor Chiu, District 3)

3. Recognizing the constraints imposed by state law, particularly with respect to opt-out provisions, how would a clean power program need to be structured in order for you to support it? Are you willing to work with the Board of Supervisors, and have your staff and commissioners work with the Board of Supervisors, to revise CleanPowerSF so that you can support it? Can we come to the table and make clean power a reality without any further delay? (Supervisor Breed, District 5)

5. Days after the one-year anniversary of the 2010 PG&E San Bruno pipeline explosion, you called PG&E a “great local corporation” and a “great company that gets it.” However, the examples of PG&E’s immoral, illegal, and greedy behavior are legion:

– PG&E avoided admitting fault in the San Bruno explosion, failed to cooperate with the investigation, fought against paying a fair fine, and hopes to make ratepayers pay for the fine.

– Outages of PG&E-owned streetlights have increased over 400% in recent years, and PG&E wants to increase by $600,000 a year the amount it charges the City for streetlight maintenance without committing to improved service.

– Despite the fact that PG&E already has some of the highest electric rates in the country, PG&E is seeking to further increase rates in each of the next three years.

– While PG&E has proposed a new Green Tariff program, it remains only a vague proposal and there is no guarantee that it will ever be implemented.

– PG&E’s previous green campaigns-such as ClimateSmart and “Let’s Green This City”-have proven to be short lived and ineffective public relations stunts. Multiple public surveys conducted by the PUC to gauge the level of support for CleanPowerSF have all found that a substantial number of San Franciscans want the opportunity to pay a slight premium for a 100% renewable alternative to PG&E.

Why does your office continue to oppose providing City ratepayers with an alternative to PG&E’s monopoly by implementing CleanPowerSF? (Supervisor Avalos, District 11)