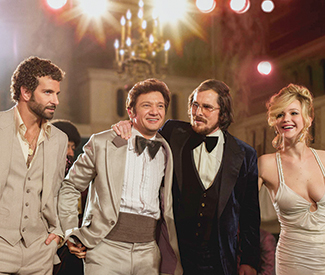 FALL ARTS In the Bay Area film scene, the volume is pretty much turned all the way up, all year ’round. But fall is particularly jam-packed: we’ve got more festivals and art-house events than we know what to do with — and coupled with the buzzy Hollywood stuff, film fans best prep for a solid diet of popcorn until New Year’s Eve. Or you could pick and choose the events and openings that excite you the most, using my multi-point plan as a jumping-off point.

Nebraska (Nov. 22) Two years after The Descendants, Alexander Payne returns with another sad-dad tale, but seriously, nobody does it better. Here, the troubled patriarch — a man rambling from Montana to Nebraska with his son (Will Forte) in search of sweepstakes winnings — is played by Bruce Dern, who won Best Actor at Cannes and is a likely Oscar nominee.

The Monuments Men (Dec. 18) He’s got his Best Picture Oscar (for producing 2012’s Argo); now George Clooney returns to the director’s chair to guide a gold-star ensemble (Matt Damon, Cate Blanchett) through this thriller about art curators rushing to preserve Nazi-nabbed artworks. (And yep, someone on IMDb.com’s message board has already dubbed it “Inglourious Basterds meets Ocean’s 11.”)

Anchorman 2: The Legend Continues (Dec. 20) Appropriately enough, in a season stuffed with dude-heavy stories, the ultimate manly man returns. What have Ron Burgundy (Will Ferrell) and his San Diego news posse (Steve Carell, Paul Rudd, etc.) been up to for the past nine years? The ubiquitous Kristen Wiig joins a cast that also lists several huge names (Harrison Ford?) who probably fill cameo roles. (Confidential to Ferrell: will we ever see Step Brothers 2? Asking for a friend.)

New Parkway (www.thenewparkway.com) In addition to its second-run programming (Man of Steel goes down easier with tasty pizza), Oakland’s speakeasy continues its theme nights, including the “Thrillville Theater” cult showcase, and the free “First Friday Shorts. Sept. 6’s event features short films by and about transmen of color.

The Castro (www.castrotheatre.com), the Roxie (www.roxie.com), and Berkeley’s Pacific Film Archive (bampfa.berkeley.edu) share hosting duties on a Pier Paolo Pasolini retrospective that includes 1975’s oft-banned Salò, Or the 120 Days of Sodom. Also at the Castro, look for tributes to the late Karen Black (Sept. 18) as well as a restored print of 1973’s The Wicker Man (Oct. 4-5). Anticipated fall-calendar bookings at the Roxie include acclaimed DC sniper drama Blue Caprice (Sept. 20), and shot-on-the-sly-at-Disneyland saga Escape From Tomorrow (Oct. 11).

At the Yerba Buena Center for the Arts (www.ybca.org), September brings “Local Boy Makes Good: New Bay Area Film” as well as “Back In the Day: New Films on Hip-Hop and Urban Subculture.” Later in the season, look for “Age Limit May Vary in Certain Areas: A History of X-Rated Film” (Nov.-Dec.), and a Rainer Werner Fassbinder series (Oct.-Dec.) that’ll also play at the Roxie and the PFA.

Speaking of the PFA, catnip for film fans awaits with “Dark Matters: The Films of William Friedkin” (Sept. 12-21), who proved he hasn’t lost his touch with 2011’s Killer Joe. Head-spinning bonus: the man behind 1971’s The French Connection and 1973’s The Exorcist makes an in-person visit Sept. 21, between screenings of Joe and 1980’s Cruising.

Experimental junkies will want to check the San Francisco Cinematheque (www.sfcinematheque.org) and Other Cinema (www.othercinema.com) pages for seasonal updates, while midnight-movie fiends can rely on Midnites for Maniacs (www.midnitesformaniacs.com; next show is a “Back to Skool” theme, Sept. 20 at the Castro) and Midnight Movies at the Clay (www.landmarktheatres.com), which dares to dunk 1996’s Space Jam (Sept. 20-21) onto its calendar.

Pencil in Oct. 2-3 for the Exploratorium (www.exploratorium.edu) premiere of Sam Green’s new cinematic event, Fog City, with live music composed for the film by New York band the Quavers.

If none of those festivals tick your boxes, head to the San Francisco Film Society‘s calendar (www.sffs.org) to parse its meaty schedule, kicking off with programs devoted to Egyptian filmmaker-in-residence Mohamed Diab (Oct. 1-15). Then, throughout the fall, SFFS presents films from Hong Kong, Zurich, Taiwan, France, Italy, and right here in the Bay Area. *