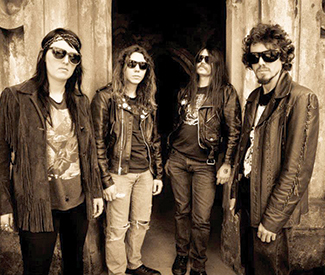 MUSIC If you’ve been to a local metal show in recent months, chances are Ovvl was on the bill. If not, there was probably an Ovvl member standing next to you in the crowd. But hesher, stop now if you’ve been taking ’em for granted. With a new album and tours on the horizon, the four-piece is about to be mighty scarce around these parts.

For anyone echoing the band’s namesake and asking “Who?”, the first thing you need to know about Ovvl is that three-quarters of the band are related. Brothers Axell Baechle (at 18, he’s the youngest member by a decade; he plays guitar and sings), guitarist-vocalist K. Baechle, and drummer Clint Baechle were destined to play music together, though the band was only complete when bassist Melanie Burkett came aboard. Ahead of a busy day of filming its first video, then playing a show after, Ovvl paused to reflect on family bonding, Rush album art, and the action-packed months ahead.

Axell Baechle [K.] and I started playing music together when I was, like, 12, but it never really amounted to anything. A few years later, Clint had more time because he wasn’t playing in eight bands anymore.

Clint Baechle We were all at our parents’ house one Christmas. They had the songs written, so we recorded the original demo tape and released it. Lo and behold, people liked it. That lead to us getting the band together for real. Melanie saw us play our first show, when we didn’t even have a bass player.

Melanie Burkett I believe Axell was simultaneously smoking a joint and playing riffs in his boxers on top of a Marshall stack. And I was like, “Hey Clint, I want to be in your band, man.” I kept bugging him, until one day he was like, “We’re playing shows next month! Learn the songs! Let’s go!”

CB And there was no turning back.

SFBG How does being related affect the dynamic?

CB For us, it’s great. I’ve been playing music with [K.] since we were very young children. Axell came along musically after I’d moved out of our parents’ house, so we developed a musical relationship later. But what we have now is almost what you might call a telepathy. We finish each other’s riffs, finish each other’s sentences.

AB Actually, just mostly that. There’s not really anything else.

MB After we had done a couple of tours, the boys started treating me like their sister. Growing up with two brothers, it was an easy role for me. Although we’re not blood related, we still argue like we are. [Laughs.]

SFBG Is the new album similar to your previous releases [including 2012’s self-released Owl]?

CB More complex. A little less swords-and-sorcery. We’ve been recording it over the past year with Kurt Schlegel at Lucky Cat Studios. Kurt does a lot of live sound [recording], so we have a really live-sounding record. The mixing is almost done and it sounds great — it should be out before the end of the year.

SFBG What’s the story behind the name?

AB I think it came from continuous viewing of the second Rush album cover.

CB [Agreeing.] Rush is the band that made owls badass for heavy metal. [As for the spelling,] we got a cease-and-desist order from an LA band called Owl, which was annoying to say the least. But we’ve been gradually phasing in an alternate spelling of our name, and we haven’t heard anything from that lawyer since then.

SFBG Where’s the tour going to take you?

MB Through the western United States for three weeks. Plus, Tijuana — it’s our first time in Mexico. But we’re really focused on going to Europe, which is slated to be a six-week tour. I think it will be a changing point in our career, getting a lot of new people into our music.

CB We self-released our first album, and I think we shipped more records to Europe than the US. We’re looking forward to playing for all these people who’ve been supporting us.

SFBG Do you have a preference between house shows and shows at established venues? [Visit www.owlbrotherhood.net for info on house shows, including a Fri/23 Oakland gig.]

KB My favorite is Bender’s — the best crowd.

CB In my opinion, nothing beats a great house show, though. Playing in somebody’s living room or basement. I’ll never get sick of it.

SFBG How does Ovvl fit into the Bay Area metal scene?

MB We fit into a few different genres. We’ve played shows with psychedelic, metal, punk, and rock bands, and those elements are within almost every Ovvl song. Most recently we played with Slough Feg, which was awesome — I think that was pretty much right on as far as matching genres go.

CB I think that the Bay Area has always had one of the best metal scenes in the world, and it’s cool just to be a part of it, even if it’s a small part. It’s a fun scene to be in, because there are cool bands and the people here are really into metal and they’re really into music.

SFBG Is there an Ovvl band philosophy?

CB Have a good time, all the time [laughs]. If it’s anything, it’s just ‘Do what we feel like doing.’ We play retro stoner metal right now, but if we felt like turning the band into a hip-hop crew, we would do that too. It’s not about doing a certain style — it’s about doing what’s fun for us and what we enjoy most. *