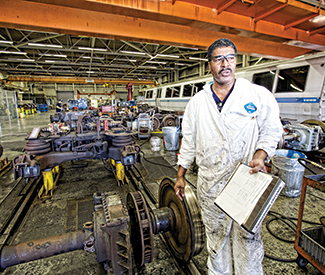 BART’s trains will keep running, for now, after a San Francisco Superior Court judge ordered the 60-day cooling-off period that Gov. Jerry Brown was angling for last week to address BART’s labor contract impasse. The injunction is in effect until Oct. 10, blocking any strike or lockout until then.

A report by the Bay Area Council said that the four-day strike in early July cost the Bay Area $73 million a day. That estimate was also a conservative one, according to a report put together by a special investigative board convened by Brown to look into the brinkmanship between BART workers and management.

“All parties agree that the major issues of the negotiations remain unresolved, including wages, health benefits, pensions contributions, and workplace safety,” the Aug. 8 report said.

Aside from the nitty gritty of the contracts, the two parties can’t even agree on math. The report found that the “parties do not agree on the magnitude of the gap in their respective economic proposals,” and that they are between $56 and $62 million apart on their forecasts of district finances for the next three years.

But the unions say that BART is financially healthy and can offer a decent contract to workers. Out of a budget of $1.5 billion, union officials say payroll for their members totals about $200 million.

The unions and management will now have two months to cool off. But will that help along their negotiations? SEIU Local 1021, which represents engineers and custodial workers, doesn’t seem to think so.

“We have bargained unsuccessfully with this employer from May 13 to June 30, 2013 with no true indication from the district that it intended to reach an agreement,” the unions wrote in a letter to the investigative board. “We have no reason to believe that if a 60 day cooling off period were created, we would not be standing then on the precipice of another work stoppage without an agreement.”

Meanwhile, to put a human face on a labor standoff that has provoked sometimes nasty reactions from the public, we ran a couple profiles of BART workers on the SFBG.com Politics blog last week. The response was so passionate and overwhelming, we decided to run them in the paper as well:

First we met Robert Earl Bright, a 47-year-old transit vehicle mechanic at the Hayward yards, where he’s been for three years. BART trains seem tame compared to the machines he used to work with, starting out as an Air Force mechanic working on cargo planes.

It’s that experience he draws from when he said BART’s policies are becoming increasingly dangerous.

Bright is tall but soft-spoken, and while we sat at a bench in a courtyard at Lake Merritt BART station, he talked about the shortcuts BART has taken lately, and how overtime and consolidation are bad practices for everyone involved.

There used to be specific workers called Power & Way controllers who looked out for workers on the train tracks and made sure they were safe, he said, but those responsibilities were consolidated into a separate train controller position. Since then, Bright saw the death of a colleague, a mechanic who switched from a graveyard shift to a day shift and was hit by an oncoming train.

Only after the death did BART take steps to ensure parts of the track where there was less clearance safe from trains were marked, he said.

“The problem is BART seems to wait until someone gets killed until they want to do something about it,” he said.

Bright is a new grandfather. He helps support his daughter and her two toddlers, and he supports his older brother who suffers from dementia. Bright has a home that his fiancée bought, but is “upside-down,” as he says, because of a predatory loan.

He’s one of the lucky ones though, as the military pays for his health care, and the negotiations don’t impact him as far as that goes. But he does worry about his pension, and thinks he may have to cut back on supporting his elderly brother and his grandchildren. Even with those cutbacks in his life, he’ll likely have to look for a part-time job as a car mechanic, he said.

While contemplating that future, his four-hour daily commute, and the new expectations BART asked of his crew to repair more cars in less time, he started to develop an ulcer.

“They’re short on people, and it’s cheaper for the managers to pay for overtime than to pay for another person,” he said. The stress pressed on him and one day at work he grew dizzy and collapsed. That’s when he started to be a little more Zen about what BART asked of him. But he still said it’s not right.

“Our shop is a mod [modification] shop, but we got tasked with doing preventive maintenance. Our shop isn’t set up for that,” he said. And that means workers who aren’t trained for that particular job are pushed to fix up cars when normally they’re doing an entirely different job. That can be dangerous, he said.

As far as Bright goes, he said he’s seeing more people working overtime at the request of managers, working longer hours that could lead to unsafe conditions — not just for the mechanics, but for the people who ride BART every day.

“Wherever they need me, that’s what I do,” she said.

Alexander often starts her days cleaning the elevators and escalators at Powell Street Station, and if you’ve been reading the news lately, you know what that means.

She doesn’t mince words about it: “I clean the urine and the feces out of the elevators and make sure it’s clean and smelling good for the patrons.”

But Alexander doesn’t hold it against the homeless. When she first started at BART, she had little contact with them. But over the years, she’s made good friends out of some of the homeless at Powell and 16th Street stations, and the latter is where she sat and told her story.

“As the years passed, it got worse. People living in their cars on the streets, in their doorways. I’ve met a lot of wonderful homeless people, wonderful people,” she said. And as the years went by, it got harder for the cleaning crew, too. She’s one of two systems service folk who take care of Powell Street Station at any one time.

“Sometimes it can be tough, it can get hectic, but we get it done. It’s hecka huge, and there’s only two of us, but we have to do the best we can do.”

But she keeps with it for herself and her daughter.

Her daughter just finished medical school and is still living with her. Alexander makes about $52,000 a year, she said, and couldn’t figure out major cuts she’d make in her lifestyle to make room for paying more into her pension or health care.

“It would hurt me,” she said. She said that though people in the Bay Area demonize BART workers for wanting a raise, she feels it’s simply been too long since they’ve had one.

“I think I haven’t gotten a raise in two contracts. It’s been like seven or eight years,” she said.

Devoutly religious, ultimately she keeps faith that the workers will prevail in negotiations.

“(God) is going to bring this through,” she said. “This thing with management, it’s going to be all right.”

For the Record: Clearing up misinformation about BART workers

BART workers pay only $92 a month into their health care. Right? Wrong. “That doesn’t tell the full story,” said Vincent Harrington, a lawyer representing the unions at the negotiating table. “These workers contributed 1.627 percent of their wages into a fund to cover not only the ongoing health care of active employees, but also the retirees.”

That brings the total to about $180 per person, he said, with a caveat. Some time ago, employer-provided health care was capped. “Additional (healthcare) costs beyond that cap would be on the workers and their families, not on BART,” he said.

It’s true that BART workers don’t contribute to their pensions, but the entity responsible for that is BART management. In 1980, BART made the proposal to pay employee contributions to pensions in exchange for wage concessions from BART workers. The unions recently proposed to contribute 7 percent of their pension benefits, with wage increases of 6.5 percent to offset that. BART management said they’d agree, if the wage increase was lowered to 0.5 percent instead.

A database constructed by the San Jose Mercury News lists a BART employee’s full cost to the taxpayer — often at around $100,000. This is their “cost” to BART, not the wages they take home, a common mistake regularly made by angry online commenters. All employees everywhere, private or public sector, have a cost to their employer past their base salary.

According to Intuit.com, a web resource for small businesses, business owners should consider that each employee they hire will cost twice the amount of their wages. This is normal stuff, people. It’s wrong, and not factually significant, to demonize BART workers for costing more than their salaries.

BART employees have also been villainized for working overtime. But these employees don’t necessarily want to work overtime at all, and often do it at the urging of managers who have slashed so many workers in the past decade that the only way the trains will run is if everyone puts in extra work. A worker at the Aug. 7 BART hearing said, “I go to work before my daughter wakes up, and I’m home from work when my daughter goes to sleep.”

Some mechanics we talked to said that working overtime can also lead to more injuries, and a higher possibility of mistakes that could cost riders their lives.

Since 2010, 1,099 BART customers reported being physically attacked, and so were 99 BART employees. Those station agents often work alone at night and just before dawn, the only staff in the entire station. They want extra staffing to help meet OSHA recommendations that employees work in pairs. They also want better worker’s compensation coverage. Saul Almanza, a BART representative from SEIU Local 1021 and a 17-year railroader, said “The area where [BART mechanic] Mr. [Robert] Rhodes was killed was very dark, and remains that way today. Look at the picture to the left, and that’s where Mr. Rhodes was standing as the southbound train proceeded through the interlock. It was dark and loud, and that’s where he was struck as he stood there with no place to go.”

One of the underreported asks at the bargaining table is unlocked bathrooms. Since the terrorist attacks of 9/11/01, many of the bathrooms at most BART’s stations have been locked. This prevents customers and workers alike from doing as nature intended. It’s a matter of respect and dignity to be able to do use a bathroom while at your workplace, said one BART worker, Jon Kozlosky, at the hearing. THE TRAINS DRIVE THEMSELVES One of the accusations we see on our comment board with every article is that since the trains drive themselves, the workers must have little expertise. But the drivers still carry out many functions of the trains. Besides, most BART workers toil behind the scenes: 920 of BART workers are drivers and station agents, but about 1,450 employees are in mechanical maintenance, clerical, and other jobs (like sanitation).