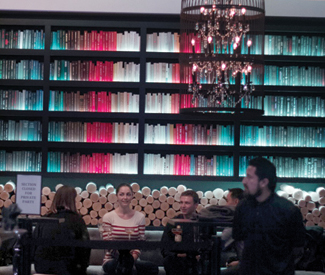 But my friend and I just somehow felt out of place.

Perhaps this was a case of misplaced expectations: this wasn’t the bar atmosphere I envisioned at all. With dance music (“Is this MGMT?” my friend asked as we sat down) blaring at around 7pm on a Tuesday, and an all-female service staff dressed in tight black clothing with gold jewelry accents and very high heels, it’s fair to say this place lacked the unshowy intimacy I associate with reading.

Despite our unease in the party environment, we decided to stay and give the libations a try. Novela has several “Cocktails with Character” on its menu, named for famous literary figures (duh). But it prides itself in its punches — six on tap, all made with fresh seasonal ingredients. Since the cognac punch was unavailable, I settled for a glass of the “Tequilla” (as spelled on the menu) punch while my friend, Michelle, tasted the gin one. Both weren’t anything to write home about. Tequilla was just not my cup of tea — the tequila, mezcal, hibiscus, grapefruit, and lime failed to gel — while I don’t remember much about the gin punch. Maybe it had too much rhubarb. Michelle and I pondered the thought of a book-themed bar having a typo on the menu, however deliberate, and realized that it perfectly encapsulated our thoughts of the place so far.

Once the after-work crowd poured out, we settled into some reading chairs near the back of the bar and ordered more drinks. This is when we found ourselves in the middle of a light show — the lights behind the book-filled walls started flashing, as did those along glass and metal liquor shelves. Disco time!

And with that, I suddenly felt like Novela was the one out of place. I can appreciate wanting to expand the notion of the “library bar,” of which our city has many examples, from the library at Bourbon and Branch to Two Sisters in Hayes Valley. But with Novela, I just plain could not see the purpose. San Francisco is a city rich with culture and character, and none of that is reflected here. It felt artificial: all flash and no substance, right down to the cocktail menu (every high school sophomore knows a drink named after Jay Gatsby should be based on gin, not bourbon) and the forced sorority-esque look of the staff.

Back to the drinks: Michelle ordered the Atticus Finch with bourbon, earl grey honey, and bitters — she originally ordered the pisco-based Sherlock Holmes but the birch beer was too overwhelming — while I ordered that Jay Gatsby, with bourbon, scotch, amaretto, calisaya, and nocino. They were both nice but, again, didn’t quite make the grade. In the end, Michelle and I walked out into the night with more questions than answers — a mark of great literature, perhaps, but not of great bars.