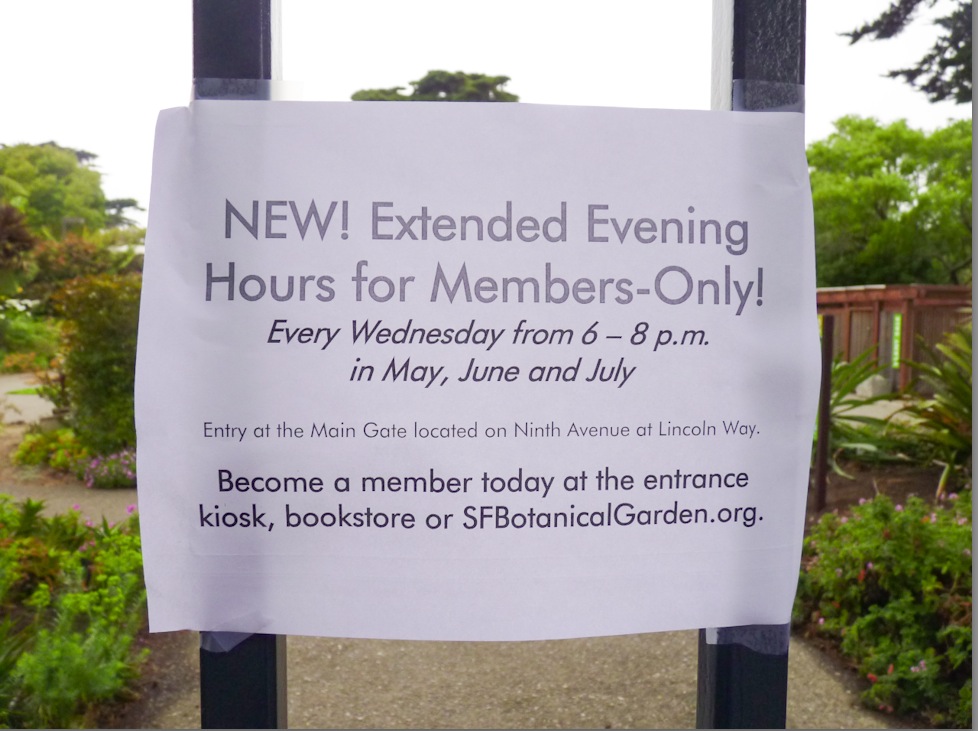 GUARDIAN OP-ED Riddle me this: When is a public space a private space? Answer: When it is controlled by a “nonprofit” in a “public-private partnership.”

For more than two decades, the San Francisco Botanical Garden Society attempted to obtain entry fees to Strybing Arboretum. It first changed its name from the Strybing Arboretum Society, then hired a lobbyist to push through changes to the name of the Arboretum itself, reasoning that the new name was more commercial.

When, in 2009, it found that it could not find support for fees for everyone, it chose to hire lobbyist Sam Lauter, at a cost of hundreds of thousands of dollars, to push through a $7 “nonresident” fee for a one-year “trial”. Gates were closed; entrance hours were extended; and people (many of them residents, yet undocumented) turned away in droves.

Despite this fact, and counter to the recommendations of Harvey Rose and Associates, the fees (which include steep rate rises for rentals at the Hall of Flowers) were extended for a year.

The ruse of “revenues” notwithstanding, the fees are really a tax on working people, one designed to keep people out. As any visitor on a sunny day can attest, it has acheived dramatic events: The gardens are empty! Members of the San Francisco Botanical Garden Society, however, enter for free and benefit from the tax dollars of Californians, many of whom must pay for entry. Mysteriously, the Society received a $725,000 grant in 2012 and one for $400,000 in 2011.

This July 20th, the Recreation and Park Department will present its budget with a Trojan Horse hidden in it — a contract which will effectively privatize these precious 55 acres for perpetuity, making all of us all second-class citizens in our own City.

Philip A. Ginsburg, manager of the Recreation and Park Department, negotiated this contract behind closed doors. We taxpayers wil be on the hook for paying electricity at their new building, a sprawling walled complex covering two football fields which will require a new road, fell some 50 trees and will endanger the habitat of Mark Twain’s frog. The fact that this building — to be used for parties, a store and offices — will be called a “Center For Sustainable Gardening” makes me feel that we have entered an era in which irony can no longer outdo reality.

Is a vision of a future filled with food trucks, ritzy private events and complete control over public space (by a small number of wealthy people with no accountability to the public), what Helene Strybing had in mind? Will a Supervisor not have the courage to step forward and demand that this set of legislation be considered on its own?

If we fail to act one thing is certain: In the coming years we will find an increasingly commercialized with an entrance charge in the double digits for all and sundry.