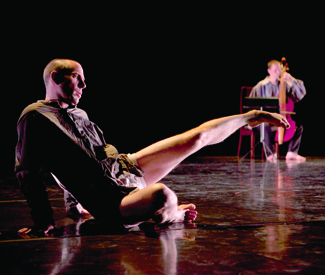 DANCE Christy Funsch’s latest program, State: not anywhere near to now (May 31-June 2, CounterPULSE), represents what we have come to expect from her work: it is full of surprises, as comfortable as one’s own skin, and both immensely private and ever so open. It also keeps some of its secrets. Funsch’s primary output has been in solos, a genre she enters into with the utmost confidence. Her dance making is nuanced, rich in detail, and impeccably crafted. For all their quietness, her pieces resonate like finely tuned bells.

Last year’s illuminating and entertaining One on One at Z Space, in which Funsch set a number of her solos on other dancers, served as a reminder of just how bursting with possibilities the genre is. Yet there is no place to hide. The dancer and the dance are always on the spot.

Sharing this year’s concert with Funsch was Portland, Ore.-based Katherine Longstreth, clearly a kindred spirit in creating small-scaled works that are anything but modest.

The program opened with two of Longstreth’s own solos, O What, danced by Funsch, and O Where, performed by the choreographer. Highly condensed, they propose one vision but quickly turn it inside out. O What’s collage of Americana songs called up easy corn-fed living while Funsch explored the dark stage with a flashlight. Walking, stretching her arms, rolling through the torso, and rocking to the beat, Funsch seemed to relish entering the world of Oklahoma! But in the end, she stretched herself onto a narrow strip of Astroturf, her head stuck in what looked like a huge cloud of cotton candy.

With echoes of “Over the Rainbow“ overlapping with “Home on the Range,” O Where pierced the concept of the Americana home. Dressed in black with a white blanket that turned into a shawl, a hood, and body covering, Longstreth carefully traced regular linear patterns. Rolling on the floor, she opened her blanket into wings and eventually an elegant white frock coat. Then very quickly, she discarded it to carefully fold it — like a military flag.

Nol Simonse reprised Funsch’s fine 2012 Kneel Before the Fire. He is an articulate, highly expressive dancer always good to watch, though I couldn’t help but wonder if he took a lot of liberties with Funsch’s choreography. Performed to Alex Keitel’s viola da gamba, Simonse embraced a free-spirited approach to the music that ended when he threw himself at Keitel’s feet. A gesture of thanks, well deserved.

The beautifully economic Narrative Medicine, choreographed by Longstreth and performed by her and Kelly Bartnik, traced what was a perhaps a friendship imperiled of illness. Casually rolling big wooden spools that became chairs and a table, the women tenderly examined each other’s hands. Then Longstreth moved to what looked like a medical screen to return to her partner, now stretched out on the table. Bartnik now fiercely resisted an examination. A lovely touch was the screen’s unraveling, ensnaring Bartnik in the process. Yet Longstreth held onto her.

Funsch’s newest solo, Moving Still(s), was apparently inspired by Fritz Lang’s 1931 film M, from which she borrowed 15 characters. It’s been too long since I’ve seen that movie to discern any echoes; however, Keitel’s suggestive sound collage proposed a world through which Funsch moved, at times searchingly, at times perhaps threatened by it. Above all she seemed to have her antennas out all the time, examining space close up but also peering into nowhere.

When the fingers of one hand began to tremble, it began to look like a conversation within her body. Grabbing her leg, she wanted to control a limp that careened her downstage. When the music switched into a jazz mode, she rollicked along with it. Opening and closing Moving were Funsch’s arms angled against her head. Their motion suggested that of the shutters on a lens. If Moving returns, I’ll revisit M beforehand.

At this point, the final work, she’s near she’s now she’s nowhere (which was announced as “in-progress”) is a loosely constructed trio for Celine Alwyn-Parker, Aura Fischbeck, and Peiling Kao. How and if its robust physicality eventually will be tamed and shaped will be the challenge. Tamara Alburtis’s sound sculpture of tiny speakers looked promising, but remained silent for much of the duration.