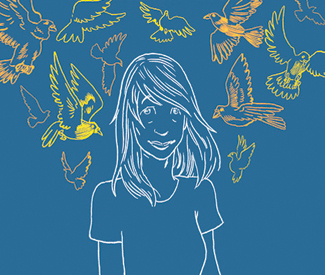 LIT Even humankind’s saviors need a little help from their friends to max out on destiny. In local writerperson Michelle Tea’s world, that support has been culled from the closely-knit community of queers, feminists, and outspoken loud mouths that make up the extended family of the Sister Spit and Radar reading series that she assembled in the open mic wilderness of early 1990s and 2000s San Francisco.

Bully for her, but we can’t all chart such exceptional trajectories. Thanks goddess, then, that in Tea’s second young adult novel Mermaid in Chelsea Creek, help comes to 13-year-old Sophie Swankowski from a more likely cast of characters: a flock of well-spoken activist pigeons, a spell-weaving corner store zhakharka, her grandmother’s hot genderqueer garbage dump assistant, and an absolutely filthy mermaid who assures Swankowksi that despite the six-pack plastic rings stuck in her hair, she is big in Poland.

“It’s sort of a bad world,” the put-upon Swankowski is told by Syrena the mermaid. “I come here to help you fix it.” The declaration arrives while Sophie is playing the “pass-out game” (you KNOW) with her obsessive, set-upon-by-hormones best friend Ella at the polluted creek near their depressing homes. The scene takes place at the start of summertime in Chelsea, where “there isn’t any right side of the tracks,” as our protagonist puts it.

What follows is not the story of Swankowski’s world rescue, but a different struggle entirely: the young woman’s realization that she need not hold to the boundaries erected around her by family and childhood friends. She is, as Angel the dump worker-curandera’s daughter puts it, one of the “girls who knew things and had powers and a certain destiny.”

I refuse to consider this a spoiler because the excellent Mermaid of Chelsea Creek, the first book published under McSweeney’s new young adult imprint McMullens, is but the first in an upcoming trilogy involving Sophie and her motley crew. Believe me, there is a lot in the book you’ll have to read to discover (psst dog-grandfathers and the effect superpowers have on dealing with rude neighborhood boys.)

Tea, it would appear, has had a penchant for the epic recently — the hotly-anticipated movie version of Valencia has been crafted by no less than 21 filmmakers, each in charge of their own story chapter and distinct cast. (Cop your tickets to its June 21 and 27 Frameline world premiere, on sale starting Fri/31, at www.frameline.org.) One of Tea’s next projects is said to be a novel imagining the world in the wake of a 1990s apocalypse.

But enough of this future-mongering, because Mermaid of Chelsea Creek is a triumph in its own right, a stand-alone treat that I could not eat without chortling about to my own social circle at every possible juncture. I hope it makes its way into schools across the country, and trickles across the radar of those too young yet to attend Radar. Young adult literature, thank Harriet the Spy, is not without its strong young heroines, but Swankowski’s working-class journey goes beyond pluck. You never saw Ramona Quimby plump for a cereal dinner in solidarity with a hot-mess single working mom, nor decide, ultimately, that gender ambiguity is fine when it comes to a budding friendship-crush.

Ultimately, the book becomes what all Tea projects tend to be: assertions that survival is possible, if not inevitable — and that through achieving survival, we make the world a better place. Not all pigeons talk, but everyone deserves the freaky, feathered friends they need to get them through the summer.