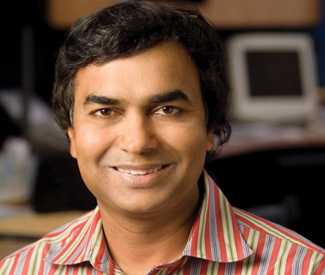 ON THE OM FRONT  Seven years ago, Gopi Kallayil, currently the Chief Evangelist for Google+ (there is indeed such a position), started a program at the Mountain View Google office called Yoglers: members go beyond merely practicing yoga in the office to participating more fully in its potential. It’s kind of like Google+ circles for yogis, where employees become teachers rather than just lunchtime practitioners. I recently spoke with Gopi, a force of nature himself who speaks often on such topics as “Envisioning the Conscious Corporation” and once engineered an online hangout with Desmond Tutu and the Dalai Lama, about this program and his life’s passion: merging business and technology with mindfulness practices like yoga and meditation.

Gopi Kallayil There are communities of Googlers that self-organize themselves into doing different things. For instance, there is a group for LGBT Googlers (and their straight allies) called Gayglers, a group for Jewish Googlers called Jewglers, and a group for Carpooling Googlers called Carpoolglers. Self-organizing yoga practitioners are called Yoglers.

SFBG Is this different than the corporate yoga program at Google?

GK Yes. Google does a lot of things to keep employees fit and healthy—there are gyms in many offices, and we have group exercise programs that include yoga instruction with contracted yoga teachers to lead these classes. But the Yoglers classes are led only by people who work for Google. They could be product managers or engineers, but they will take a break periodically and not just take a yoga class, but actually teach a yoga class.

GK They are trained teachers. People who work here are intensely intense about the things that they do. They are very passionate about all aspects of their lives.

SFBG How did you first become involved with yoga?

GK I grew up in India, and became a yoga teacher as a teenager. I was taught yoga by Swami Vishnudevananda, who is one of the people who first brought yoga to America. He taught it as a path to self-realization, but also as a practice that brings joy, peace, and happiness to the world. He wanted us to go and teach it to other people. Since then, I’ve always taught, and I’ve always taught for free.

GK When I joined Google, one of my colleagues here encouraged me to teach a yoga class. So I started teaching a class in a conference room to one student and called it Yoglers. It was a way I could bring yoga to my community at work and pass on this great tradition that I was blessed to have received. Word of mouth spread and years later it’s become a big movement across Google offices worldwide. I had no idea that something I started with one student would evolve to this level.

SFBG Do you think the location of the Mountain View office helped to launch Yoglers?

GK Without question, something like this could happen more easily in the Bay Area. This is a very awakened, conscious place. People are curious about these traditions and don’t look at them suspiciously. People have studied yoga here, they welcome it.

SFBG Why is it important to bring yoga into the workplace in society today?

GK It’s not just today. It has always been important. It was important 50 years ago, 100 years ago, as long as there have been human beings. Yoga and meditation help to create a higher quality, more conscious human being. And any organization—whether it’s a corporation or educational institution—is staffed and run by human beings. If we incorporate these practices into our working life, we get along with each other better, make better products, and make choices that will better serve our customers.

SFBG It’s great that tech companies are embracing yoga, but isn’t technology part of what’s making us scattered and stressed?

GK: Technology, if not used properly and consciously, has the capability to completely distract us and make us unproductive and frenzied. But it’s no different than many other innovations. It’s like fire. Ever since we’ve discovered it and known how to harness it, we’ve found it exceptionally useful. You can cook your food with it, you can melt and blow glass with it. But if you misuse it, you can burn yourself or raze an entire city to the ground. I only check email certain times a day — I’m not constantly looking at it. Technology is a powerful tool. But whether you use the tool to be productive or destructive is up to you.

GK When you practice yoga, you’re asked to bring your complete, 100 percent awareness to your body and your breath. If you practice regularly, it makes you more aware and conscious, and you make choices driven by that. The quality of your interactions improves. You stop checking your email when someone is talking to you. At Google, we’re building amazing technologies like self-driving cars, Google Glass, and Google+. And yet, the most important technology that every human being has access to is right within us: our body, our mind, our consciousness.

SFBG Any advice on how people can start a yoga or meditation program at work?

GK It’s simple. Go book a conference room. Sit, close your eyes, start meditating. Put up a sign that says, “Random acts of meditation.” It doesn’t matter if only one person shows. If you just sit there for 60 seconds and watch your breath, you have just started a meditation program. You don’t need a budget or resources. Someone just needs to step forward and do it.