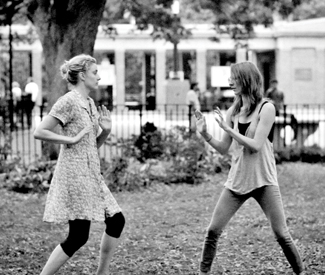 FILM Noah Baumbach isn’t exactly known for romance and bright-eyed optimism. Co-writing 2009’s Fantastic Mr. Fox with director Wes Anderson is maybe the closest to “whimsy” as he’s ever come; his own features (2010’s Greenberg, 2007’s Margot at the Wedding, 2005’s The Squid and the Whale, 1997’s Mr. Jealousy, and 1995’s Kicking and Screaming) tend to veer into grumpier, more intellectual realms. You might say his films are an acquired taste. Actual declaration overheard at this year’s San Francisco International Film Festival: “Am I going to see Frances Ha? Ugh, no. I can’t stand Noah Baumbach.”

Haters beware. Frances Ha — the black-and-white tale of a New York City hipster (Baumbach’s real-life squeeze, Greta Gerwig) blundering her way into adulthood — is probably the least Baumbach-ian Baumbach movie ever. Owing stylistic debts to both vintage Woody Allen and the French New Wave, Frances Ha relies heavily on Gerwig’s adorable-disaster title character to propel its plot, which is little more than a timeline of Frances’ neverending micro-adventures: pursuing her nascent modern-dance career, bouncing from address to address, taking an impromptu trip to Paris, visiting her parents (portrayed by the Sacramento-raised Gerwig’s real-life parents), “breaking up” with her best friend. It’s charming, poignant, it’s quotable (“Don’t treat me like a three-hour brunch friend!”), and even those who claim to be allergic to Baumbach just might find themselves succumbing to it.

Frances Ha marks the second film to feature a dance subplot for Gerwig, after Whit Stillman’s 2011 Damsels in Distress. (She also appeared in Greenberg but is probably best-known for her mumblecore oeuvre: 2008’s Baghead; 2007’s Hannah Takes the Stairs.)

“I love dancing,” she admitted on a SFIFF-timed visit to San Francisco. “I was never a professional, but I danced a lot growing up and I still go to dance class whenever I can. I don’t think there’s enough dancing in movies.”

Like Frances, she studied modern dance in college. “I did this kind of modern dance called release technique. A big component of it is learning how to fall. It’s connected to bouncing back from the ground, or giving into the ground — letting everything flow. It’s a beautiful way to dance, and the dance company that [Frances] wants to be a part of, that’s the kind of dance that they do,” she said. “I also thought it was this incredible metaphor for life: learning how to fall, because you’re going to. At first, as you’re learning how to do it, you get terribly banged up — and then at some point you just are falling and it’s not hurting you anymore.”

Though much of Frances Ha, which was co-scripted by Baumbach and Gerwig, is about its protagonist’s various relationship struggles, there’s another less-expected theme: class warfare (a mild version of it, anyway). Frances scrambles to pay her $1200 rent — previously, she’s seen paying $950 a month to sleep on a couch — while her housemate, who comes from a wealthy family and spends his days noodling on spec scripts, casually mentions the necessity of hiring a maid service. You know, for, “like, 400 bucks a month.”

“We didn’t set out to make a movie about class, specifically,” Gerwig noted. “But I think typically Americans have a lot of trouble talking about class, or even acknowledging that it exists. It operates on a really subtle level. You get out of college and you suddenly realize that some people are paying off loans, and some people aren’t. It can be hard to talk about. I’m very inspired by Mike Leigh’s movies, where it’s always there in the background. I felt like I wanted to have it in the movie, and Noah felt the same way, too.”

Later that day, Baumbach elaborated on the same thought. “Economics were really going to influence a lot of what Frances does, because the movie was structured by finding a home, lack of a home, constant movement,” he said. “Her economic reality had to be a huge component of her story.”

Frances Ha captures twentysomething ennui with the same honesty Baumbach deployed in Kicking and Screaming, though there are some key differences: the Kicking and Screaming guys were mere months post-graduation, while Frances, who is 27, is more removed from college — whether she wants to admit it or not. “It didn’t feel like the exact same territory, but I was aware that it was kind of addressing some of the stuff that I was addressing back then,” Baumbach said. (Not coincidental, one presumes, is the cameo in Frances Ha by Kicking and Screaming star Josh Hamilton.)

Though he won’t cop to naming his main character after, um, France, Baumbach does admit that the country’s films (he points specifically to works by Truffaut, Rohmer, and Carax) have had a strong influence on him as a director, and on Frances Ha in particular.

“I think [for these filmmakers], the joy of making the movie is somehow evident in the movie itself,” he said. “Sometimes, that can be annoying! But the rush you get from it, you can just feel, like, the pleasure of movies. With Frances Ha, I wanted to push that, and do things like have her run down the street [while David Bowie’s ‘Modern Love’ plays on the soundtrack]. Just go for it, because the movie really could hold it. I think a lot of [the films that inspired me] have that. And because a lot of the music is borrowed from those movies, it feels even more like a clear connection.”