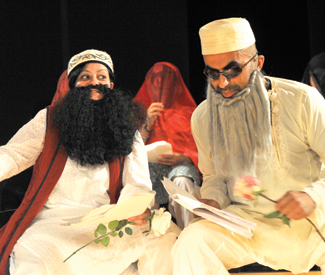 THEATER In the downstairs den of her Noe Valley home, director Vidhu Singh and her cast are rehearsing some of the opening scenes in a madcap and punchy satirical revue making its US premiere at the Brava Theater this week. In the center of the room, to the driving beat of some irresistible Eastern pop, an MC (played by veteran improv actor-teacher Mick Laugs) introduces the diverse ensemble in the manner of a runway fashion show, as each character parades to the front of the stage to strike a pose in her or his burqa — because, female or male, just about everyone wears a burqa in this play.

Especially in this domestic setting, the whole project seems a good-natured and relaxed affair. At the same time, it’s impossible to ignore the charge that comes with the satirical appropriation of this politically fraught piece of clothing, or miss the serious intention behind every comical line and gesture. For all its campy humor, Burqavaganza is a defiant piece of political theater — and, it turns out, a critique of much more than an embattled piece of female attire.

Written by award-winning Pakistani playwright, journalist, and human rights activist Shahid Nadeem, Burqavaganza sends up authoritarianism and extremism at large, the burqa becoming a byword for various public masks and ideological certainties thrown around by both sides in the tangled “war on terror.” The word itself is woven obsessively into the dialogue like a ubiquitous fabric, its constant iteration — including in names and titles — making for a comical punctuation that sounds more and more absurd as time goes on. By the end, “burqa” becomes a nonsense word, burbling on the surface of an irrational state of affairs churned by deeper interests and forces that otherwise go unnamed.

First produced in Lahore by the Ajoka Theatre Company — co-founded by Nadeem and wife Madeeha Gauhar (the play’s original director) — Burqavaganza was quickly banned by the Pakistani government after complaints from women members of a fundamentalist political party. That has not stopped it being mounted in various provinces of the country, however. As for its US debut, director Singh thinks it has something to offer local audiences beyond just entertainment.

“It seems to me that people want to talk about issues, but they don’t have a way of addressing the debate about the burqa; and the play does that using humor and satire. That makes it very accessible. It humanizes the characters while highlighting the debate,” Singh says. “I think the divide between the West and Islam is so sharp. The play tries to address both sides of the divide. On the one hand, it offends conservative Muslims, who think basically you’re making fun of the burqa. On the other hand, it’s also a critique of the West and the US’s attitude toward Islam, and parodies the war on terror. So it sort of offends people on both sides — and it’s funny, so it works.”

Positioning itself somewhere between Islamist extremism and Western imperialism, Burqavaganza critiques both from the ground of human dignity and respect for human rights. Such principled critique is more widespread throughout Muslim-majority countries than many here in the West might suspect, according to human rights lawyer and author Karima Bennoune, whose new book, Your Fatwa Does Not Apply Here: Untold Stories from the Fight Against Muslim Fundamentalism (forthcoming from W.W. Norton), is a far-flung firsthand survey of artists, intellectuals, and activists across the Muslim world combatting Islamist extremism in the cultural realm. Among the artists she profiles are Nadeem and Guahar. (In fact, she adapts her title from a line in another Ajoka Theatre play, Bulha). Bennoune says Ajoka has proved more outspoken in their critique of Muslim fundamentalism “than many liberal circles or diaspora populations in the West dare to be.”

“What is perhaps most remarkable is that the Ajoka Theatre Company debuted this play, complete with its satire of burqa-obsessed extremists, in Pakistan in 2007, as political violence was on the rise — and only about a month after the nearby killing of the 36-year-old Punjab minister for social welfare, the women’s rights advocate Zil-e Huma Usman,” says Bennoune in a recent email correspondence. “Her murderer said she was not sufficiently covered in her shalwar kameez [a traditional South Asian dress]. As I write in my book, the real ‘Burqavaganza’ was right there, just outside the theater door.”

For all its humor and high spirits, Burqavaganza has the potential to provoke questions as well as debate among the Bay Area audiences who come to see it. But that, enthuses Bennoune, is all to the good.

“The importance of a production of this kind in the US now after the Boston bombings — when there is still such a limited space to offer a sharply critical yet non-discriminatory response to the terrible mentality that accompanies jihadism — cannot be overstated. After all, as Nadeem reminds us, ‘We all live in a Burqavaganza.'”