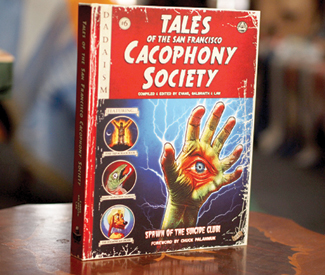 LIT If the intrinsic value of an ephemeral experience is its very impermanence, then attempting to capture it for posterity is an exercise fraught with peril. No sanitized textbook description of such chaos-driven movements as Dada, Situationism, and Fluxus could ever hope to capture the raw vibrancy of being a part of the action, and the true value of such movements has really never been in spectating, but from the transformation experienced by the participants while pushing their personal boundaries.

With that caveat in mind, the gorgeously-rendered, scrap-and-patchwork anthology Tales of the San Francisco Cacophony Society (Last Gasp, 300 pp., $39.95) does a pretty good job of conveying not just the external hi-jinks of a group bound together by a yen for the unpredictable, but also the internal philosophical trajectory of many of its members.

Designed to resemble a hardbound EC Comics collection, boldly adorned with a zombie-green, six-fingered hand further deformed by the presences of a bloodshot, unblinking eye smack in the middle of its lined palm, Tales of the San Francisco Cacophony Society is a collaborative effort between key cacophonists Kevin Evans, Carrie Galbraith, John Law, and, in a sense, the whole of the multi-faceted, loosely-knit “society” which ebbed and flowed through the secret pathways and deep underground spaces of the Bay Area and beyond from 1986 through the mid-aughts.

The comprehensive yet quirky tome gathers together an abundance of flyers, photographs, descriptions of momentous pranks and experiential escapades, and newspaper columns documenting such shenanigans as a Thomas Pynchon Walking Tour; the bunker-squatting “Atomic Café”; bridge-climbing; sewer-spelunking; art-car parades; a hide-and-chase game of “Smuggler” at Fisherman’s Wharf; and a rowdy afternoon of shopping cart sled-racing known as the Urban Iditarod. Strewn with colorful collages of ephemerabilia designed by Galbraith and brightly illustrated “Cacophony Factoids” by Evans, the densely-layered visuals bear a whiff of the cheerfully Dada-tastic aesthetic of counter-culture classic The Book of the SubGenius as well as the Cacophony Society’s own former newsletter of events, Rough Draft.

Birthed from the relatively short-lived but highly influential prankster cadre the Suicide Club, which operated from 1977 to 1982, the Cacophony Society itself has “spawned” a veritable pantheon of offbeat occurrences such as SantaCon, the Bay to Breakers Salmon Run, and that bloated megalopolis of arts festivals, Burning Man. In fact, it’s difficult to imagine a San Francisco without the insidious influence of an organization dubbed “the Merry Pranksters of the 1990s.” Even organizations and events (local and national) not specifically born of the society such as Improv Everywhere, Atlas Obscura, the Yes Men, and the Maker Faire bear its imprint: a sense of irreverence combined with a belief in the possible.

“There wasn’t anything that we could think of that we couldn’t figure out how to do,” reminisces Galbraith — who is notably the original instigator of the organizations’ iconic, unmediated Zone Trips (which came to include the first expedition to Black Rock Desert with Larry Harvey’s “man” in tow). This sentiment is echoed by Evans when asked his opinion on the key traits shared by cacophonists, “curiosity, creativity, a deep appreciation of the absurd and the silly, [and] an addiction to making something from nothing”.

Although the idea of a book about Cacophony had been floated around as early as the mid-’90s, it wasn’t until Evans called a meeting between some of his former cacophony comrades in 2010 that the idea began to take a concrete shape. A Bay Area-based fine artist and illustrator, Evans came to the meeting with an already thought-out concept for a “visual history” of the Cacophony Society, and though most of the other people at that first meeting decided against participating, Galbraith, who has a master’s degree in book arts, jumped onboard, eventually spearheading the layout and working most closely with publisher Last Gasp on the final incarnation.

Joining the project soon after Evans and Galbraith got rolling, John Law — a founding member of the Cacophony Society, and a long-time member of the Suicide Club before it — brought his extensive archive of flyers, newsletters, and more to the mix, and, with Galbraith, provided much of the written content. In the end the grueling, three-way editorial process became less about finding enough material for a book, but whittling all the available material down to 300 pages, a process Law likens to lopping off fingers.

“We could have compiled a thousand-page book without repeating anything, or becoming dull,” he muses ruefully by email. “My hope is that others who were involved will write their own books about the period.”

Until that happens, however, pranksters, subversives, free spirits, and urban explorers alike will want to go ahead and splurge on a copy of The Tales of the San Francisco Cacophony Society. And remember, though now technically defunct, the society has always been open to all. You may already be a member. *

For more readings and related events, including a May 31 party at the Castro Theatre, visit www.lastgasp.com or www.talesofsfcacophony.com.