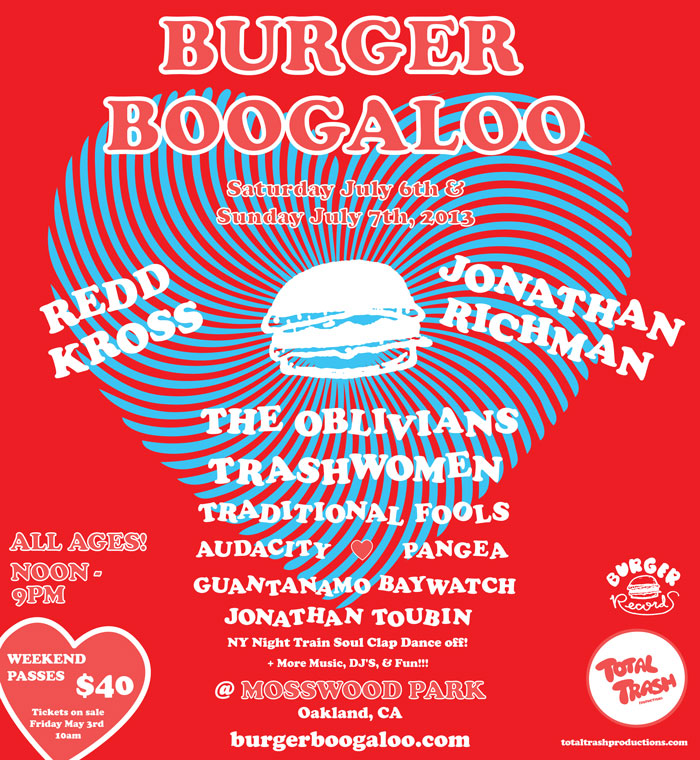 Flop, flop, flop. Can you hear that? It could be a burger flipping. Or maybe that’s the sound of your tanned, bloated belly landing between crisp white sheets after long stretches of outdoor music-listening, dirt(y) dancing, craft beer-imbibing, and gourmet food stand-patronizing. It’s festival season, and there’ve been some tasty developments in the past couple of weeks.

Burger Boogaloo (July 6-7) excited Oaklanders and beyond by releasing its delictable lineup full of icons and punks, Outside Lands (Aug. 9-11) announced its even fancier food lineup, and hey, BottleRock is this weekend (May 9-12)

BottleRock Napa (May 9-12)
So BottleRock is a bit of a trek — it’s out in Napa Valley, but it’s a four-day-long fest in a real pretty location (that’s bound to get more unclouded sun than SF). It kicks off this Thu/9 with live music, food, comedy and yes, beer and wine. The top billing on the lineup is a bit ho-hum, with broadly appealing rock’n’roll, blues rock, and folk acts like Kings of Leon, the Black Keys, and Zac Brown Band, but there’s also the Flaming Lips, the Shins, and the thunderous Alabama Shakes. And for a certain breed of ‘90s kid: Primus and Cake.

Burger Boogaloo (July 6-7)
Here’s the one to watch. Burger Records just keeps outdoing itself. It has fests around the country (including a recent biggie on its home turf of Orange County, Burgerama II) and brings together an elite mix of sloppy, legendary, and up-and-coming surf, garage, fun punk, and slack doo-wop acts. Burger Boogaloo is even more special because it brings Burger together with our own local slop heroes Total Trash Booking, for a mega-fest created by two equally appealing masters. Plus, the Boogaloo is in a park, so things could get steamy.

Everyone is talking about the disparate headliners early LA punk band Red Kross and Modern Lover/singer-songwriter Jonathan Richman — and rightfully so, they are incredible — but can we also take a minute to thank satan for the Trashwomen addition to the lineup? Epic. For those somehow unaware, the Trashwomen are Bay Area noisy surf-punk royalty, born of the ‘90s, and featuring Tina Lucchesi (of every band ever), Danielle Pimm, and Elka Zolot (Kreayshawn’s hot mama).

Add to that Ty Segall’s early trio Traditional Fools, Audacity, Guantanamo Baywatch (listen to thumping “Barbacoa” now, please), and Pangea. And, with the addition of NY Night Train’s Jonathan Toubin, there will be a Mosswood Park soul clap dance off.

I can hardly wait to kick off these smelly sneakers.

Outside Lands (Aug. 9-11)
The crème de le crème of foodie-meets-rocker outdoor fêtes, Outside Lands knows what its fan base wants. So with nearly as much fanfare as its band lineup (which this year includes Paul McCartney, Phoenix, D’Angelo, Foals, and Yeah Yeah Yeahs, and around 20 or so others), the fest also releases its noted food vendor roundup.

There are 75 food stuff sellers at Outside Lands’ “A Taste of the Bay Area” 2013 including “returning favorites” like massive pizza truck Del Popolo, carnival fare brick-and-mortar business Straw, 4505 Meats, American Grilled Cheese Kitchen, and Pacific Catch. Newbies this year include newish SF favorite Wise Sons Deli, Rich Table, 1300 on Fillmore, Blue Bottle Coffee Co., and Nopa offshoot, Nopalito. And worry not, my personal favorite from last year (besides Metallica), Azalina’s, will be back with the Malaysian nachos that stole my blackened heart.

The vendors are usually placed in two distinct sections, with somewhat close proximity to the main stages, plus there’s the Wine Lands circus tent, Beer Lands, and Chocolate Lands. So much better than overcooked hot dogs and stale keg beer, right?