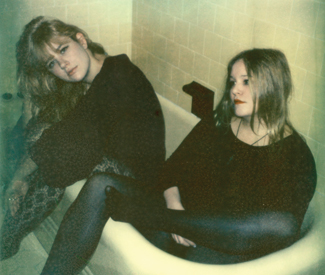 TOFU AND WHISKEY The twin star driving forces behind Bleached (hellobleached.tumblr.com) have been around. Not in a cruising with delinquents kind of way, but that’s probably where their music is best blasted — careening down the California coast in a shiny convertible with a shitty ex-lover or two, rooftop down, an open bag of Flamin’ Hot Cheetos, lipstick-stained cola can, and the stereo crackling.

Really though, being around more refers to the basic facts that singer-guitarist Jennifer Clavin and bassist Jessie Clavin have been playing music together for a long time, since junior high, and have toured nearly as long. More so, they’ve been connected since birth — they’re sisters who grew up together in the sleepy San Fernando Valley and reached for instruments partially out of boredom and isolation.

Their first notable band was early Aughts-born Mika Miko, which became known for its near-residency at formerly grimy downtown LA venue the Smell — and its frenetic live shows on tour with bands like the Gossip and No Age.

“Mika Miko was a mutual breakup,” younger sister Jessie says with a casual Valley girl affect from the dusty tour road between El Paso and Austin, Texas. “It ended because everyone wanted to do something else, go different directions. But me and Jen still wanted to play music together.”

They began slowly picking up the pieces for Bleached shortly after Mika Miko’s 2010 breakup and released three well-received seven-inches, but had yet to debut a proper LP until just recently. On April 2, they unfurled a melodious, punks-in-the-sun full-length, the punchy pop Ride Your Heart on Dead Oceans. On tour promoting the new record, Bleached will be in San Francisco Sun/5 at the Independent, 628 Divisadero, SF. www.theindependentsf.com.

So while Jen and Jessie are blood-related and forever sonically entwined, there’s an exhilarating feeling of something new afoot at this very moment in time. “I feel like it’s a new little chapter right now for us,” Jessie says. “For so long we were just like, playing live shows with songs from the seven-inches, and that’s basically all people really knew. So now that it’s out, this tour just feels really exciting — people are going to have the record, they’ll know what to expect.”

“At the beginning [of Bleached] everyone was comparing us to every current girl band, but not anymore, maybe now that our record came out, that’s why it’s changed.”

The rock’n’roll record hints at early punk like the Ramones around its edges on opener “Looking for a Fight,” but that’s washed away with cooling waves of jangly California surf pop melodies and mid-century teen dream vocals on songs like “Dreaming Without You” and “Dead Boy.” And despite the inherent upbeat nature of the tracks, much of the lyrics in songs like “Love Spells” and “When I Was Yours” reflect a somewhat darker time for singer Jen, who moved to New York briefly between the fall of Mika Miko and rise of Bleached. Suffice to say, she’s not singing about her cats or whatever.

In NYC she joined the band Cold Cave, desperately missed her sister, dated the wrong kind of boy, and wrote breakup songs for the band she’d soon reform back on the West Coast. “I was going through a really rough time,” Jen says as Jessie passes her the phone. “I moved back to LA and stayed in [our] parent’s house in the desert for a month…and locked myself in my room, kept myself distracted by writing a bunch of songs.”

Ride Your Heart was recorded and produced last fall in various studios in Burbank and at Bedrock LA in Echo Park. At the time, Jen was listening to a lot of Blondie (there’s a song on the album called “Waiting By the Telephone”), and both sisters survived on a steady diet of Bowie — Ziggy Stardust era — along with the the Stones, Velvet Underground, and the Kinks. “We communicate better when we know exactly what we’re listening to,” Jessie says.

And communication is key to any relationship, particularly the mythic sibling-bandmate dynamic. Though this one seems far less tumultuous then those widely discussed rock’n’roll brotherhoods. “We’ve been doing this for so long. It helps to work through it and get stronger,” says Jessie. That connection was tested when Jen was in New York. While she was with Cold Cave, she was still occasionally working on songs for an early version of Bleached, but the distance was too great. “We were trying to still write back and forth, but it was just difficult, it wasn’t the same as when we’re in the room together and start playing and Jen starts singing and has the melody. It just didn’t work out.”

Now, Jen lives in Hollywood, walking distance from the Universal backlot, and Jessie lives in Silverlake. The local LA bands they listen to are most frequently their friends’ acts, including Pangea and Audacity, and they like Oakland’s Shannon and the Clams, and other Burger Records acts. As is the current zeitgeist, Jessie says Bleached might soon be doing a tape with Burger too.

“We grew up with mixtapes. I definitely remember first hearing the Germs [that way],” Jessie says. “I was transitioning from listening to like, KROQ alternative to like, underground, but then I’d go to school in a Germs shirt and think I was really cool.”

Crystalline psych-folk crooner Mariee Sioux’s twinkly followup to debut Faces in the Rocks (2007), Gift for the End was released a whole year ago, but there was never a proper SF release party (and there was some drama with the label it was supposed to be on going defunct) so the local songwriter is celebrating now. It’s a haunting, whispery, tender album, like a less annoying Joanna Newsom selection, and deserving of attention — no matter if that’s taking place on a much later date. With Alela Diane, Conspiracy of Venus.

Experimental contemporary live music always seems to creep its way into the SF International Film Festival. And who better to bring weirdo sound experiments than the current king of such things: Mike Patton. The operatically inclined Patton, perhaps best known as the debonaire genius behind Faith No More and Mr. Bungle (and recently as songwriter for the film The Place Beyond the Pines), will appear alongside three percussionists: Scott Amendola, Sleepytime Gorilla Museum’s Matthias Bossi, and William Winant at the Castro. The quartet, which has never before performed in this arrangement, will play an original score to 1924 German expressionist silent film, Waxworks.