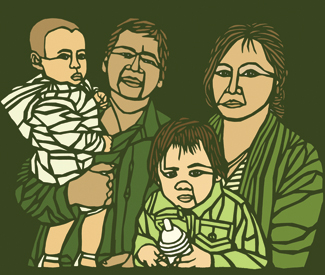 The first week in April was a rough time for Connie Salguero. The Filipina nursing assistant, who says she would’ve been eligible to retire in two years, reported to her shift at the University of California San Francisco medical center at Mt. Zion on April 1 — and was told she was laid off. Two days after that, she was forced out of her home through an eviction, but fortuitously met an elderly Filipina woman who said Salguero could stay with her until she gets back on her feet.

“This manager said to me, Connie, come here, let’s talk,” and delivered the bad news, Salgeuro recounted, getting a little misty-eyed. Two other Filipina hospital assistants in her unit met with the same fate that day, she said.

“I’m trying to find a job,” Salguero said. “It’s very hard. But I will survive.” She projected a sense of resolve despite the whirlwind of sudden stress, which seemed fitting for someone whose job entailed feeding, bathing, and assisting up to ten bedridden patients at a time, many of them suffering from cancer.

Salguero said management told her the layoffs were necessary because of the most recent wave of federal budget cuts. But Cristal Java, lead organizer for UC patient care technical workers’ union, AFSCME 3299, interjected during an interview with the Bay Guardian to refute that explanation, calling it “total crap. They don’t want to tell workers the truth,” Java said, “which is that the hospitals are extremely profitable.”

Salguero is one of about 25 UCSF certified nursing assistants whose recent layoffs prompted AFSCME to register a formal complaint with the Public Employee Relations Board, an agency that mediates labor disputes. The CNA layoffs hit in March and early April as part of a raft of cutbacks that eliminated a total of 300 full-time equivalent positions. Some of those positions were unfilled while other staffers were reassigned elsewhere or had their hours cut; a total of 75 individuals were laid off.

The cuts prompted union representatives to organize a protest at UCSF’s Parnassus Campus April 4, with San Francisco Sup. John Avalos and California Sen. Leland Yee turning out in support of the workers. Salguero was there too, waving a sign, and she wound up telling her story for an international broadcast by a Filipino news station. Things took a dramatic turn when police arrived on the scene, and Union President Kathryn Lybarger and some others were escorted off the premises in handcuffs.

Asked to explain the rationale behind the layoffs, UCSF spokesperson Karin Rush-Monroe responded, “We evaluated the impact of the Affordable Care Act, expected reductions in Medicare, MediCal and private insurance reimbursements,” as well as employee benefits and rising costs in drugs and medical supplies, and ultimately decided on a 4 percent labor budget cut. “We must make a ‘course correction’ if we are to maintain our resources to care for our patients,” Rush-Monroe said.

But the staffing cuts hit just weeks after AFSCME published a blistering report, titled “A Question of Priorities,” charging that UC has prioritized profit margins at its medical centers since 2009 while needlessly eliminating frontline staff positions, all to the detriment of patient care.

“It feels very much like they’re chasing down the Wall Street model of business,” Randall Johnson, an MRI technologist at UCSF Parnassus Campus who is active with Local 3299, told the Guardian. “We’re pressed to move faster and faster and faster. It’s more about profit than it is about patient care.”

Steve Montiel, spokesperson for UC Office of the President, told us that UCSF is “consistently ranked as one of the top hospitals in the country by U.S. News and World Report,” and pointed out that the AFSCME report coincided with an ongoing contract dispute concerning patient care technical workers, which may lead to a strike authorization in the next few weeks.

Peppered with anecdotal horror stories describing things like dried blood observed on operating room tables at facilities where custodial staffing was cut to a bare minimum, or an incident in which a mentally altered patient was found on a window sill at a medical facility where harrowed nursing assistants’ attention was divided too many ways, the report portrays an unsafe environment that seems out of sync with the system’s reportedly healthy earnings derived from patient care.

“Bring it up at bargaining, and you get told to kick rocks,” said union spokesperson Todd Stenhouse. AFSCME has called upon state agencies and lawmakers to investigate UC policies on “cutting costs, reducing staff, and maximizing revenue.”

“We’ve been getting lots of reports about short staffing, and no coverage for breaks,” said Tim Thrush, a diagnostic sonographer who works with patients experiencing complications in pregnancy, and has worked at UCSF for years. “If you get a break or a lunch, it seems to be rare — even though it’s state law.” Thrush added. “It looks to us … that UC’s response to us raising concerns … is to say, OK well then let’s make it worse. Let’s lay off a whole bunch of people.

“It’s been very disappointing,” he said, “and it’s getting to be kind of scary.”

The report emphasizes California Department of Public Health findings of violations relating to bedsores from 2008 to 2012. The sores can occur if a patient stays in one position for too long, causing reduced blood flow and damage to skin tissue, and have been linked to infection.

Among those affected by the layoffs were “lift and turn team” members, including care workers tasked with turning immobilized patients to prevent bedsores.

Ironically, Rush-Monroe, the UCSF spokesperson, noted in response to a Guardian query that a $300,000 “incentive pay” bonus CEO Mark Laret received in 2011 was based on multiple “clinical improvement goals” that had to be satisfied in order to qualify for the 2011 compensation increase. One of these targets was a reduction in the number of hospital-acquired bedsores.

While the union report points to rising instances of bedsores, and the UCSF administration claims they were reduced to the extent that the CEO was monetarily rewarded for the accomplishment, a quick look at scores on hospital ranking website California Hospital Compare showed that pressure sore rankings at UCSF are almost exactly even with the statewide average.

In the midst of these staffing cuts, AFSCME charges, the $6.9 billion system has enjoyed robust finances, with UCSF earning $100 million in net revenue last year. Between 2009 to 2012, management positions increased by 38 percent system-wide, while payroll costs for managers grew by 50 percent, with an additional $100 million a year allocated to administrative staffing.

According to a 2013-14 budgetary report prepared at the UC level, the system’s network of public universities have suffered deep financial cuts while its five medical centers “have continued to flourish and grow,” and “enjoy robust earnings.”

A revenue breakdown in the UC budget report shows that 62 percent of medical center earnings system-wide were derived from private health care plan reimbursements, while about a third came from Medicare and MediCal, funded by the federal and state government.

Meanwhile, ASCFME’s report has raised eyebrows in the California Senate. Sen. Ed Hernandez, who represents part of Los Angeles County and chairs the Senate Health Committee, “has expressed an interest in looking at it further,” according to committee consultant Vincent Marchand. “We may decide to call a hearing” sometime in May to see if further action is warranted, he added.

Sen. Yee lambasted the UC system for what he called “blatant disregard for the working staff.” Yee said the layoffs raised concerns about the quality of patient care, saying, “How do you lay off 300 individuals and think that it’s not going to compromise patient care?”

Yee added that he thought the UC budget ought to be scrutinized when it goes before the Senate. “Although the Constitution gives the UCs of California tremendous autonomy via the Board of Regents, ultimately we in the Legislature still allocate dollars … so there is a legislative and moral responsibility that we need to exercise,” he said. “Are the dollars within UC being used appropriately to take care of patients and in ensuring their safety?”

In early 2015, UCSF will open its new Mission Bay complex, a 289-bed facility featuring a children’s hospital with an urgent/emergency care unit and an adult care unit for cancer patients. The estimated price tag for the project is about $1.5 billion, and construction costs associated the project were referenced in an Oct. 12 letter Laret, UCSF’s CEO, issued to hospital staff announcing the pending staffing cuts.

Thrush questions decisions made at the highest administrative levels. Laret is “eliminating 300 jobs, and we’re opening a new facility, and he’s getting a $300,000 bonus,” he said, referring to a “retention bonus” expected to be awarded this year, which could be followed by a $400,000 bonus in 2014. “Why is he getting a huge bonus if we’re having to lay off so much staff?”

With a total compensation of around $1.2 million in 2011, Laret’s salary seems excessive in comparison with that of frontline workers — and it is. At the same time, it seems to be within the realm of a CEO of a major medical facility, a quick Internet search reveals.

ACSFME’s report targets Laret specifically, saying he repeatedly emphasized to hospital staff, “When you see patients, you should see dollar signs.” Johnson, the MRI technician, told the Guardian he heard Laret make this statement years ago, when he first came on as CEO. “I know that some physicians were outraged by it,” he said. “I heard that the physicians told him to stop, and he stopped saying it.” UCSF did not respond to Guardian requests for a comment on this allegation.

The report also focuses on a practice of so-called “VIPs” — patients connected with the UC Regents or other influential persons — receiving preferential care. “I got called in on a Sunday to take care of a celebrity, because they had a headache,” said Johnson. “I’ve seen patients have to be on hold so we can scan the [VIPs]. They definitely get preference. I’ve been told, if one of those VIPs comes in, we have to get them on the scanner.” UCSF didn’t respond to Guardian questions concerning VIP patient treatment, either.

Montiel, the media relations director for the UC system, responded to a Guardian query with a wholesale rejection of the detailed 40-page report, without directly addressing any of the allegations. Instead, he said the whole controversy arose from a labor rift over pension reform.

“These claims by AFSCME coincide with a bargaining impasse, and the scheduling of a strike vote by its patient care technical workers,” Montiel wrote in an email. “Quality of care is not the issue. The real issue is pension reform. AFSCME has resisted pension reforms that eight unions representing 14 other UC bargaining units have agreed to. The reforms also apply to UC faculty and staff not in unions.”

AFSCME recently announced that its membership would begin voting on April 30 over whether to authorize a strike, following months of stalled negotiations over a contract that expired last September. Stenhouse, the union spokesperson, called it “the impasse of impasses” yet suggested to the Guardian that the strike authorization vote was a side issue from the concerns raised in the whistleblower report. The workers are there to “provide patient care,” he told the Guardian. “They’re not making Buicks.”

“This report is about something much bigger than our members’ livelihoods,” Lybarger stated when the report was released. “It’s about whether the UC is prioritizing quality care for the millions of Californians who put their lives in our hands.”