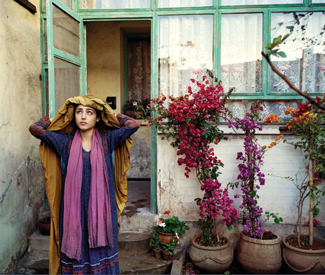 The Artist and the Model (Fernando Trueba, Spain, 2012) The horror of the blank page, the raw sensuality of marble, and the fresh-meat attraction of a new model — just a few of the starting points for this thoughtful narrative about an elderly sculptor finding and shaping his possibly finest and final muse. Bedraggled and homeless beauty Mercè (Aida Folch) washes up in a small French town in the waning days of World War II and is taken in by a kindly woman (Claudia Cardinale), who seems intent on pleasantly pimping her out as a nude model to her artist husband (Jean Rochefort). As his former model, she knows Mercè has the type of body he likes — and that she’s capable of restoring his powers, in more ways than one, if you know what I mean. Yet this film by Fernando Trueba (1992’s Belle Époque) isn’t that kind of movie, with those kinds of models, especially when Mercè turns out to have more on her mind than mere pleasure. Done up in a lustrous, sunlit black and white that recalls 1957’s Wild Strawberries, The Artist and the Model instead offers a steady, respectful, and loving peek into a process, and unique relationship, with just a touch of poetry. Fri/26, 1pm, and Sun/28, 6:30pm, Kabuki. (Kimberly Chun)

The Daughter (Alexander Kasatkin and Natalia Nazarova, Russia, 2012) Imagine a serial-killer tale as directed by Tarkovsky and you’ll get an idea of this fascinating, ambiguous Russian drama by co-directors Aleksandr Kasatkin and Natalia Nazarova. Someone is murdering teenage girls in what otherwise seems a tranquil village backwater. That’s one reason the almost painfully naïve Inna (Maria Smolnikova) is kept on a fairly tight leash by her gruff, conservative widower father (Oleg Tkachev), who expects her to perform all housekeeper duties and mind a little brother. When brash, borderline-trashy new schoolmate Marta (Yana Osipova) surprisingly decides to make Inna her best friend, she’s both a liberating and dangerous influence. Less interested in narrative clarity than issues of morality, spirituality, and guilt (at one point the killer confesses to a priest whose daughter he murdered — tormenting the cleric who is bound to confidentiality), this often-gorgeous feature is a worthy addition to the long line of somber, meditative Russian art films. Fri/26, 6:15pm, and Sun/28, 1pm, Kabuki; May 6, 9pm, PFA. (Dennis Harvey)

The Kill Team (Dan Krauss, US, 2012) Dan Krauss’ documentary chronicles the shocking case of a US Army unit in Afghanistan whose squad leader, one Sgt. Calvin Gibbs, encouraged his men to kill unarmed, unaccused civilians for fun, then cover it up as alleged self-defense. (He also collected severed fingers for an eventual bone necklace.) When subordinate Adam Winfield was disturbed enough by this to tell his parents (his father a Marine vet), and ponder informing officials, he was threatened with his own lethal “accident.” Once the scandal finally broke, he found himself on military trial for murder along with Gibbs and others. While sometimes a little too slickly made in a narrative-feature kind of way, this is a potent look at the vagaries of military justice, not to mention a military culture that can foster dangerously frustrated adrenaline junkies. As one of Winfield’s fellow accused puts it, Afghanistan was “boring as fuck” because they expected to be “kickin’ ass” when “instead we’re forced to help ’em build a well, or a school, or whatever.” Another shrugs “It was nothing like everyone hyped it up to be … and that is probably partly why, uh, things happened.” Fri/26, 9pm, PFA; May 6, 3:15pm, and May 7, 6pm, Kabuki; May 9, 6pm, New People. (Harvey)

Rosie (Marcel Gisler, Switzerland, 2013) Moms: can’t live with ’em … and can’t live with ’em. Roughly, that’s the predicament of successful gay writer Lorenz (Fabian Kruger) when his hard-drinking independent mater Rosie (Sibylle Brunner) keels over with a heart attack. His heart is with his tough old bird of a mother — unlike his more conventional sister (Judith Hofmann) — though a young, adorable fanboy of a neighbor (Sebastian Ledesma) is intent on competing for his attentions. Director and co-writer Marcel Gisler spares no warmth or care when it comes to filling out the story fully, as when Lorenz discovers that he has more in common with his seemingly inaccessible late father than he ever imagined. While Rosie paints a rosier, slightly more sentimental picture, imagine a warmer and fuzzier yet still renegade Rainer Werner Fassbender nursing a wisecracking, headstrong Emmi post-1974’s Ali: Fear Eats the Soul. Fri/26, 9:30pm, Kabuki; Sun/28, 9pm, PFA; Tue/30, 6pm, Kabuki. (Chun)

You’re Next (Adam Wingard, US, 2011) The hit of the 2011 Toronto Film Festival’s midnight section — and one that’s taking its sweet time getting to theaters — indie horror specialist (2010’s A Horrible Way to Die, 2007’s Pop Skull, 2012’s V/H/S) Adam Wingard’s feature isn’t really much more than a gussied-up slasher. But it’s got vigor, and violence, to spare. An already uncomfortable anniversary reunion for the wealthy Davison clan plus their children’s spouses gets a lot more so when dinner is interrupted by an arrow that sails through a window, right into someone’s flesh. Immediately a full on siege commences, with family members reacting with various degrees of panic, selfishness, and ingenuity, while an unknown number of animal-masked assailants prowl outside (and sometimes inside). Clearly fun for its all-star cast and crew of mumblecore/indie horror staples, yet preferring gallows’ humor to wink-wink camp, it’s a (very) bloody good ride. Sat/27, 11:30am, Kabuki; May 1, 9:45pm, Kabuki. (Harvey)

Thérèse (Claude Miller, France, 2012) Both Emma Bovary and Simone de Beauvoir would undoubtedly relate to this increasingly bored and twisted French woman of privilege stuck in the sticks in the ’20s, as rendered by novelist Francois Mauriac and compellingly translated to the screen by the late director Claude Miller. Forbiddingly cerebral and bookish yet also strangely passive, Thérèse (Audrey Tautou) looks like she has it all from a distance — she’s married to her best friend’s coarse, hunting-obsessed brother (Gilles Lellouche) though envious of her chum’s affair with a handsome and free-thinking Jewish student. Turns out she’s as trapped and close to death as the birds her spouse snares in their forest, and the suffocatingly provincial ways of family she’s married into lead her to undertake a dire course of action. Lellouche adds nuance to his rich lunk, but you can’t tear your eyes from Tautou. Turning her pinched frown right side up and hardening those unblinking button eyes, she plays well against type as a well-heeled, sleepwalking, possibly sociopathic sour grape, effectively conveying the mute unhappiness of a too-well-bred woman born too early and too blinkered to understand that she’s desperate for a new century’s freedoms. Sat/27, 3pm, Kabuki; Mon/29, 6:30pm, New People. (Chun)

Ernest & Celestine (Stéphane Aubier, Vincent Patar, and Benjamin Renner, France/Luxembourg/Belgium, 2012) Belgian animators Vincent Patar and Stéphane Aubier are best known for the stop-motion shorts series (and priceless 2009 subsequent feature) A Town Called Panic, an anarchic, absurdist, and hilarious creation suitable for all ages. Their latest (co-directed with Benjamin Renner) is … not like that at all. Instead, it’s a sweet, generally guileless children’s cartoon that takes its gentle, watercolor-type visual style from late writer-illustrator Gabrielle Vincent’s same-named books. Celestine (voiced by Pauline Brunner) is an orphaned girl mouse that befriends gruff bear Ernest (the excellent Lambert Wilson), though their improbable kinship invites social disapproval and scrapes with the law. There are some clever satirical touches, but mostly this is a softhearted charmer that will primarily appeal to younger kids. Adults will find it pleasant enough — but don’t expect any Panic-style craziness. Sun/28, 12:30pm, and May 1, 7pm, Kabuki. (Harvey)

Marketa Lazarová (Frantisek Vlácil, Czech Republic, 1966) An extraordinary evocation of medieval life, this 1966 black and white epic — considered by some the greatest Czech film ever made — is being reprised at SFIFF in honor of the festival’s late board chairman and generous benefactor George Gund, for whom it was a personal favorite. The violent struggle between pagan feudalist clans and rising Christian political forces in 13th century Eastern Europe is dramatized in brutal yet poetical form here. You will be very glad you didn’t live back then, or suffer the privations director Frantisek Vlácil and his crew did during an apparently very tough rural, mostly wintertime shoot. But you won’t forget this cinematically dazzling if sometimes opaquely told chronicle based on a classic Czech novel. Sun/28, 12:30pm, PFA; May 3, 8:45pm, New People. (Harvey)

Museum Hours (Jem Cohen, US, 2012) Feature documentaries Benjamin Smoke (2000) and Instrument (2003) are probably Jem Cohen’s best-known works, but this prolific filmmaker — an inspired choice for SFIFF’s Golden Gate Persistence of Vision Award, honoring “a filmmaker whose main body of work is outside the realm of narrative feature filmmaking” — has a remarkably diverse resume of shorts, music videos, and at least one previous narrative film (albeit one with experimental elements), 2004’s Chain. Cohen appears in person to discuss his work and present his latest film, Museum Hours, about a guard at Vienna’s Kunsthistorisches Museum (“the big old one,” the man calls it) who befriends a Montreal woman visiting her comatose cousin. It’s a deceptively simple story that expands into a deeply felt, gorgeously shot rumination on friendship, loneliness, travel, art history and appreciation, and finding the beauty in the details of everyday life. Sun/28, 5:30pm, Kabuki. (Eddy)

The Patience Stone (Atiq Rahimi, France/Germany/England/Afghanistan, 2012) “You’re the one that’s wounded, yet I’m the one that’s suffering,” complains the good Afghan wife of Patience Stone in this theatrical yet charged adaptation of Atiq Rahimi’s best-selling novel, directed by the Kabul native himself. As The Patience Stone opens, a beautiful, nameless young woman (Golshifteh Farahani) is fighting to not only keep alive her comatose husband, a onetime Jihadist with a bullet lodged in his neck, but also simply survive on her own with little money and two small daughters and a war going off all around her. In a surprising turn, her once-heedless husband becomes her solace — her silent confidante and her so-called patience stone — as she talks about her fears, secrets, memories, and desires, the latter sparked by a meeting with a young soldier. Despite the mostly stagy treatment of the action, mainly isolated to a single room or house (although the guerilla-shot scenes on Kabul streets are rife with a feeling of real jeopardy), The Patience Stone achieves lift-off, thanks to the power of a once-silenced woman’s story and a heart-rending performance by Farahani, once a star and now banned in her native Iran. Mon/29, 6:30pm, and Tues/30, 8:45pm, Kabuki. (Chun)

Peaches Does Herself (Peaches, Germany, 2012) Canadian-born yet the quintessential modern Berlin act — transgressively sexed-up electroclash slash-performance artist — Peaches delivers an expectedly high-concept live show in this nimbly cinematic concert movie. The first 15 minutes or so are absolutely great: raunchy, hilarious, imaginatively staged (completely with an orgiastically inclined dance troupe). But after a while it really begins to bog down in prolonged appearances by elderly burlesque-type standup Dannii Daniels, stilted ones by Amazonian transsexual Sandy Kane, and an attempt at a quasi-romantic-triangle narrative that is meant to be funny and outrageous but just kinda lies there. Diehard fans will be thrilled, but most viewers will hit an exhaustion point long before the film reaches its (admittedly funny) fadeout. Mon/29, 9:45pm, and May 2, 9:15pm, Kabuki. (Harvey) *