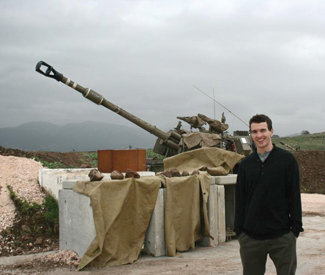 The UC Berkeley Student Senate has passed a bill that calls upon the university to withdraw nearly $12 million in investments from corporations that do business in the Palestinian West Bank, including Caterpillar, Cement Roadstone Holdings, and Hewlett Packard Company. The bill, SB 160, passed at 5am April 18 by a slim 11-9 margin after 10 hours of emotional debate.

When the final vote count was announced, some students cheered and others broke down in tears. While the measure is largely symbolic and unlikely to change university policy, Israel’s biggest supporters take such divestment votes very seriously and they were actively trying to influence the outcome of this measure.

The fate of the bill is now in the hands of student President Connor Landgraf, a senior bioengineering major who promised student leaders during his campaign that he would not veto any divestment measure. But now, with the bill sitting on his desk, Landgraf is waffling and supporters of the measure say that may be partially because a pro-Israel group appears to have sponsored his trip to Israel last year.

“During my campaign I did say I wouldn’t veto, but now I have different responsibilities,” Landgraf told the Bay Guardian. Since Thursday’s vote, Landgraf said his phone has been ringing off the hook. “I’ve received literally hundreds of emails, and I’m under a lot of pressure.” [UPDATE 4/24: Landgraf has issued a statement criticizing the bill, but saying that he won’t veto it.]

Although ASUC does not exercise any formal control over the school finances, UC student politics have increasingly become a symbolic battleground for a larger debate over the Israel’s human rights record.

Student Senator George Kadifa, who authored the bill, is hopeful that other campuses will follow Berkeley’s lead: “I’d like to appeal directly to other students governments that have Palestinian communities on campus,” he told the Guardian. “If any other students were found to have their houses demolished, or were forced to go through checkpoints to visit their families, would we be silent about that?”

The three companies targeted by Kadifa’s bill are involved in providing materials used to construct Israeli settlements, equipping West Bank checkpoints, and manufacturing bulldozers used to demolish Palestinian homes. Daniel Aranki, a Palestinian computer science graduate student, explained that Palestinian students on campus view the university’s investments in these companies as a personal affront: “It’s my money I pay to the university, and it’s invested in human rights violations, against my own family and people that I grew up with,” he told the Guardian. The divestment vote at Berkeley is part of a larger push on UC campuses to highlight Israel’s human rights record. Over the last year alone, UC Irvine, San Diego, Santa Barbara, and Riverside have all considered various divestment proposals. In response, national pro-Israel organizations are pushing back and directly urging campus leaders to counter the divestment movement.

In 2010, when the ASUC passed a similar divestment measure, the San Francisco-based Israeli console Akiva Tor reached out to then-President Will Smelko and convinced him to exercise his veto. “He said this is not right, this is morally wrong, and he explained to me why it was wrong,” Smelko told J Weekly.

Opponents consider divestment a divisive and counterproductive strategy that unfairly singles out Israel for criticism, and divestment on campus has emerged as a major front in the national debate over Israel.

Speaking at American Israel Public Affairs Committee’s annual policy conference in 2010, Leadership Development Director Jonathan Kessler vowed to nip the divestment movement in the bud: “How are we going to beat back the anti-Israel divestment resolution at Berkeley? We’re going to make sure that pro-Israel students take over the student government and reverse the vote. This is how AIPAC operates in our nation’s capital. This is how AIPAC must operate on our nation’s campuses.”

Leading up to last week’s vote, pro-Israel organizations moved to build on campus opposition to divestment. AIPAC flew out student senator and divestment opponent Mihir Deo to its annual policy conference in February.

“Divestment is very extreme, it’s equating Israel with Sudan and South Africa,” Deo told the Guardian following the vote. “The Jewish community is pretty hurt over this.” Deo clarified that his experience at the AIPAC conference did not motivate him to vote against divestment. But he does think that Landgraf should exercise his veto. Landgraf’s change of thinking may have also been influenced by a brief trip he took to Israel in January 2012 with Project Interchange. The project, founded by the American Jewish Committee (AJC), sends up-and-coming student leaders to Israel. The trips are free and intended to allow participants to “experience Israeli society, connect with their Israeli counterparts, and learn about Israel’s extensive contributions in their field.”

Despite photos of Landgraf on the organization’s Facebook page, the student body president would not confirm that he participated in the trip, calling it a “personal matter.” But since the passage of the divestment bill, the AJC’s Israel Action Network issued action alert calling on Landgraf to veto the bill.

On April 18, UC Chancellor Robert Birgeneau announced his opposition to divestment, promising the bill would have no effect of the UC’s investment decisions.