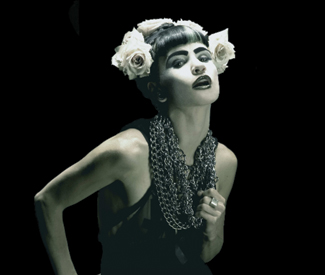 MUSIC A lot of elements needed to come together to inspire Metal Mother’s new record, Ionika. You can almost picture the woman behind the sobriquet, crouching in some foggy wooded wonderland, scooping up soil and critters, ancient buried treasures of forgotten societies and precious metals. Before we get into specifics, let’s slip off the mask. Metal Mother is really, mostly, the glossy coating of one delicate Oakland musician: Taara Tati.

In between the release and subsequent tour after her first album, 2011’s Bonfire Diaries, and the making of Ionika, which comes out in a week on April 16, Tati collected experiences that affected her future output. She picked wisdom up from extensive travels, Pagan and Celtic traditions, tales of ancient warrior women, and Sufjan Steven’s ’10 album The Age of Adz (which she listened to while exploring Europe for a month). Add to that Game of Thrones, the city of Oakland, the music of Son Lux, and all of Kate Bush. But the clearest running thread throughout Ionika is fascination with Druids.

“Getting into the whole ancient Celtic cultures thing, it was very matriarchal and tribal,” she says, sitting in her “incredibly cheap” Victorian in downtown Oakland. “It was a really profound lifestyle. The more I discover about that, the more I want to learn about it, to be able to see that history and sort of represent that in a way, or glean some power from that.”

She references the culture’s interest in psychoactive medicines, and Queen Boudica, a Joan of Arc-like figure of a British Iceni tribe who led an uprising against the Roman Empire.

“I really came into a full-on obsession last year when I was traveling in Europe. I went on this full journey to all these different ancient sites and sacred sites, and it was empowering for me to be there, and to feel the history of that land, and… my ancestors.”

Her lifelong inspirations, however, seem to have sprung from competing worlds; darkness and light, the electronic and the natural, woman and machine. And all those influences, all those cosmic connections are poured chaotically into Ionika, a densely layered, moody, and deeply spiritual release of 11 solid tracks.

The key track is first single “Prism,” a stunning Grimes-ish (if Grimes were a bit more wild) song with Tati’s many vocal tracks delicately laced throughout twitchy beats and drums. Equally breathy is “Prism”‘s sonic twin “Tactillium.” Some tracks waver questionably — “Windexx’d” kicks off with a harrowing grind and ghostly howl — while others sound as if they were ripped directly from her innards. The epic “Little Ghost” (clocking in at 7 minutes and 29 seconds) begins lightly with Tati’s crisp, otherworldly soprano vocals and a few click-click-clicks of the machines, then builds into an Enya-esque soundscape, with gently pulsating electronic drum hits.

Much of Ionika’s form and sensibility came from David Earl, an Oakland producer and sound engineer whom Tati met through friends. A multi-instrumentalist, Tati would write the songs’ skeletons alone in her Victorian — along with the vocals, and most of the melodies — then bring them to Earl and the two of them would pile on those folded ribbons of sound, with Earl adding crucial rhythms with beats and additional backing tracks.

“It was kind of insane, we had so many crazy, creative whims we went with. We didn’t really delete as much as I thought we were going to delete in the end, you know? We just went for it.”

“He took everything and put it on digital steroids, basically,” she says.

Tati was raised “literally in the woods in Northern California,” in tiny Occidental, Calif. (population: 1,115) in Sonoma County, just west of Santa Rosa.

“I was left to entertain myself with the birds and insects and the critters out there. I have a huge love for the elemental part of the world, and also tribal rhythms and acoustic music and basic sounds forms in that way.”

These influences are clear in the earthly, rich melodies and rhythms of Metal Mother. The other half to her whole came when she began exploring rave culture in the ’90s. This is where she discovered electronic music.

It took both of these elements — the lush forest hangouts and the eye-opening rave nights to create the Metal Mother sound and aesthetic.

“It’s not super planned out, but those are just my preferences,” Tati says.

And yet, from the beginning, Tati has been almost entirely in control of her sound and career. While she’s picked up local musicians along the way, in particular to play as her backing band at live shows, and of course, Earl was a huge part of Ionika, she’s been the only constant of Metal Mother.

“I made every creative choice around the album,” she says. “I’m trying to really preserve my own sense of spirituality within putting out an image of myself around my music, to the world, outside of my own personal circle. That’s a huge part of who I am on a daily basis. I love herbs, rituals, and everything witchy, and I don’t want to have to tone that side down.” She laughs, a warm, frequent, occasionally nervous-sounding giggle.

After spending her early 20s in the street performance and renegade guerrilla performance art scene — mostly as part of the North Bay Art and Revolution, and a renegade little troupe called Action Creature Theatre — Tati unexpectedly shifted focus to music. She’d always dabbled in keyboards, but had never taken playing too seriously. And she’d all along been crafting poems and songs of her own. (Her mother was a theater director, which might explain the affinity for all things artistic expression.)

After friends discovered her “funny, quirky little keyboard songs,” they convinced her to play live, which she did and then quickly found her calling. “I’ve just been following all the open doors, that’s kind of how I operate my life. It’s just like, [going] where the doors are opening. And the doors started opening with music, rapidly, so I just went that direction.”

She named her new project Metal Mother, after the elemental fierceness of a mother and also a planet.

“I was just kind of wanting it to be like, maternal and loving and nurturing obviously, because I like to make pretty music and feel euphoric, but also that kind of fierceness because yeah, the world is a crazy place,” she says. “You’ve got to have that strength to endure some of the crude realities we’re faced with.” Those realities seem clearer when she describes looking out her bedroom window, to the poverty she’s faced with daily outside her doorstep, the homeless people huddled across the street, the loud chaos of the city whizzing by.

The name “Metal Mother” itself came from Joseph Campbell’s book, The Hero With a Thousand Faces, in which he talks of an ancient Chinese myth about the marriage of the Metal Mother and the Wood Prince — and that’s what brought lightness and darkness together, creating the human race.

It took most critics a minute to figure out that Metal Mother was not, in fact, a metal act.

Tati was on the cover of Performer Magazine, and featured in the Guardian’s first “On the Rise” batch of up-and-coming musicians last year, in which I wrote she was “some sort of neon, acid-drenched wood nymph.” (It works especially in the context of the video for “Shake,” viewing of which is highly suggested.)

Now, with the hardest part of Ionika over, Tati is free to pursue her next big project — Post Primal, a kind of loosely defined record label and collective she’s working to put together. Ionika is the label’s first release, and the only other band so far officially involved is Mortar and Pestle. But Tati has big plans for the near-future, boosted by others acts approaching her to express interest in Post Primal. Though, she admits, they’re still in the process of defining just what it will be.

“The whole goal is really to have a platform for more context for all of us to associate ourselves with. It’s also more of a collective, because I don’t really have a ton of money or anything to put out anybody else’s record, it’s just basically like we’re sharing resources, we’re sharing contacts and exposure.”

She also is hoping to find a warehouse space in Oakland to put on interactive collective showcases, and create a hub, a new music community in the heart of the adopted city she’s clearly still enamored of, more than six years after moving here. “I love Oakland so much. I’ve gone to a lot of other cities and checked out a lot of other scenes, but I always come home like, this is where I need to be, and this is where I want to grow.”