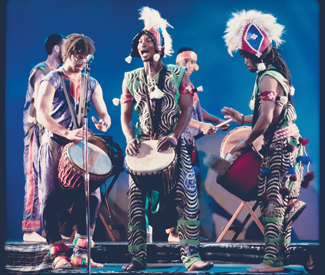 DANCE “Next door,” you are told in the packed Senegalese restaurant in the heart of the Mission. “Back there,” you hear, as a hand points in a very dark, very empty bar you enter through an unmarked door. What’s “back there”? It’s a large space, perhaps formerly used for storage, lit by blinking Christmas tree lights and two blinding spots. You wonder what a former African dictator would have thought about a celebration of his life being created in such circumstances. But then why would anybody want to pay tribute to a man who was responsible for the death of thousands of his fellow citizens?

The head of state in question is Sékou Touré, nicknamed “Syli” or “the Elephant,” who led Guinea to independence and in 1958 became the country’s first president. On the night I visit its practice space, Duniya Dance and Drum Company is working on piece about Touré, The Madness of the Elephant, which will world-premiere this weekend.

But Sidibe also knows all about Touré’s darker side. “He was a Marxist and he did not tolerate dissent,” he explains. “But he also was a good man, a revolutionary and a man with a vision. His madness was both good and bad. He was the first president of my country. He gave hope to the people; he supported and built our culture. I would not be here as a dancer and as a musician if it was not for him.”

But Touré’s major act of “madness” came with independence when, says Sidibe, “he was the first guy in the world who dared to say ‘no’ to Charles de Gaulle,” rejecting Francophone post-colonial attempts to shape and control the country.

It’s with that crucial moment in Guinea’s history that Madness opens. It recalls the speech in which Touré declared Guineans would rather live poor but free than rich and enslaved. The rehearsing crowd leaps, cheers, and embraces each other to the drummers playing the national rhythm created for that historic occasion.

It’s a curious group. Four of the dancers are Africans with professional performance experience, but for the other eight the African rhythms and steps are clearly foreign. Yet they embody them well.

When these dancers auditioned for Duniya’s artistic director, Joti Singh, they thought they were enrolling in Bhangra, a folkloric dance from North East India. “I told them right away that we might also do African dance,” the American-born Sing, who’s of Punjabi descent, explains. As a child Singh learned to perform Bhangra at family celebrations and cultural festival, but she lost interest as she got older.

In college, she discovered West African dance and became passionate about it. She has twice traveled to and studied in Africa, speaks some Sousou — “I can understand much better than I can speak it” — and finds herself very comfortable in both worlds. Evidently, her dancers feel the same way “Everyone is welcome,” smiles Sidibe at a question surrounding possible cultural conflicts.

In another scene, rehearsed between much teasing and laughter, a group of what looked like women in an open-air market is attacked by baton-twirling thugs. They stand up to the men. The incident, explains Sidibe, was based on fact. “Touré created a special police to enforce Marxist economic principles. But one day the women marched to the Presidential Palace singing and chanting their objections. He abolished the force the same day.”

As is wont in much of West African culture, a djeli (a storyteller), accompanied by the balafon (a wooden xylophone) will provide the through line for Madness‘ musical, dramatic, and choreographed sequences. Sighs Singh, “That has been the hardest part of this project — trying to hold all these wonderful artists together in one place.”

“THE MADNESS OF THE ELEPHANT”