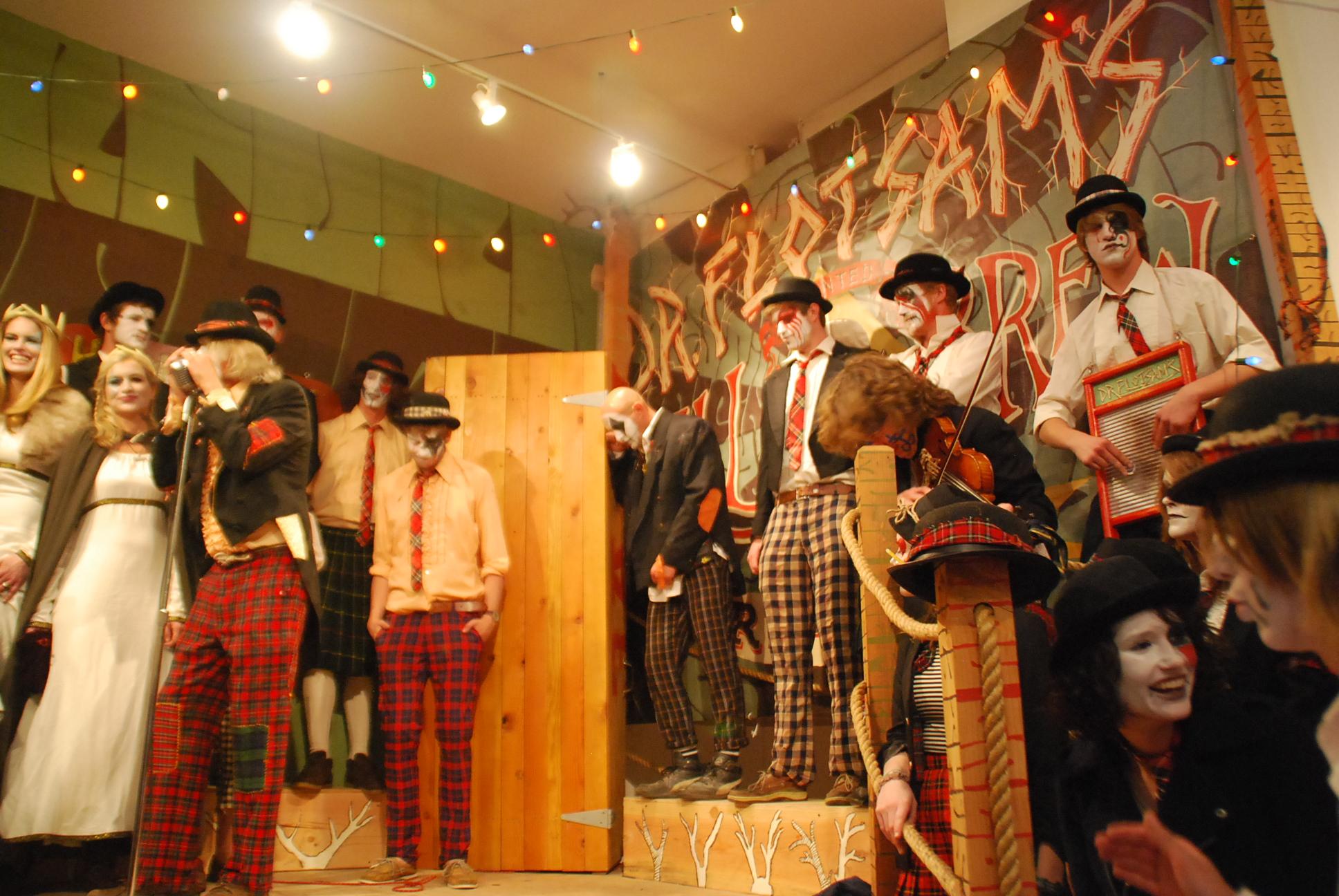 A promise that all our ailments will disappear and our wildest dreams will come true … for a small price. Or for the price of your soul? Dr. Flotsam and his self-described “crew of carny bastards,” sprung from the wild mind of San Francisco artist Mike Shine, ask us the worth of that exchange. The question is scattered through the paintings, performance, and graphic novel of his show, “Flotsam’s Harvest,” up now through April 6 at White Walls.

According to the show’s press release:

“‘Flotsam’s Harvest’ will be a sweeping installation of street art, paintings, films, a medicine show performance and the launching of Shine’s graphic novella. Each aspect of the show will provide different coded tips and hints, offered to help viewers solve the dark ‘World Riddle’ posed by Friedrich Nietzsche in his book, Thus Spake Zarathustra.”

Intrigued? The opening at White Walls Sat/16 had enough stimulation to dissolve even the hardest anti-consumerist into clapping, grinning, and Irish drinking-song singing. But the mystical “Hell Brew” the medicine show promoted wasn’t for sale. Whether it was ploy to sell the art or vice versa is still up for debate.

Shine’s devilish paintings of animals and figures fuse illustration and graffiti styles. Their rustic colors are blockish and thickly lined like cartoons, while the dripping paint, stray marks, collaged tickets, and spray paint give an urban art feel. These hip but simple paintings are enhanced by frames carved with animal figures and hung on walls painted with radiating text that’s as inscrutable as gang tags. Similar murals are also painted around in the city with Banksy-esque portraits of the “carny bastards.” But despite how cool they are, the artworks were not the selling point for me.

Shine’s opening night performance (similar to those he has done at Outside Lands and SFMOMA), was equally as rich and cryptic. It began in some form of Gaelic or Old English with subtitles on cards and continued with Dr. Flotsam selling his mystical tonic in a thick, comical accent. We all knew the audience volunteer selected to test the brew was a plant (in the form of YouTube dance star takesomecrime): he hobbled on stage but was “cured” after swigging from Dr. Flotsam’s flask, and began shuffling to electro swing by Skewiff.

This wildly entertaining evening can’t be isolated as the meat of what Shine has made either, but it began to make sense of what was going on. The sense of irony was ripe when Dr. Flotsam noted that the government doesn’t permit medicine shows because they “lie to you.” (This sense of danger in the promise was deepened in his disclaimer that you can have your widest dreams come true, if you’re willing to part with your soul.)

A similar theme emerges in the accompanying graphic novel, in which Dr. Flotsam intervenes in the lives of people who have notably impacted history, like the caveman who made fire, Jesus, or the inventor of penicillin. But each one pays a heavy price for the advice they receive. The conflation of good and bad creates a wild sense of anarchy which gives reason for, and holds the key to, the intense and scattered information Shine draws upon for his work.

In a culture where added dimension in art and immersive stimulation in film are often confused with creative quality, Shine has created a show which uses both to convey his meaning. But after the whole experience puzzling out the riddle, I was left wanting. The entertaining trail of information ended in a simple answer, but opened up a number of new questions: was it about merging the body and soul by processing his art in order to gain a stronger sense of identity? Or about how commodities are sold with flair and gusto, but in their mass production fail to truly appeal to the individual? Or is Shine just trying to fuck with people? Maybe you should take a look at the riddle and figure it out for yourself.