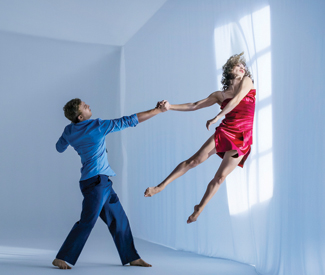 
DANCE ODC/Dance started its 42nd season with a party-happy gala and two contrasting but complementary works: Brenda Way’s new Lifesaving Maneuvers and KT Nelson’s redressed and finessed 2012 Transit: Next Stop. Two days later, the season’s major premiere, Triangulating Euclid, co-choreographed by Way, Nelson, and Kate Weare, opened an intriguing perspective on what gifted women can do when they put their heads and hearts together. Of course, women working together is not exactly a fresh idea at ODC — it’s at the core of what this troupe set out to do four decades ago.


Though the dark Lifesaving has its moments of humor, Way’s look at wild excesses and paralyzing paranoia, both as social and personal phenomena, is a tough watch. The piece develops in front of Alexander Nichols’ semi-transparent curtain that closes off some ominous, hinted-at life beyond our vision.


While the sheer clarity and force of its choreographic vision pulls you in, Way’s unsparing look on coping strategies is chilling. Chaotic explosions could distill into social dance sequences where a partner, nonetheless, could be dropped like a rock. Yayoi Kambara looked caught in a tornado from which there seemed to be no exit, while Anne Zivolich darted around like a hunted rabbit.


Way grounds the choreography in an intense, often frantic energy that implodes mid-air. She balances discontinuity with unity processions, starting with battlefield imagery of dancers carrying off fallen comrades, women being pushed into the wings like brooms and vacuously waving men and women that might have stepped out of a Pina Bausch piece.


Still, Way doesn’t want us to feel too gloomy. You can’t help but smile when dancers choke and need Heimlich maneuvers as "Mad About the Boy" plays. In a silent movie melodrama, Natasha Adorlee Johnson throws herself at Corey Brady’s suave villain; he coolly assesses his victim and flips her off.


The piece ends with Justin Andrews cradling a desperately flailing Vanessa Thiessen. He tries to comfort her; she can’t respond. Curtain.


Whatever the process that the three collaborators engaged in for Triangulating, it worked. At first the piece looks like an illustration of basic plane geometry, but it quickly blossoms into an exuberant celebration of the way dancers inscribe themselves into space. From the moment a dancer’s leg smudges the carefully drawn line on the floor, you realize that poetry supersedes science.


The half-hour piece sails through its accumulations and dissolutions of staggered and overlapping encounters with surety and an increasing sense of freedom. The piece grows and finishes with Yayoi Kambara as the single dancer who draws the others onto the stage. Line formations give way to duets — still at the core of how and why we dance. Wonderfully, the cantilevered lifts, upside-down holds, and kicking feet feel thoroughly at home in Schubert’s music. The partnering between Corey Brady and Maggie Stack, contentious and passionate in the way he throws and whips her around, stands out.


Finally, Anne Zivolich sniffs, tiptoes, and encircles an indifferent Jeremy Smith; she breaks into one of her by-now-legendary whiplashing explosions when he takes off with someone else. One by one her colleagues march in and try to stomp her to the ground. The scene was both hilarious and spoke to truth: surely there is more to this dancer than being a female hurricane —something she appears as in just about every choreography that ODC produces.


The simple costumes (by Way and Lisa Claybaugh) of black shorts and bras for the women, and then supplemented by diaphanous white blouses, couldn’t be better. The score’s trajectory from synthesizer to Schubert to grand-style minimalism did its job as well.


Nelson’s Transit: Next Stop has acquired a spectacular set of animations which contextualize her urban dwellers’ attempts to manage their relationships. Yet Barry Steele’s design is so big that it draws undue attention to itself. It works best during a night scene in which life becomes a dream. But I am not sure whether adding a filmic sense of passing and changing habitats brings that much to this funny-yet-tender perspective on what it means to be a contemporary city dweller. *