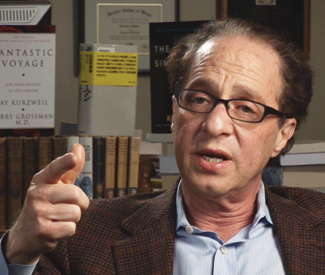 FILM Anytime you start taking about a robot uprising, people are going to listen — even if you mean it in a theoretical sense, not in a Cyberdyne Systems sense. Local filmmaker Doug Wolens (he made 2000’s Butterfly, about activist Julia Hill) tackles artificial intelligence, nanotechnology, conscious machines, and, yes, science fiction in his new doc The Singularity. I spoke with him recently about all of the above.

San Francisco Bay Guardian What is the singularity?

Doug Wolens There are a lot of different definitions. To me, it’s the point in time when computers become smarter than people. And that’s a loaded term, smarter; computers do things quicker than we can do now, so in some sense they are already smarter. But the point I get to in the film is that smart isn’t just being able to calculate things. It’s being able to be in the world. In order for computers to be smarter than us, they have to be aware, be conscious. And that’s a long way off.

SFBG What challenges did you face in making a documentary about an abstract concept?

DW I’ve been able to make my last couple of films because of grants. So I went to some grantors and said, “Hey, I want to make this film about the singularity!” And people laughed at me and said, “You can’t make a documentary about science fiction.” So I just decided to go out and start shooting interviews.

Certainly I did my homework beforehand, but I was also learning as I was doing the interviews. As I did that, I started to get an idea of how I would approach putting it together. That was the hard part — creating a story that’s interesting. I am a storyteller and I want to engage people.

SFBG The film’s main character is Ray Kurzweil, author of The Singularity is Near. Why is he important to the story?

DW Ray Kurzweil is an interesting guy. He’s a super-genius. He’s an inventor, but he invents things thinking, “What’s the technology going to be in five years?” He extrapolates, and his extrapolations allowed him to say, “In 2029, there’s going to be enough computations per second that will mimic the human brain, so we’ll have something like human intelligence in a computer.”

However, he misses some part of what it’s like to be human — it’s just the calculations he looks at. But I don’t want to pooh-pooh him because he’s done so much for science and technology. And we’re all just human. He’s not a perfect person.

SFBG The film is comprised of interviews with scientists, scholars, and other experts. How did you decide who to talk to?

DW When I first started, there were only a handful of people involved in this type of forward-thinking community. There was Ray, and a couple of people at the Singularity Institute, which used to be down in Mountain View, doing artificial intelligence theory and thinking about how to protect us from these machines if they ever became sentient and wanted to take over the world.

But then I wanted to broaden the film to make it beyond an AI film for AI geeks. So I started to think about the ramifications of some of these technologies, and that’s where I started to go into government policy with Leon Panetta and Richard A. Clarke. I realized there’s so much more to being intelligent than just computation, and I found this conference in Arizona called “Toward a Science of Consciousness.” I met with a number of people who were talking about what it means to be conscious. That was an awesome path to go down, because it was in line with my thinking of, “What is it that makes us human, and how are we different from machines?”

SFBG Who do you see as the audience for this film?

DW My audience is people who are thinking about the world. I want to believe that everybody thinks about their place in the world, and what’s good, and what’s bad, and what’s important — not that we have the answers, but we at least think about it. It’s a smart film and it requires a lot of attention from the viewer, and not everybody can do that.

I want it to be for the next generations. I know that sounds really hokey, but I was born in 1959, and I was a young kid in the 1960s when we were going to the moon. I was so in awe of science. I really want to get people excited about science and technology. Sure, gadgets are cool, but where science can lead us, and the things that it can do for us, are amazing.

For younger generations who are on Facebook and Twitter all day, to see how the technology has come to where it is, where it will go, and how it’s part of their lives — I really want this to be for them.

The Singularity is available for purchase on iTunes and at www.thesingularityfilm.com. Check out the trailer here!