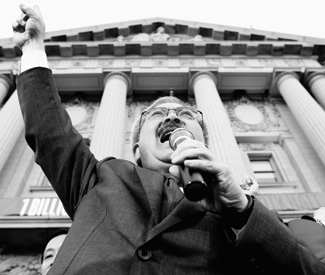 When Mayor Ed Lee came to the Board of Supervisors for his monthly “question time” appearance Feb. 12, Sup. David Chiu tried to get some sense of where the mayor stood on a controversial piece of legislation that would allow more condominium conversions.

Chiu explained the complexities and implications of an issue where the two sides have dug in and appear to have little common ground, and he asked the mayor for some guidance.

“What is your position on this pending legislation?” he asked. “What protections would you support to prevent the loss of rent-controlled housing in our increasingly unaffordable city? How would you address the concern that if we allow the current generation of tenancy in common owners to convert, we will replace then with a new generation of TIC owners and additional real estate investments that will lead us right back to an identical debate within a short time?”

But if Chiu and other board members were looking for leadership, direction or a clue of where the mayor might stand, they didn’t get it. Lee said he understood both sides of the issue and hoped they could reach a consensus solution — without offering any hints what they might look like or how to achieve it. “I can’t say that I have a magic solution to this issue that will make everyone happy,” the city’s chief executive explained.

Asked by the Guardian afterward why he didn’t take a position and whether he might be more specific about how he’d like to see this conflict resolved, he replied, “I actually did take a position, even though it didn’t sound like it, because I actually believe they have good points on both sides.”

That’s a typical answer for a mayor who rose to power preaching the virtues of civility and compromise and striving to replace political conflict with consensus. But now several major, seemingly intractable issues are facing the city — and insiders say Lee’s refusal to take a strong stand is undermining any chance for successful.

The lack of mayoral leadership has been maddening to both sides involved in the negotiations over the condo-conversion legislation. Tenant advocates say the mayor’s waffling hardened the positions on both sides and emboldened the group Plan C and its allies in the real estate industry to reject the compromises offered by supervisors and tenant advocates.

“It’s very unhelpful,” San Francisco Tenants Union head Ted Gullicksen said of Lee’s refusal to take a stand. “Someone needs to kick the realtors in the butt, and that’s not happening. They have no impetus at all to compromise.”

Then there’s the case of California Pacific Medical Center’s proposed new hospital, a billion-dollar project that would transform the Cathedral Hill neighborhood and have lasting impacts on health care in San Francisco.

The mayor’s eagerness to get the deal done — even if it wasn’t the best deal for the city — led to a proposal that fell apart last year under scrutiny by the Board of Supervisors. That project has now been in mediation for months — and sources tell us they’re getting close to a deal that has little resemblance to the anything offered by the Mayor’s Office.

California Nurses Association Director of Public Policy Michael Lighty, who has been involved with the CPMC negotiations, said Lee’s unwillingness to take a strong and clear stand, or to help mediate the dispute once the deal blew up, is why this negotiation has been so difficult and protracted.

“If he had engaged stakeholders and the supervisors, we wouldn’t have had to go to the brink last summer,” he said. “You’ve got to have clear objectives and be willing to fight for those, and that means saying no…If you’re willing to accept any deal and just put political spin on it, this is what you get.”

Neither Lighty nor others involved in the CPMC negotiations would discuss details of the pending deal, as per the instructions of mediator Lou Giraudo. But they did talk to the Guardian about the political shortcomings that led to such a protracted mediation process on a project that has been in the works for many years and involving a looming state deadline to replace the seismically unsafe St. Luke’s Hospital.

Lighty called Lee’s conciliatory approach to CPMC “an administrative orientation and not a political one,” noting that what worked during Lee’s long career as a city administrator may not be working well now that he’s in the Mayor’s Office dealing with issues where consensus isn’t always possible.

Lighty did say the negotiations were getting close to resolution. “What comes before the board is going to be vastly superior to what the mayor and CPMC proposed,” he said. “I think what you’ll find whenever this comes out is it will repudiate the mayor’s approach.”

He contrasted Lee’s style to that of his predecessor, Gavin Newsom, who took positions on most controversial issues and would often get involved with forcing his allies to cut deals. For example, shortly after taking office on 2004, Newsom demanded that his allies in the hospitality industry end their lockout of hotel workers, and when they refused he turned on them and even famously joined workers on the picket line, pressuring the hotels to soon end the lockout.

“Why did you need to bring in an outside mediator for CPMC? Why didn’t the mayor do that?” Lighty asked, noting that Lee has stayed away from the current negotiations.

Ken Rich from the Mayor’s Office of Economic and Workforce Development has been in those meetings but didn’t return our call. Mayoral Press Secretary Christine Falvey has also ignored repeated messages seeking comment on the issues raised in this story.

Rudy Nothenberg, who negotiated big deals on behalf of five successive mayors before Lee and who has been critical of the Warriors Arena deal that the Mayor’s Office has negotiated, said Lee’s unwillingness to take strong stands with developers is hurting the city.

“I was able to say I’m going to get the best deal I can for the city,” Nothenberg told us, saying he approached all negotiations, including the construction of AT&T Park, with the understanding from the mayors he worked for that he could simply say no to bad deals. “You need to bargain for the city as if these guys walked away, well, then that’s okay too.”

Sup. David Campos, who has been trying to get CPMC to strengthen its commitment to keeping St. Luke’s open as a full-service hospital, agreed that, “There have to be times when you’re willing to say no.” And on the CPMC project, Campos said that fell to the supervisors when the Mayor’s Office wasn’t willing to. “It was clear that the board was not going to approve it,” Campos said, “and sometimes you have to do that to get to a result you can live with,”

UCSF Political Science Professor Corey Cook said the problem is less with Lee’s overall philosophy than with what is strategically smart on individual issues.

“The mayor’s strength is in trying to come up with consensus measures,” Cook told us, calling the approach “generally a good one” and saying “the decider isn’t always who you want, then you get George W. [Bush].” Yet Cook also said intractable problems like the condo conversion debate may require a different approach. “Sometimes you do need to stake out clear ground to limit the terms of the debate.”

Chiu has at least been willing to put his energies behind his belief in compromise, taking an active role in the CPMC and condo negotiations, as well as complicated current negotiations involving how to legalize but limit Airbnb’s shared housing business in San Francisco, which involves landlord-tenant-neighbor dynamics, regulation of private leases, and complex land use and taxation issues.

“It’s been a very long month. I’ve been going around the clock on several challenging negotiations,” Chiu told the Guardian. “The most important things to work on are often the ones that are the most difficult to get done.”

Chiu was reluctant to discuss the negotiations, calling it a sensitive moment for each of them. But he did admit that he was disappointed in Lee’s non-answer to his publicly posed question. “I had hoped for a little more direction,” Chiu said. And while these negotiations haven’t shaken his faith in compromise, he did say, “It depends on the substance of the issue whether there are common ground solutions that are superior to two warring sides.”

But all involved in the condo debate say it appears we’ll be stuck with the latter. “The two sides are so far apart that I don’t know what a compromise that both sides would live with would even look like,” Campos said. “There are certain issues where I don’t think compromise or consensus is possible.”

On this one, tenant advocates are trying to protect a finite supply of rent-controlled housing and real estate interests want to convert that same housing into condos. “If the issue was just existing TIC owners, we would come to an agreement,” Gullicksen said. “But clearly the agenda of Plan C and the realtors is they just want more condos.”

Plan C board member Kat Anderson told us, “I have a simple approach to this: Home ownership is important to me.”

She was undeterred by arguments that thousands of new condos are now being built in San Francisco, but there’s a steadily dwindling number of rent-controlled apartments in a city where two-thirds of San Franciscans are renters.

Anderson made it clear that she wants to not only allow the backlog of condo applicants to be approved, but she doesn’t want to slow the flow of condo conversions for a few years thereafter or place TICs themselves under the cap, compromises offered by Gullicksen. “The worry is that if you change the system, it will never come back and we’ll lose our tiny toehold of 200 units [that the lottery allows to be converted to condos annually],” Anderson said. And so we end up with the very thing Lee sought to avoid: a big, nasty, divisive public fight that will probably end up being decided by big money and deceptive campaign mailers rather than a civil, deliberative political process. And the mayor has nobody to blame but himself.