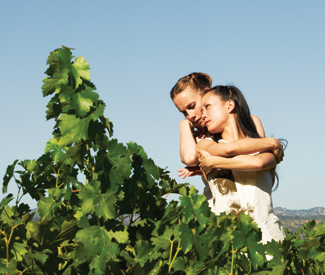 DANCE Unlike more commercially competitive markets, the Bay Area is, fortunately, still a place where young choreographers have the freedom to grow. This past weekend, two who are primarily known for dancing other people’s works showed their own promising premieres.

Katharine Hawthorne graduated from college with degrees in physics and dance. On February 22, its opening night at the Joe Goode Annex, you could not possibly miss Analog’s dual pedigree. This startlingly intense quintet opened on the quietest of notes but built its trajectory like a smoldering volcano that finally erupted into a threatening destructive force.

Looking at movement through a scientist’s lens, in conjunction with knowing it to be the dancer’s basic tool, allowed Hawthorne — and her fearlessly athletic dancers — to offer a fascinating perspective on how art and science can elegantly coexist with each other. However, why the dancers repeatedly lugged around an overhead project (and barely used it) remains a mystery.

A 19th century illustration of a mechanical hand, against which Katherine Disenhof wiggled her fingers, set the tone. Those tiny live gestures led other dancers (Hawthorne, Jesse Chin, Luke Taylor, and Megan Wright) to use their arms in almost machine-like ways, as if to demonstrate speed, direction, level, and space. Movements changed with sharp angles, trajectories were linear, and collisions avoided. Dancers also looked like planets circling a sun. Chin and Taylor repeatedly repulsed each other like two positively charged particles. Wright found herself in a whirling circle — a tornado about to take off.

But more and more the movements’ relentless and increasing intensity began to look like threats to the dancers’ well being. Several times I thought Chin was about to collapse though touches and handholds seemed to suggest temporary respite. Yet Analog resembled a nightmarish perpetuum mobile until finally the clock began to slow everything down. We were left with darkness descending on the two dancers left. I couldn’t decide whether that meant peace or the ultimate catastrophe.

As a performer, Tanya Bello brings a ferocious appetite for space, soaring elevations, and dizzying spins to her dancing. So it was almost expected that as a young choreographer she brought many of these characteristics to GamesWePlay(ed), which premiered at the ODC Dance Commons this past weekend. The half-hour piece is a nicely calibrated essay on play as both an innocent activity but also as a means to manipulate those around us. Bello wisely engaged dancers from top local companies: Vilte Bacinskaite, Tristan Ching Hartmann, Kelly Del Rosario, Norma Fong, Chin-chin Hsu, Mei-ling Murray, and Katherine Wells. The work also greatly benefited from Judy Hansen’s costumes, which were elegant, tiny dresses with just a wisp of a tutu suggestion.

GamesWePlay(ed) consisted of a number of distinct episodes which included versions of tag, races, imitation, and mirroring activities, but also pure dance sections. Some looked highly structured only to explode; others involved repeated and fast partner changes. Woven wicker balls were passed around but also hung onto. When Del Rosario curled up on the floor, a tiptoeing Wells gently sent him back into the fracas. I couldn’t help but wonder whether there was a joke here since as the ensemble’s only male, Del Rosario had to do all of the heavy lifts.

Though the work was not particularly fresh in terms of the vocabulary used, Bello showed an already impressive control in the way she used the dancers on stage. The choreography — from solos to septets — flowed and dissolved with almost filmic quality. A mirroring duet opened up into a group, loosing its architecture but gaining breath. Two dancers approaching each other from opposite corners became a double duet. But the piece also had its moments of (ballet?) humor when Fong released a quartet of shadowing women from their monotonous tasks. At another point dancers flopped over received a magic touch to blossom again like those eternal flowers in the Nutcracker.

Towards the end Bello went back to material used earlier in the piece. Was that just to lead up to a finale? There must be better ways to end a show.

Performing on the same program was Karen Reedy Dance from Washington, D.C. Reedy’s Sleepwalking (2008) was a beautifully danced septet, a work that gently yet penetratingly considered what makes us panic and silently scream at night.