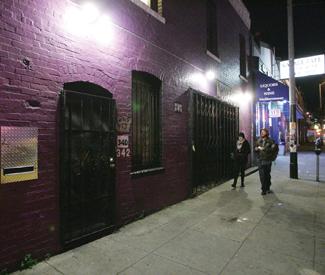 The fate of the “purple building” – which has become caught up in the clash between nightlife and residential interests on the clubgoer-saturated 300-block of 11th Street – remains undecided as the Western SoMa Community Plan heads into its first hearing before the Board of Supervisors Land Use and Economic Development Committee on Monday.

As we reported in this week’s paper, a unique citizen-based task force has spent the last eight years developing the plan, which will allow thousands of units of new housing – most of it along Folsom Street – to move forward once the plan gets final approval from the board. But the California Music & Culture Association and other nightlife advocates successfully amended the plan to ban new housing on that 11th Street block as the Planning Commission approved it in December.

Yet the commission also decided to grandfather in a 24-home project at 340 11th Street, the so-called purple building, which nightlife advocates say would put those new residents on a collision course with Slim’s, DNA Lounge, and other big nightclubs on that busy block. As we went to press, both sides and District 6 Sup. Jane Kim were all hopeful that a compromise was imminent, likely involving switching from residential to office.

But with just days to go before that hearing, building owner Tony Lo still hasn’t decided whether to make the change or fight it out in front of the supervisors. His architect John Goldman – whose residential design for the site was placed on hold by the city since shortly after he submitted it in 2005 – had hoped to hear by now but he’s still waiting for Lo to make the call.

“Based on my analysis, it looks feasible to change to offices if you want to do it, and I mean feasible financially and architecturally and planning-wise,” Goldman today told the Guardian, referring to what he told Lo.

Meanwhile, Western SoMa Task Force Chair Jim Meko – who has not been supportive of tweaking the plan after all the work he oversaw – yesterday sent out an email blast to stakeholders and supporters urging them to attend Monday’s hearing and show support for the plan.

“You don’t often get a chance to participate in making decisions about your own neighborhood from start to finish. Some special interest groups are expected to come out of the woodwork to take pot shots at the Plan so the hundreds of participants in this process need to make their voices heard. Your testimony at the hearing next week will make all the difference,” Meko wrote.

The hearing starts at 10am in board chambers in City Hall. This item might have been heard later in the day considering the agenda opens with a continuation of the controversial condo lottery bypass legislation, on which Board President David Chiu and others have been trying to forge a compromise between tenant advocates and homeowner groups. But committee Chair Scott Wiener just told us that item “will be continued. No compromise yet.”