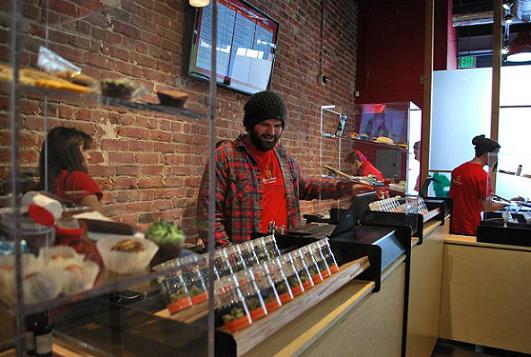 Today was the grand opening for a new dispensary just steps from the front door of Mezzanine and right down the block from a rapidly-changing Sixth Street. Long-time medical marijuana patients may recognize some familiar faces — Bloom Room employs many of the staff and management from Medithrive, the Mission Street dispensary was was forced to close “for the children” back in November of 2011.

“I was the manager of a store, and then I was the manager of a delivery service,” Bloom Room manager Stephen Rechit tells me, sitting in the dispensary vaporizing lounge area. When federal government agencies informed the cannabis club that it was too close to Marshall Elementary School, Medithrive switched to a $50-minimum, delivery-only service that owners continue to operate.

The Bloom Room’s open for business, with space for on-site vaporizing steps from the cash register

Did Rechit — who says he became Medithrive’s first employee as a new University of San Francisco graduate — consider a career change in the face of unyielding federal agents? Not for a second.

“I know this is definitely what I want to do,” he reflects. “I just really — I don’t want to get cheesy, but I believe in the plant.”

>>THROUGH MARCH 1, NEW BLOOM ROOM PATIENTS GET A SAMPLER OF THREE MARIJUANA STRAINS WITH ANY PURCHASE OF $50

Bloom Room’s downtown design, with its exposed brick walls and translucent glass marijuana leaf panels reappropriated from the defunct Medithrive storefront, may be the perfect fit for a Sixth Street neighborhood that’s on a definite upward economic swing. Rechit points out the window to the corporate offices of Burning Man, perched atop a skyscraper alongside the rest of the Mid-Market buildings that tech tenants are filling up. Burning Man’s been an earlier contributor to Bloom Room’s “Community Corner,” a space for neighborhood fliers, business cards.

“TerpX is like the Girl Scout Cookies of last year,” Rechit comments, unrolling a piece of waxed paper so I can check out the golden goo.

As we chatted, Tenderloin resident Jim Murray (who, happily, bore a striking resemblance to Bill Murray in The Life Aquatic in his navy beanie) pulled up in the narrow, tall table to inquire about the availability of the clould of OG Kush pumping into the vaporizer bag between Rechit and I.

I’d seen Murray complaining about the quality of Bloom Room bud he’d picked up previously, and now he was interested in the “toast,” the spent flower already used in the vaporizer that was sitting on a piece of paper in the ashtray.

“The reason why I’m sensitive to this is because I am a senior living on a VA pension,” he informed me. “What compassionate care programs do you have here?” he asked Rechit.

FYI, Rechit says the dispensary gives away free product to patient on holidays and keeps prices low in general. Back when Medithrive’s doors were open at its Mission Street location it made monthly donations to the school around the corner that was eventually used as the excuse by the federal government to shut it down. Let’s hope Bloom Room has more luck in its new SoMa spot.