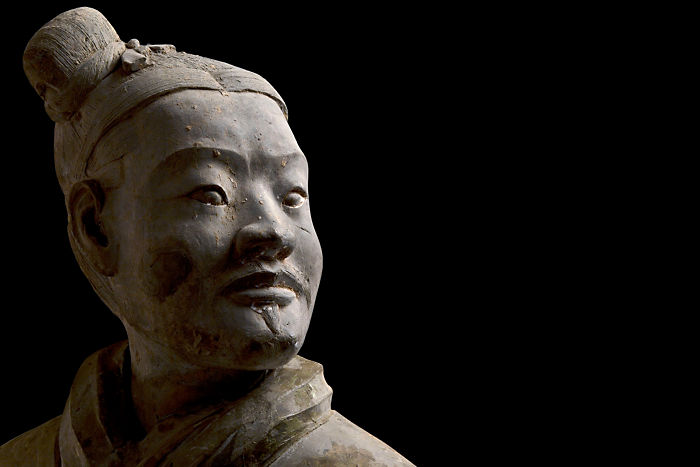 I’ve dreamt of traveling to Xi’an, China and witnessing the ancient army of buried terracotta warriors practically my whole life. The uncanny legions frozen in fired clay, each individual’s features uniquely fashioned, were discovered underground in 1974, a kinda creepy burial accompaniment of the first emperor Qin Shihuang (259-210 BCE), in a tomb complex the size of a city.

Now, some of those mesmerising warriors are coming to me, via the Asian Art Museum‘s “China’s Terracotta Warriors: The First Emperor’s Legacy” where a selection of life-size figures and related objects will be exhibited Feb 22-May 27.

In an inspired touch, the everyone-should-be-there opening party on Thu/21 will feature Cheryl, a surrealist disco performance quartet — think retro-future aerobics meets electro Warriors — from New York, as well as DJs Pink Lightning (Stay Gold), Nick, and Bay favorite Hokobo kicking out gritty jams. And, in fact, that staple of ’80s sci-fi playlist movie musts, Warriors, is providing the theme. Although with Cheryl, you never know where that theme is gonna go. Somewhere cosmically Warrior-y, I’m sure.

(I’ll be there of course, but I’m also gonna get to Xi’an someday — the food is supposed to be bonkers good.)

PS The Asian Art Museum has been doing these cute promotional spots from famous San Franciscans, looking for a lost terracotta warrior: