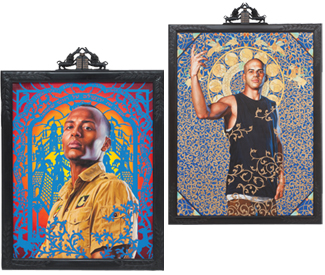 STREET SEEN I was going to write this column about what it was like to be art star Kehinde Wiley’s model. It was supposed to be an eloquent reflection on musedom, and I’d locked down a post-performance chat with Ethiopian Israeli rapper Kalkidan, who stars in several of Wiley’s portraits in the current show at the Contemporary Jewish Museum.

But you know what, Tel Aviv to San Francisco is a long flight and I’ll wager that if you followed up the same journey with two hip-hop sets in front of the opening night Contemporary Jewish Museum hoi polloi — whose hosted-bar pink cocktails gave birth to some very art-world dance moves — you would wind up much the same way Kalkidan did for our chat. Call it jet lag. Our interview veered towards monosyllabic, though I did manage to gather he’d seen the Wiley paintings in which he stars two times before, when the exhibition toured LA and New York. And that he’s an Aquarius.

… Leaving me to my own devices with you, dear reader. Well, not entirely. I did have a chance to ask Wiley about the direction he gives to his “painfully young and present models,” as he calls them, mere minutes after his flight touched down from New York. (Right before another journalist saw fit to ask him about Frank Ocean? Has a moratorium been decreed on talking to black queers, or anyone even tangentially related to hip-hop, about anything else?)

Insight into Wiley’s models seems central to his gorgeous “World Stage” series, for which he poses young men of color in classic historical poses, with ornate backgrounds and rarified postures mimicking 18th and 19th European portraiture, among other influences. The conceit started when the San Francisco Art Institute grad moved to New York, and he’s painted other chapters of “World Stage” starring men in India, Nigeria, Brazil, China, and elsewhere.

Coupled with his subjects’ vivid streetwear, which Wiley and his assistants (the artist is well-known for employing staff that contribute the pieces’ background, if not more) render faithfully, and region-specific background motif, the series is a gorgeous homage to modern brown and black manhood, with a swagger that is decidedly hip-hop.

“There is an aspect of black American creative culture that has become globalized. Every country finds their own response to this evolving reality,” reads a Wiley quote that greets visitors to the CJM exhibit. How has a culture that’s made its way everywhere still so vilified?

Wiley allowed to our group of arthounds at the preview that he does tend to capture men who are gorgeous — you won’t miss the fact once surrounded by his canvas gods — but that his choice has less to do with his own personal preferences. “You can’t know who’s zooming who,” he said. “Nor is it a particular interest of mine.” I overheard curator Karen Tsujimoto tell another reporter that she didn’t believe sexuality played a role in his work.

I guess I buy that. Wiley said that painting beautiful men is about highlighting factors rarely pulled out to the front in the art world. “Male beauty seems to be the elephant in the room when it comes to the history of painting,” he reflected.

I’d be wrong if I didn’t laserpoint out that drag (is that term adequate still?) babe boychild for bringing genderphucked Bay Area fierce to the runway for the Hood By Air-New York Fashion Week collection named, yeah, “boychild.” You know you’re the buzz when you’re overshadowing rapper A$AP Rocky, who also walked in the show. The look? Wetsuits and sportswear with glittering detail: canary yellow do-rags with blonde extensions, pearl-headphone earrings, French manicure. Strong, kinda freaky, hella pretty. Just like our child.