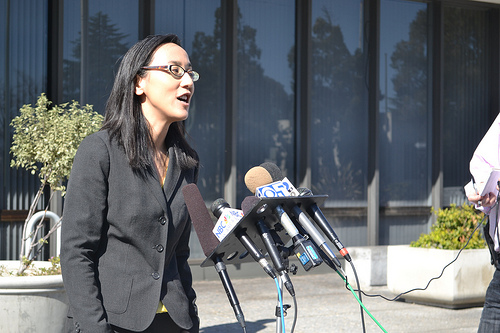 During what one official called the “show-and-tell” portion of a public hearing held yesterday by a committee of the Alameda County Board of Supervisors, a representative from the Sheriff’s Office held up a drone so the crowd of 100 or so attendees could have a look. The small, lightweight device consisted of a plastic box to house technical equipment, a camera, and four spidery legs affixed with tiny black propellers.

“It’s cuute!” someone exclaimed. But that was likely a sarcastic wisecrack – concerned citizens had packed the board chambers in hopes of convincing the two-person Public Protection Committee that the civil liberties implications of surveillance drones were too great to justify flying them over Oakland and other cities.

Last summer, Alameda County Sheriff Gregory Ahern submitted a Department of Homeland Security (DHS) grant request for an “unmanned aircraft system” (UAS), police-speak for drone. The agency intends to purchase one or two, depending on the manufacturer, for uses ranging from thermal imagery to crime detection.

The Sheriff now seeks supervisors’ approval, and is working to secure a Certificate of Authorization (COA) from the Federal Aviation Administration, required for aircraft flown at 400 feet. But the Sheriff’s plan has been met with strong resistance from civil liberties advocates worried that drones would open the gates to aerial surveillance and runaway data collection.

In turn, Sheriff representatives sought to defend its plan to use the devices, at one point practically asking critics to think of the children.

“We get several hundred calls a year for search and rescue, and deployment of our teams, to find lost children, lost hikers, or elderly persons,” Capt. Tom Madigan explained, and his co-presenter even referenced the case of famed kidnap victim Jaycee Dugard as a possible scenario where a drone could have been deployed. Commander Tom Wright assured supervisors that the drones would not be equipped with weapons, and stated that UAS devices would “not be used for indiscriminate mass surveillance.”

Yet the use of drones for surveillance and intelligence gathering lies at the heart of the controversy. “Data collected in the name of search and rescue could be retained for intelligence gathering and analysis,” ACLU staff attorney Linda Lye warned in comments delivered to the Public Protection Committee. “In conjunction with other existing policies, this would lead to the submission of UAS-collected data to the Northern California Regional Intelligence Center, also known as a ‘fusion center,’ where data – in some instances, about constitutionally protected activity –are stockpiled and analyzed in the name of so-called terrorism prevention.”

According to documents obtained by EFF and MuckRock News, the Sheriff’s Office indicated in its grant request that the unmanned aircraft could be used for “surveillance (investigative and tactical),” “intelligence gathering,” “suspicious persons” or “large crowd control disturbances,” the latter bringing to mind street clashes that flared up in downtown Oakland in 2011 when riot police sought to crush protests organized under the banner of Occupy Oakland.

Unlike helicopters, drones can gather high-resolution footage and other kinds of data without detection, transmitting live video feed to a command post for real-time viewing. While the Sheriff’s Department is eyeing drones that travel a quarter of a mile from base with a 25-minute flight time capacity, the technology is advancing quickly. It’s technically possible for drones to be equipped with facial recognition technology, radar, or license-plate readers.

Those growing capabilities are part of the reason civil liberties advocates are so focused on hammering out strong privacy safeguards. “We’re wading into uncharted waters here,” Lye cautioned, noting that any privacy safeguards established for these drones would apply to more advanced models down the line. “We have to bake in the privacy safeguards into this template.”

The Alameda County Board of Supervisors held off on approving a drone purchase by the Sheriff Department late last year when faced with controversy. It was originally included as an agenda item before any public meeting had been scheduled, but was later removed after civil liberties advocates intervened. At a December meeting, Undersheriff Richard Lucia told supervisors that including drone approval on the agenda had been “an oversight.”

If Alameda County obtains a drone, it will be the first California law enforcement agency to do so. Several other cities are proceeding cautiously: Last week, for example, Mayor Mike McGinn of Seattle canceled a drone program amid heated controversy.

Meanwhile, the Alameda County Sheriff’s Department is not the only Bay Area law enforcement agency eyeing unmanned aircraft devices. According to a document unearthed by an EFF and MuckRock News, the San Francisco Police Department (SFPD) submitted a $100,000 funding request to the Bay Area Urban Areas Security Initiative for a “remote pilot video camera,” basically a drone, that could be outfitted to “transmit real-time, geo-coded data to command centers.” The SFPD initially hoped to clear the FAA approval process by June of 2013, according to the document. However, its funding request was rejected. (It is unclear why San Francisco’s funding request for a drone was more than three times the funding request submitted by Alameda County.)

The grant request form notes that Lieutenant Thomas Feledy of the SFPD’s Homeland Security Unit sought funding for “the deployment of mobile compact video cameras in the visual and infrared spectrum … to provide live overhead views of critical infrastructure” in the event of a terrorist attack or natural disaster.

“It was rejected,” Officer Albie Esparza told the Guardian when we called SFPD media relations to ask about it. “And we have no plans of getting a drone.”