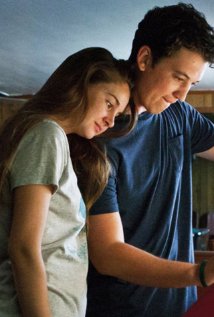 I only got to experience half of this year’s US Dramatic Competition films (unfortunately, missing David Lowery’s buzzed-about Ain’t Them Bodies Saints, which shared the Best Cinematography Award with Andrew Dosunmu’s breathtaking Mother of George).

Still, among the films I saw, I was pleasantly surprised by James Ponsoldt’s brutally poignant coming-of-age drama The Spectacular Now. With a straight-ahead script that avoids clichés, the film benefits greatly from a pair of standout performances by its young stars. Miles Teller, from John Cameron Mitchell’s Rabbit Hole (2010) and Craig Brewer’s underrated remake of Footloose (2011), perfectly embodies a high-school asshole, while Shailene Woodley (so good in Alexander Payne’s 2011 The Descendants) is spot-on as the class loner.

The Spectacular Now offers a reminder that high school sucks just as much as it did when you were a teenager. Along with last year’s The Perks of Being a Wallflower, it’s John Hughes, 21st-century style.

Elsewhere, Shane Carruth’s Upstream Color (following his much-praised, much-debated 2004 Primer) put me into an Inception-like trance, to the point of me probably needing to see it again before I can speak logically about it. Jill Soloway’s Afternoon Delight won the Best Directing award and featured noteworthy performances by Kathryn Hahn and Juno Temple, but its bafflingly regressive conclusion has left me wondering if a studio forced the director to change it at the last minute. (That said, I enjoyed it immensely.)

Lynn Shelton’s latest entry Touchy Feely was only superficially engaging; it seemed to lack the bold direction and poignancy of Humpday (2009) and Your Sister’s Sister (2011). Jordon Vogt-Roberts’ Toy’s House sent the audience into hysterical laughter (supposedly at every screening) due to a memorable performance by Disney Channel star Moises Arias as the creepy third wheel in what’s more or less a suburban Lord of the Flies. (Fans of NBC’s Parks and Rec won’t want to miss Nick Offerman in this, either.) Could Toy’s House be this year’s Little Miss Sunshine?