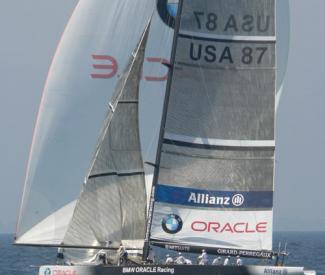 Amid reports that San Francisco taxpayers could be on the hook for more than $20 million in America’s Cup expenses because of anemic fundraising efforts by the America’s Cup Organizing Committee, today Mayor Ed Lee talked about scaling back the event and offering public naming rights to wealthy donors and Sup. John Avalos called for a Board of Supervisors hearing to look into the matter.

Following his monthly question time appearance before the Board of Supervisors, Lee was questioned about the issue by reporters, and he downplayed the idea that the city will go into the hole for its overzealous sponsorship of billionaire Larry Ellison’s big boat race.

“We’re not in the hole, but we will be if we don’t raise enough money. And I don’t want the pressure on the General Fund, and that would end up being an obligation that we have. By the way, while I’m raising, or helping to raise, some $20 million to cover that, I’m also asking all departments now that we have a, relative to what was going to be a larger race, now we don’t have as many boats, the expenses might be off so we have to kind of update it and reduce it. So with the combination of reducing the expense side and then raising some money as we’re doing from the private sector, we’re getting some new traction,” Lee said.

“We still have plans to spend upwards of $30 million to cover all the expenses, and we’re hoping that gets down to much less than that. But my goal right now is to get reports from all the departments about how to reduce their spending on this. I’m still going to try to raise the $20 million with the help of Senator Feinstein, Nancy Pelosi, and Lt. Gov. Newsom,” Lee said.

He also alluded to public goodies that he may offer to wealthy potential donors, including making a passing reference that “we’ve created some ongoing legacies, naming rights in areas that haven’t been named yet, we’ve cleared that with the Port to make sure it’s a very attractive package for them.” But ultimately, he said that city taxpayers are on the hook to pay for the impacts of this race: “This is a financial obligation that we signed on.”

Earlier in the day, the Telegraph Hill Dwellers – which has been active since the America’s Cup was first proposed in trying to ensure the event makes financial sense for the city – sent a letter to the board calling for a hearing and highlighting the ethically dubious actions by city officials that got us into this mess.

That letter follows in its entirety:

San Francisco Board of Supervisors

Dear Members of the Government Audit and Oversight Committee:

As a northern waterfront neighborhood leader who has supported bringing the America’s Cup to San Francisco since Day One, I feel compelled to urge you to take urgent action to begin to restore a profound breach of public trust while there is still time left to salvage this event.

News reports this week revealed the stunning news that San Francisco taxpayers may have to pay upwards of $20 million to subsidize the America’s Cup[1] despite public commitments stating that the event would not be taxpayer-funded and a signed contract designed to make that happen.[2]  In light of such astonishing news this close to the race, I request that you schedule a public hearing now to get answers to this critical question: what happened and how can we fix it?

5)  “we are confident that the agreement we have with the (America’s Cup) Event Authority coupled with our continued fundraising successes will ensure we meet our obligations to the city.” – Mark Buell, 2/7/12[7]

The role that Ms. McClellan has played in creating what is being referred to as a “fundraising fiasco”[9] should particularly be evaluated in light of the two ethics laws that were waived by the San Francisco Ethics Commission at the urging of members of the Board of Supervisors to enable her to shift seats across the negotiating table from her previous job working as the Mayor’s America’s Cup deal negotiator on behalf of the City into her private role working for the America’s Cup Organizing Committee.[10]  The twin dangers of reduced accountability and lax scrutiny that stem from this kind of “revolving door” between government and the private sector are precisely what the ethics laws that were summarily waived were put in place to prevent.  The question now must be asked whether the decision to waive ethics rules to allow someone playing such a central role to shift sides deserves a significant part of blame for the problems that have begun to come to light.

As a long-time supporter of the America’s Cup, I hope you will take swift action to get answers and correct the course of the event before it is too late.  Thank you very much for your time and consideration.

[2] “[T]he [America’s Cup Organizing] Committee will endeavor to raise up to $32 million over a three year period from private sources, to reimburse the City for a portion of the City’s costs (including, without limitation, costs associated with CEQA review), and lost revenues, and City expenditures required to meet its obligations under Sections 8 and 10 (including resources from the police, and public works departments, the Port, DPT and MTA). The Committee’s fundraising targets for the three year period are $12 million for year one, and $10 million for years two and three.” – Section 9.4, 34th America’s Cup Host and Venue Agreement, 12/14/10

[10] “In order to accommodate McClellan, commissioners agreed to waive two post-employment restrictions for city officials.  The first is a yearlong post-employment communications ban, and the second prohibits former city employees from receiving compensation from city contractors for two years. . . . Asked what would happen if ACOC somehow failed to raise the agreed-upon funds, placing McClellan in the position of having to explain the shortfall or re-negotiate with her former coworkers, Ethics Commission Deputy Executive Director Mabel Ng allowed, ‘If something like that happened, there might be a conflict.’ And what justification was given for waiving the ban on former employees receiving compensation from city contractors? “For that one, in the law itself, it says the commission may waive it … if it would cause extreme hardship,” Ng explained. “There would be a hardship, because … this is a great opportunity for her, and there was a short timeline for her to do it.”  Pressed on that point, Ng confirmed that the “hardship” in this case was the possibility of being barred from a great job opportunity, not the threat of financial impact or job loss. The other issue, Ng said, was that without McClellan serving in that post, the committee’s fundraising effort might not be successful. “It just seemed like, you need to have somebody take charge,” she said. “The committee may suffer without her at the helm. If she were not able to do that, the committee — which plays a very crucial role in this — may not be able to meet its obligations.’” Mayoral staff member to direct America’s Cup Organizing Committee, SF Bay Guardian, 4/7/11