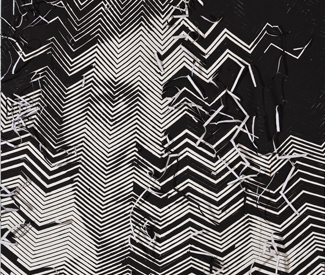 VISUAL ART Several recent, notable group exhibitions have me thinking a bit more actively about the roles curators play as artists in the shows they assemble. As much as DJs or editors, curators are present in their shows as artists, sometimes demurely, sometimes not.

As curator of the “Disrupt” two-person show at Highlight Gallery, Kelly Huang has shrewdly assembled a pair of artists whose work reinforces each other. Seen together, the paper-based works of London’s Marine Hugonnier and Cairo’s Taha Belal, create a kind of duet of interrelated working styles. Both artists use silkscreen to recast newspaper and magazine pages with intricate designs and blocks of color. Hugonnier tends to work in series, appropriating several consecutive days worth of front pages from the same newspaper during the course of pivotal political events, then blocking out images with bright primary colors in a way that recalls both Ellsworth Kelly and Piet Mondrian. Belal prefers delicate tiled pattern work overlaid on full color ads, applied in a way that confuses, heightens, and twists the intended message on the page. Through Sat/2, Highlight Gallery, 17 Kearny, SF; www.highlightgallery.com.

When a gallery with considerable reach decides to mount a thematic exhibition, it can be both impressive and almost unruly, as with Fraenkel Gallery’s sprawling “The Unphotographable” show, featuring images by Alfred Stieglitz, Man Ray, Richard Misrach, Glenn Ligon, Wolfgang Tillmans, Diane Arbus, and many others. Truthfully, there’s probably too much here, but there are several gems in the gallery, lightly organized to highlight attempted photographic captures of the sublime, the disembodied, the transcendent, and the elusive. The most potent works in the show — among them Gerhard Richter’s September, an image of his 2005 painting, itself a conceptual model for abstract representation — counteract their own assertions of verisimilitude in favor of something more circumspect and self-aware. Through March 23, Fraenkel Gallery, 49 Geary, SF; www.fraenkelgallery.com.

For logistical and practical reasons, it’s fairly uncommon to hear of curators commissioning works for a gallery show, but the results can be intoxicating, as with “Remembering is Everything” at Alter Space. Bean Gilsdorf and A. Will Brown got six artists to contribute a work based on his or her own remembering of the same original video, which was destroyed after viewing. Befitting the premise, the works in the show contribute to a general field of reverberating feedback, each one in this context providing you incomplete points of view on an unknown experience.

Themes of recursion, repetition, and fugue recur, as in Stephen Slappe and Kate Nartker’s looped video works that both posit unresolved narrative chords, and Nancy Nowacek’s performance Circuit (As I Caught), in which mysterious packages filled with objects recalled from the video appear at the gallery each day of the exhibition. The effect is like an enacted Haruki Murakami dream sequence, and you’re immediately drawn into the activity of fabricating and assembling the show’s affects and objects into a kind of tenuous, vague, and poignant gestalt. Through Feb. 23, Alter Space, 1158 Howard, SF; www.alterspace.co.

Sometimes, the curatorial conceit is basically an excuse, as with “While We Were Away” at 941 Geary, which the press release says is “composed entirely of artists [curator Tova] Lobatz has become aware of while traveling.” Despite the throwaway premise, some of the work — especially by Sten Lex — is impressive. Sten Lex, the Italian stencil duo, makes arresting op-art flavored stencil portraits usually on grand scale on the sides of buildings; here on panels. What differs from the street-art norm in their work, aside from the precise Ben-Day rendering, is the not-really-offhand way they leave the painted stencil affixed to the substrate to let it peel or erode over time, a swerve that makes the painting’s correlation to the original photo more precise as it ages. Their four untitled works in the gallery demonstrate various points in that progression. Through March 2, 941 Geary, SF; www.941geary.com.

Kehinde Wiley’s flashy, uber-hip portraits have made him the international go-to darling of both the upmarket and Juxtapoz crowds. Expect high craftsmanship and an eye for drama. “The World Stage: Israel,” Feb. 14-May 27, Jewish Contemporary Museum, 736 Mission, SF; www.thecjm.org.

The word “visionary” is perhaps overused in the world of architecture, but the jarring, psychologically charged work of Lebbeus Woods warrants the use. The recently deceased architect’s work will be represented by 175 drawings, renderings, and models in this career survey. Feb.16-June 2, San Francisco Museum of Modern Art, 151 Third St., SF; www.sfmoma.org.