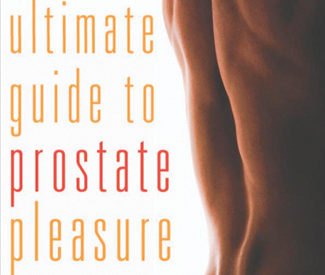 SEX It’s the end of an era at local sex toy and education company Good Vibrations: Dr. Charlie Glickman is stepping down from his position as education program manager for the national retailer.

The man should know. Since 1996, the sex educator has been on the frontlines of trying to get accurate sexual health information to the Bay Area, and has taught many a prostate class through Good Vibes. His book release party on Thu/31 kicks off a North American prostate play workshop tour sponsored by the sex toy company, and looks to target an audience that mirrors the people who have shown up in Glickman’s sex ed workshops throughout the years: male-female couples, solo women, gay men, the college-aged to senior citizens.

Glickman says that the first challenge to exploring prostate pleasure exists on a physical level. “For most straight men, and topping queer men, sex happens outside your body as penis-oriented sex.”

“The basic story goes like this,” he continues in the guide. “Real men don’t get fucked — that’s for women, fags, and sissies. Because receiving penetration is usually viewed as the woman’s role in sex, a man may be worried that he isn’t fulfilling the man’s role if he takes a turn catching instead of pitching.”

Leaving the “get it up, get it in, get it off” mentality behind and moving into a receptive role can result in a new feeling of vulnerability. But men can expand the scope of what sex means to them by exploring the world of prostate play. According to Glickman, letting go of ass-based insecurity can open up a whole new world of sexual pleasure.

“Many straight men have said ‘I tried this and it completely changed our sex life,'” Glickman says. Getting to know the prostate can be a game changer.

For example, in the chapter titled, “Prostate Massage,” one can learn all about how to use fingers properly: “When it comes to the prostate, poking is exactly what you don’t want to do! It may have felt great on your shoulder just now, but the prostate is another matter entirely,” says the guide. “We’ve spoken with a lot of men who complained about finger tips poking and stabbing their prostate, which can feel too intense, uncomfortable, or even painful.”

The book seeks to address both psycho-social concerns while providing practical how-to advice by carefully delineating between the multiple ways that the prostate can be stimulated and sexual orientation.