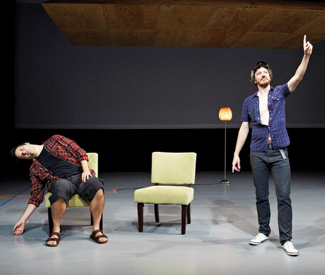 THEATER The chill air had no snow in it. Instead, a particularly nasty outbreak of influenza whipped through the city, leaving a fine coating of mucus on the ground. Still, New York City looked beautiful as the various performing arts festivals that cluster around the annual meeting of APAP (the Association of Performing Arts Presenters) all revved up for a fat two weeks of shows this January.

These festivals, pitched to out-of-town-presenters and general audiences alike, include Under the Radar (an international but New York– and American-heavy program at the Public Theater), PS122’s Coil festival (specializing in theater but including some contemporary dance and performance), American Realness (a concentrated dose of leading contemporary dance/performance on the Lower East Side), Other Forces (a program of new independent theater presented by Incubator Arts Project, itself originally a program of Richard Foreman’s Ontological-Hysteric Theater), and the brand new Prototype festival (whose niche is new, chamber-sized opera-theater).

Under the Radar is the daddy of them all. Founded by longtime new-work maven Mark Russell (formerly of PS122) and now in its ninth year, Under the Radar has become more concentrated of late, partly in reaction to the other specialized festivals that have cropped up alongside it.

Festival director Russell described the trajectory in a recent phone conversation. “It’s a very interesting time, because by the ninth year you’re a fact on the landscape. People are beginning to take you for granted,” he said with a laugh. “Yes, there are a lot of other festivals now; it’s sort of become festival central in these two weeks in January, which is a little crazy, and I don’t recommend it. But it has created its own scene, in a way. I think that’s great. We started out trying to be big and trying to encircle a lot of the work that was going on downtown and around the world. Now, I’ve actually shrunk the festival to be more surgical and specific. Two years ago we were doing 21 things, and this year we’re doing 12, which feels more comfortable and better. We’re trying to go deeper in each of these performances and support them better, and let other people curate their way with the other festivals as well.”

UTR’s program this year included premieres by some leading American new-work companies, including Philadelphia-based Pig Iron (whose Chekhov Lizardbrain came to San Francisco as part of the 2011 FURY Factory Theater Festival). Pig Iron’s Zero Cost House is a simply but shrewdly staged, intriguingly unexpected collaboration with Japanese novelist-playwright Toshiki Okada (founder of theater company Chelfitsch). It unfolds an autobiographical dialogue between the younger and the present-day Okada over Thoreau’s Walden across a shifting set of actors and related characters (including a downbeat and down-at-the-heel Thoreau). Its po-faced humor belies an ultimately serious exploration of enduring ideas about our relation to society, political commitment, and art’s function amid the insanity of a status quo represented by the overwhelming indifference to the Fukushima nuclear disaster. This was a stimulating call to thought and imagination as nothing less than action toward survival.

Questions about art’s social role and power, as well as the lines joining the mundane to the great political and narrative arcs of the age, ran through much more work besides. One of the fresher, quietly unsettling surprises in this respect was Australian company Back to Back’s brilliantly staged Ganesh Versus the Third Reich, a deceptively low-key exploration of power and marginality by a five-member ensemble that includes actors with varying mental and physical disabilities. On a largely bare stage repeatedly transformed by large transparent curtains into a gorgeous shadowbox landscape of mythological proportions, the riveting cast plays out its own inner turmoil along an extremely subtle line separating the ridiculous and the profound, meanwhile complicating our perception of what is in fact real.

In a highly anticipated offering, New York’s Nature Theater of Oklahoma premiered eight hours worth of its Soho Rep–produced opus Life and Times (Episodes 1-4) — more episodes are apparently forthcoming — which channels the verbatim childhood reminiscences (replete with uhs, ums, likes, whatevers, and oh-my-gods) of a middle-class American 30-something (company member Kristen Worrall) through an evolving set of choreographed, highly stylized, mostly-musical ensemble performances. Again, as directed by founders Kelly Copper and Pavol Liska, the banal is elevated to the level of the epic, but in a precious and ironic way that, for all its precision and the seriousness of its core idea, leaves one feeling mostly empty, bored, and frayed by the text’s endless assault of half-articulate and overly familiar riffs on family, friends, awkwardness, first kisses, religion, and so on. With the dialogue divvied up among an entire ensemble in coordinated outfits, vocal harmonies, and group dance steps, we’re being made to hear again what we hear all the time, which invites certain revelations, but they seemed precious little compensation for the tedium of it all.

Further downtown at American Realness, where founder Ben Pryor’s astute gathering of contemporary dance-performance is now in its fourth year, there was much greater and subtler impact to be had from a slim hour spent in a largely unadorned room with performance maker Jeanine Durning. She also set forth a barrage of speech, a continuous stream of consciousness that touched on many subjects and her own self-consciousness, but in that simple score came a powerful emotional encounter and myriad questions about language, communication, reason, madness, art, and subversion that left the audience slightly stunned and reeling in their chairs.

American Realness had its much-hyped disappointments as well, in particular Trajal Harrell’s Antigone Sr., a self-conscious and dull three-hour riff on fashion and voguing that is part of his seven-part opus, Twenty Looks or Paris Is Burning at the Judson Church, which sets out to explore a dialogue between the post-modern dance movement of 1960s Greenwich Village and the voguing scene taking place uptown in the same era. A provocative enough project, but this piece had little to recommend in terms of ideas or movement.

There were more modestly-scaled but far more engaging works to be found at American Realness this year, including Miguel Gutierrez’s collaboration with Mind Over Mirrors (musician Jaime Fennelly), Storing the Winter, a supple, sinewy and raucous solo dance-for-keeps; and Faye Driscoll’s dynamic, ecstatically unhinged duet, You’re Me, which comes to SF’s CounterPULSE in March. While BodyCartography Project’s Super Nature (co-presented with the Coil festival) was a mixed success, it nevertheless made me want to see them again when they bring Symptom (also to CounterPULSE) in February. Another AR offering not to be missed is Frankfurt-based American and former Forsythe dancer Anthony Rizzi’s hilarious, ridiculously reasonable, and super-shrewd An Attempt to Fail at Groundbreaking Theater with Pina Arcade Smith, which plays locally at Kunst-Stoff Arts Feb. 7–9. *