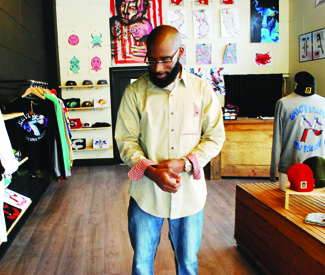 STREET SEEN While larger clothing companies are free to define their brand through glossy print campaigns and billboards staring out impassively over downtown shoppers, the little guys look elsewhere to establish identity.

Last week I went to visit a silver grill, affixed to the grin of a one Edwin Haynes, the unapologetically pierced founder of graphically subversive clothing line Sav Noir. Think T-shirts covered in upside-down crosses, hot nuns making out, and a priest hoisting a Bible, gun, and shotglass — that would be the brand’s first collection, now available. Think a tough black-and-white color palette setting off designs by local artist Henry Lewis. Also think about a back room of an unmarked studio space, which is where I was last week checking out his works of the devil, artfully arranged on an L-section sofa.

Haynes talks mess about Catholic school while members of his team — event promoter Traci P of female hip-hop crew Sisterz of the Underground and Bogl, bass-and-beat DJ and event producer — look on.

You can cop Sav Noir’s hats and tees at Infinite (www.infinitesf.com), True (www.trueclothing.net), and Santa Cruz’s So Fresh (www.sofreshclothing.com). But you may as well make a night of it. The brand also hosts The Gift, a first Sunday dub-trap party at Vessel starring DJs Ruby Red Eye and Atlanta’s DJ Holiday. Bogl spins Tuesday nights at Monarch. The events look like they crack — the Jan. 26 launch at 1AM Gallery for the new line attracted a crowd that spilled out into the SoMa streets.

“At the end of the day, we’re all we have,” says FAZE Apparel (3236 21st St., SF. www.fazeapparel.com) co-owner Johnny Travis as he tours me around his sunny Mission space, past the racks of his own line’s SF-made button-downs with printed cuffs, peculiar pockets — just intricate enough to catch the eye, but not so crazy that they can’t be basics.

FAZE also hawks ace $21 beanies, made in LA with leather tags affixed here in the city. The line’s hoodies are lined with nursery school zoo prints, part of the “Animal City” collection that also includes a tee with snarling pumas and the words “Easy Pussy” in heavy metal slant letters. It’s streetwear, but with details that make it pop.

The shop also has one of the mores interesting arrays of hyper-local brands I’ve seen: there’s All Out Foul, a San Mateo line that supplies tees to the quickly-growing legions of Niners fans. Those tees sit alongside nautical-inspired ones designed by Charlie Noble, an Alameda Coast Guard vet. The different brands are great for the store, Travis tells me. The days of single-brand customers, he says, are over.

And FAZE (an acronym for “Fearless and Zealous Everyday”) is nothing is not group-oriented. “We don’t want to be an intruder to the community,” the SF native Travis tells me, wary of the fact that he just moved a business into a part of the Mission where rents are skyrocketing and many residents feel displaced. “We want to be a part of it.”

To that end, the regular art parties. At January’s FAZE event, the paintings created by the line’s artists on-site, made in front of the eyes of party attendees right there in the shop, were sold to benefit the Boys and Girls Club down the street. At the next event (at the shop Feb. 8, 6-10pm, free), proceeds will round another corner to another neighbor of FAZE, going to low income student support service Scholar Match. Of course, you’re welcome to buy clothes at the party.

“I know a lot of people try to get their stuff in the hands of celebrities,” says Travis. “But that’s not what we’re about. It’s people like you and I who carry brands.”