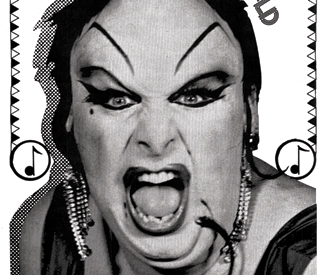 SUPER EGO One of my supreme happy places, apparently, turned out to be the packed dancefloor of an underground fundraiser for Radical Faerie Burning Man camp Comfort and Joy, right around 3am a couple Fridays ago, when the drag queen DJ dropped “Rock the Casbah” and some behooded elfin rogue’s giant LED rainbow wings lit up and blinded me. Joe Strummer smiles from heaven, surely.

Alas, that drag queen, mi amiga grande Ambrosia Salad, will soon join the current nightlife exodus to Los Angeles, to follow her twinkling star (and cheaper rent) along the path to immortality — or at least an all-night churro cart. Can we get one here please thanks. But just when I despair of the city emptying of its precious idiosyncracies and after-dark characters, someone amazing pops up to charm the hotpants off of me and remind me of both San Francisco’s resilient weirdness and its cyclical subcultural nature.

“Oh, I moved out of the Castro when the drones moved in. Everyone started wanting to look the same, dress the same. It really took the fun out of the gay scene, these marching costumes coming in and stamping out the magic.” That’s twinkle-toned Todd Trexler, poster artist, AIDS nurse, and legendary bon vivant, speaking over the phone — not about about the samey-samey Wienerville the Castro has become, but the Castro clones of the mid-1970s. For all the renewed interest in the workboots, cut-offs, and mustaches of pre-AIDS SF gay culture (see local director Travis Mathews’ exciting, upcoming, James Franco-starring Interior. Leather Bar, which imagines the lost orgy footage from classic homoerotic/gay panic slasher flick Cruising and wowed ’em at Sundance last week), it’s good to remember there were also some fabulous butterfly dissenters to that macho wannabe world.

Trexler was a player in one of the seminal moments of alternative gay culture — after snagging an art degree from SF State, he designed the posters for the queer-raucous, acid-kaleidoscopic performance troupe The Cockettes’ first official shows, as well as the Midnight Movie series, later the Nocturnal Dream Shows at the Palace Theater in North Beach in the early ’70s, back when North Beach was a magnet for free-lovin’ freaks and nightlife oddities. (See, anything can happen). Now, he’s reprinted many of those iconic and visually stunning “Art Deco revival meets Aubrey Beardsley louche meets underground comics perversion” ink-and-photo masterpieces for surprisingly affordable purchase at www.toddtrexlerposters.com.

Divine in her iconic, kooky crinoline (“Basically she just threw on a bunch of stuff from the trunk of our car and voila, Divine!”) outside the Palace of Fine Arts for the “Vice Palace” play and, later, starring in Multiple Maniacs and “The Heartbreak of Psoriasis”; Sylvester looking his sultry best for a New Year’s Eve concert, and featured on a controversially explicit piece for decidedly hetero rock outfit the Finchley Boys; Tower of Power, Zazie dans le Metro, Mink Stole as Nancy Drew, the Waterfront gay bar — Trexler’s platinum stash of memorabilia will reinvigorate anyone zoinked out by our increasingly conformist, consumerist moment. (Trexler was prodded into reprinting by my favorite classic SF eccentric, Strange de Jim.)

And hey, there’s some hope for a freakish future, even: lauded local theater troupe Thrillpeddlers, which includes a couple gorgeous surviving Cockettes itself, will put on the Cockettes’ 1971, Trexler-postered “Tinsel Tarts in a Hot Coma” starting March 28, www.thrillpeddlers.com.

Trexler’s importance to gay culture doesn’t end with his glamourous posterization, however. After his ’70s time “crafting assemblage sculptures from gems found at Cliff’s Variety Store, hand-drawing the posters in the flat at 584B Castro Street, smoking weed with Sebastian [Bill Graham’s accountant, who instigated the whole Nocturnal Dream Emissions insanity], and hanging out at the Palace and the Upper Market Street Gallery,” he moved down to Monterey and became a registered nurse, cared for the first GRID, aka AIDS, patient in the area, and pitched in on the groundbreaking early work on the epidemic with UCSF and the National Institutes of Health.

“What troubles me most now,” he says, reflecting on his experience, “is the rising prevalence of HIV infections among young gay men.” Some cycles don’t need repeating, k?

Heck yes — the classic hip-hop soul joint is back, scooping you up for free after the Oakland Art Murmur’s First Fridays blast, which is amazing. Brown Sugar crew Jam the Man, The C.M.E, and Sake 1 spin with the Local 1200 crew on the street and then take it inside to the spanking new Shadow Lounge (formerly Maxwell’s). Welcome back, fellas.

Moody-poppy Detroit techno pretty boy is a favorite around these parts. He may have started the recent (sometimes regrettable) trend of DJs singing, but he’s one of the best at it — and his compositions aren’t afraid to get deep and edgy.

Icon Ultra Lounge is dead — please welcome new, neater venue F8 in its place. Also, after a horrific hit-and-run accident last year, beloved and crazy DJ Toph One is alive! He’s returned with his crew to reboot this eclectic-tuned early evening fave every Friday to fly you into the weekend.

Holy Balkans, Batman! Six years of wild, whirling, stomping, shouting Romani-inspired music goodness from one of the best and most unique parties anywhere, with DJ Zeljko, the Inspector Gadje brass band, and a Balkan bellydance blowout with the inimitable Jill Parker and the Foxglove Sweethearts. Get there early.

OK, the headliner for this event is actually the excellent old-school California techno wizard John Tejada (along with fellow mage Pezzner playing live) downstairs in the big room of Public Works — but the big news is a reunion of two of SF’s wiggy, wowza Hardkiss Brothers all night long upstairs in the loft. Bigness!