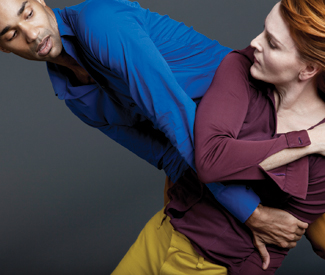 
DANCE The Bebe Miller Company’s A History at Yerba Buena Center for the Arts last weekend proved to be both exhilarating and frustrating. First, the good: watching two gorgeous dancers engage each other in one encounter after another — both huge and tiny — for over an hour. Gradually, they emerged as two completely different and yet ever-so-compatible characters.


Angie Hauser can look almost demure, but there is such fierceness to her presence that you don’t want to get on the wrong side of that intensity. Darrell Jones, a tall, lanky dancer with limbs that can (and do) shoot in all directions simultaneously, is unstoppable — yet he also has teasing sense of humor about him. If Hauser could be almost earnest in her focus, Jones brought an often relaxed, quasi-casual quality to their work.


In the program notes, Miller says that History is a work about making work, specifically about having worked with Hauser and Jones for the last decade. On video Miller is a tiny figure, planted like a tree in a lush meadow, telling us that her body — and by implication that of her dancers — is "possessed by past dances." So History is a piece about excavating shards, remembering, or as one of the texts says, "remember remembering," everything that goes into the creative process. That’s a tough assignment. While conceptually intriguing, the 70-minute work didn’t completely convince because it didn’t stand as its own artifact with its own parameters. Hence the frustration.


History‘s collaborators, including the choreographer and her long-time dramatist Talvin Wilks, conceived of the work as a multi-media experience in which spoken and projected text, video images, and live dance would collide with each other. Unfortunately, the co-existence of these elements too often didn’t spark, proving to be more distracting than illuminating. Viewing History thus became an exercise in both reveling in and rebelling against the experience.


Even as History continued to slip one’s grasp, it was beautiful to watch. Mimi Lien’s semi-transparent panels enveloped the dancers in a neutral yet luminous space. At its best moments, Lily Skove’s video ran alongside the dancers and sometimes almost reached to grab them. The opening and closing images resonated particularly well. Michael Wall and Darren Morze’s score ranged from soft humming to a dance-y tune that sent the performers into paroxysms of joyous.


But it was Hauser and Jones who carried History. Their rich interactions were in a constant state of flux. Some were funny, some contentious; others were intimate, still others playful. Their sense of ease with each other may have developed over the last decade, but on stage it didn’t make any difference where it came from. Hauser is the verbal dynamo to Jones’ high-speed physicality; when she exploded into one of her speed monologues, he responded with a tease, or by simply rolling off their shared bed. They wearily watched each other using space, but also companionably loped around the periphery and engaged in hand games at the table. They did things as ordinary as taking off a partner’s shoe, or kneading one another like a piece of rising dough. If he came close, she flipped him off with a gesture. In an extended contact-improv inspired section, their bodies attempted to fuse almost to the point of eroticism. But they didn’t go all the way there.


One of History’s ingenuous devices was the use of headphones — the big, old-fashioned kind. The dancers raced to them periodically for a kind of grounding. Were they gateways to the past or did the simple act of listening — or yakking back — offer a respite from the physicality of moving? The headphones also highlighted the differences between the two dancers. Hauser devoured whatever she got from them, while Jones’ reactions were a lot more nonchalant.


Ultimately one walks away from History, imperfect vehicle that it is, with a sense of two dancers whose humanity is so closely integrated with what they do that you couldn’t tell the difference between the person and the persona. It was a rich idea to take home.