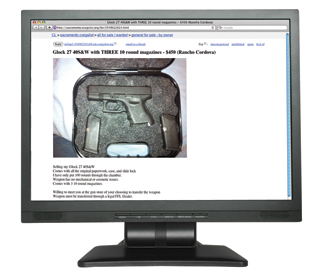 Somewhere in rural Southern California, a Craigslist user is offering a Hi-Point 9mm carbine, a kind of semi-automatic rifle, for “straight trade” in exchange for a quad or dirt bike. A post from Craigslist in San Mateo screams “i NEED AMMO” — in bulk, for various kinds of rifles. And across the state, Craigslist ads for Glocks, Berettas and other handguns commonly turn up in the mix, often instructing prospective buyers to respond by text message only.

Selling guns is explicitly prohibited on the world-famous website with the signature purple peace sign. Firearms, ammunition, and less-lethal weapons hover near the top of Craigslist’s prohibited items roster — but a cursory search reveals dozens of firearms-related ads in various US cities. Meanwhile, the San Francisco-based classifieds forum is just one of thousands of websites where people who want to obtain guns can make discreet connections with private sellers.

Gun listings on the Internet make it extremely easy for people to buy firearms with the click of a mouse and no questions asked. But in many cases, this activity is perfectly legal, website terms-of-service notwithstanding.

Federally licensed firearms dealers are obligated by law to conduct background checks on all buyers, whether they’re selling at a gun show or online. But that’s not the case for unlicensed individuals who aren’t officially in the business of dealing weapons. And these private transactions — which are increasingly initiated online — account for an estimated 40 percent of U.S. gun sales, according to estimates by the U.S. Department of Justice.

Under federal law, there’s nothing barring an unlicensed individual from advertising a gun for sale online and then selling the weapon to a person living in the same state without the involvement of a licensed dealer. California law does go further to require the involvement of a licensed dealer in firearms sales, but the proliferation of Internet ads shows how difficult that is to regulate.

As long as the seller isn’t knowingly selling to someone who’s prohibited from gun ownership due to a violent criminal conviction or some other reason, federal law imposes no obligation to perform a background check for in-state transfers. This leniency, combined with the unprecedented availability of weapons online, is a focal point for legislative reform efforts.

FROM CRAIGSLIST TO ARMSLIST

The Guardian recently heard from a distraught Craigslist user from Illinois who’d launched a one-person crusade against a persistent string of gun ads posted in his hometown. “It’s an anything goes, no-holds-barred, 24/7 gun show,” he charged, adding that he’d flagged posts for AK-47s, AR-15s, high-capacity magazines, and other combat-style weapons listings for removal.

He spoke on condition of anonymity for fear of retribution. “The gun crowd outnumbers other folks around here,” he explained, and forwarded some profanity-laden responses he’d received after calling attention to the issue in an online forum and urging other community members to help him flag the posts.

Craigslist staff members were responsive to emails alerting them of the posts, he said, but the measures they took weren’t always effective. Ads were removed a few days after being flagged, but many just cropped up again later. Online chatter suggests that sellers remain undeterred. “The liberal whiners flag the ads, then you just repost it,” one user advised in an online message board.

Susan Best, a press contact at Craigslist, didn’t respond to several Guardian queries seeking information about how the company is handling the issue of unpermitted gun postings.

Despite the Illinois crusader’s sense of futility, some private gun dealers have migrated away from Craigslist after experiencing pushback from community members who consistently flag the unpermitted posts. The number of gun listings on Craigslist barely registers in comparison with the thousands of weapons readily available on ArmsList.com, a site created to make it easy to shop for guns online.

ArmsList was started in 2009 “by gun owning and gun loving Americans,” according to the website, “after seeing firsthand how the popular marketplace sites on the Internet shun firearms.” Anyone casually browsing ArmsList gun ads can view phone numbers and emails of sellers without creating an account, and the website does not get involved in sales.

Disturbingly, the New York City investigation found that more than half of the private gun dealers contacted via ArmsList said they’d be willing to sell to buyers who said they couldn’t pass a background check. That’s illegal, but there isn’t much currently in place to prevent it from happening.

Under California law, an unlicensed individual can sell a gun to another individual if both seller and buyer go through a fully licensed dealer, known as a Federal Firearms Licensee (FFL). The FFL files paperwork for a background check, and releases the weapon only after the buyer’s name has cleared and a mandatory 10-day waiting period has passed.

“Bottom line: If you want to sell a firearm, you need to go through a licensed dealer,” says Michelle Gregory, a spokesperson for the California Department of Justice. “Even if they’re advertising online, they’ve still got to go through it.”

California’s rules are some of the strictest in the nation because lawmakers closed the “private-sale loophole” that exists under federal law, says Ben Van Houten, managing attorney at the San Francisco-based Law Center to Prevent Gun Violence. The loophole, also known as the “gun show loophole,” refers to the federal law provision allowing in-state transfers of firearms between private individuals without FFL involvement.

“The issue of online gun sales is most dangerous in states that have not closed the private-sale loophole,” Van Houten says. “It’s easy to find people you can buy a gun from, without having to pass a background check.”

REFORMS ON THE HORIZON

Closing the private-sale loophole is a key piece of a broader gun-law reform agenda unveiled by President Barack Obama Jan. 16. The Law Center to Prevent Gun Violence applauded the move. “Obama’s commitment today — to support federal legislation to fix our background check system and to ban military-style assault weapons and large capacity ammunition magazines — confirms that we are at a historic moment,” the organization noted.

The state of New York recently passed gun laws that surpass even California controls, Van Houten noted, because new safeguards were enacted to regulate ammunition sales. In California, several legislative efforts have sought to tighten ammo sales, which are currently unrestricted, but none have been enacted into law.

On the federal level, US Sen. Dianne Feinstein has also introduced legislation to ban high-capacity magazine clips, which can quickly feed 30 rounds of ammo into a rifle. As the Obama Administration advances its gun-law reform agenda, Bay Area residents have also been stirred to action.

San Francisco celebrity Craig Newmark, who founded Craigslist in the mid-1990s and isn’t involved in its day-to-day operations, recently urged his followers to support an effort to prevent gun violence.

“One month after the tragic mass shooting at Sandy Hook Elementary School, a group of Newtown, Connecticut citizens have organized to honor the lives lost by unveiling a national grassroots initiative committed to preventing similar tragedies,” announced a Jan. 14 post on Newmark’s website, CraigConnects. “The initiative’s a nonprofit called Sandy Hook Promise,” and it’s “asking folks across the country to make a promise to encourage and support common sense solutions. We must get all of America to sign the Sandy Hook Promise.”